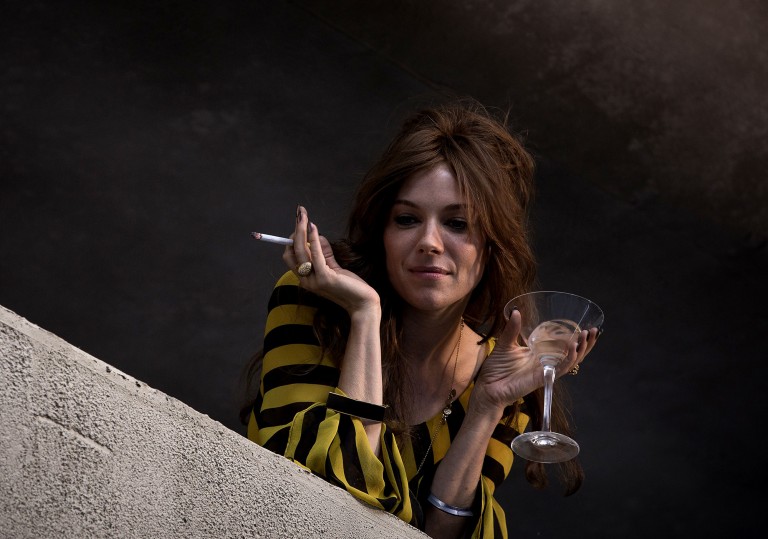 Love Ben Wheatley’s Down Terrace and Kill List, and like his Sightseers and A Field in England.

Through the broad belly laughs it reaches dizzying, despairing heights.

A multi-level blueprint of the UK’s class politics, exposing the delirious ruins of Thatcher’s utopian enterprise.

“Sometimes he found it difficult to believe in a future that had not already taken place.” In Ben Wheatley’s High-Rise, this line appears as an introductory voice-over from protagonist Robert Laing (Tom Hiddleston), who, three months after he has moved into the titular tower block, is taking stock and scribbling down his recent experiences.

One sure sign of the self-alienating transformation that Laing has undergone since his arrival is the fact that he now refers to himself in the third person. Another is the spectacle of him calmly barbecuing and eating a dog on his filth-strewn 25th-floor apartment balcony. Meanwhile, Laing’s words, with their confusion of past, present and future, clearly set out the film’s status as a work of postmodernism, as much a dizzying blueprint for who we are today as it is a forward-looking allegory of the festering political divisions of 1970s Britain.

Laing had moved into this new brutalist edifice as “an investment in the future”, but in order to understand how his stay there has ended up in such unrestrained madness, we must revisit the events that took place in the intervening quarter. Accordingly the film too is Janus-faced, looking backwards and forwards, up and down, to take in the tower’s panoramic purview. Itself set in 1975, High-Rise glances back to the homonymous 1975 novel by JG Ballard – but it can also look forward (with hindsight) to the prime ministership (commencing in 1979) of Margaret Thatcher and her programme of desocialising privatisation that has created the world in which we now all live. The private building after which the film is named, with its built-in gym, pool and supermarket, is a hermetic world unto itself, a microcosm of society’s rigid class structures.

Even if the building was conceived by its architect Royal (Jeremy Irons) as “a crucible for change”, the same old hierarchies keep reconstituting themselves. The working class – embodied by unemployed documentarian Wilder (Luke Evans), his serially pregnant wife Helen (Elisabeth Moss) and their ever-expanding brood of children – occupy the “lower levels”. At the other extreme, Royal himself lives in the 40th-floor penthouse, nostalgically remodelled by his aristocratic wife Ann (Keeley Hawes) to resemble her childhood “country home” (complete with farm animals) so that she can “reassert herself on the rung”. In between are the professional middle classes – people like Laing who, in keeping with his career as a physiologist, looks upon the building as a living organism with its own pathologies.

As Wheatley (Kill List, A Field in England) documents the breakdown and restoration of order in a building that is, as Royal puts it, “still settling”, there is something decidedly kaleidoscopic about the entire enterprise. Dialogue and sounds leak from one scene into the next; Laurie Rose’s mobile, often hallucinatory cinematography swirls and reels, taking in the building and its many residents from all angles; and the metaphor of party politics is realised in a series of actual gatherings where class comes out to dance.

Unable to comprehend why his architectural experiment has not resulted in the great social metamorphosis that he had intended, Royal at first supposes that he has omitted some “vital element” – but by the end, amidst a violent revolution in which no real change takes place, he realises, “It wasn’t that I left an element out – it was that I put too many in.” This represents a note of self-conscious self-critique from a film that mixes comedy and horror, the satirical and the scatological, the high and the low, into a disorienting, dystopic mess, and asks us to revel in the beautiful, bewildering chaos of its manifold elements.

As the grand architect behind this folly, Wheatley has crafted a sublime complex that accommodates all manner of uncomfortable ideas about the atavism and entropy of modern(ist) living. With its bestial behaviours and carnivalesque capers in a ’70s milieu, the film would make an excellent double-feature with Aaaaaaaah!, directed by Wheatley’s friend Steve Oram.

Yet High-Rise also stands on its own as a macabre mythologisation of the libertine excesses to be found in both the human heart and the free market – of any era. Watching it is like seeing a multi-storied classic richly unravelling before, during and after its proper time. Such is the density of its different levels that repeat viewings will be amply rewarded – although cinemagoers will be unlikely to maintain Laing’s middle position on the film’s many polarising provocations.

Love Ben Wheatley’s Down Terrace and Kill List, and like his Sightseers and A Field in England.

Through the broad belly laughs it reaches dizzying, despairing heights.

A multi-level blueprint of the UK’s class politics, exposing the delirious ruins of Thatcher’s utopian enterprise.