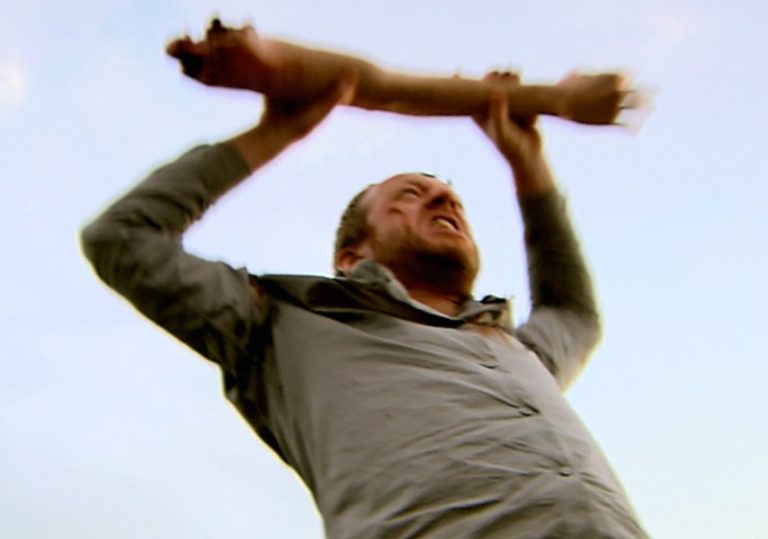 What the hell is this?

This film is so joyous it makes you want to pour an entire bottle of vodka on to your crotch.

Let’s not mince words: Steve Oram is a master filmmaker. He’ll be known to British audiences for his co-starring role in Ben Wheatley’s 2012 comedy-horror hybrid, Sightseers, in which he played one half of an oddball twosome traversing the English countryside and who take a hatchet to the skull of anything or anyone that doesn’t chime with their quaint Midlands sensibilities. Aaaaaaaah! is his debut feature film as writer and director, a transgressive situationist comedy which is also one of the great British films of the new millennium. Explaining why is not going to be easy.

The film opens with Oram dressed in a grey car-coat loping into a woodland clearing alongside a similarly attired cohort played by Tom Meeten. He removes a photograph of a woman contained within a cheap gold frame from his pocket, briefly weeps, tosses it onto the ground and the pair proceed to urinate on top of it. No dialogue has been spoken up until this point. Meeten dutifully wipes the tip of Oram’s penis, and only then do the pair engage in brief discourse which comprises of guttural whelping and groaning. No actual words. Though it is never officially spoken, Aaaaaaaah! takes place in what appears as a bizarro planet Earth where human beings are in a state of reverse evolution, where they’ve reached their physiological and intellectual apex and now the scale is sliding back the other way. Back down to the bottom.

These men are of a light simian persuasion, yet the film has very little in common with the fantastical, aggressively satirical likes of Planet of the Apes. The conditions and social rituals of lower-middle class life – including dangerously cavalier attitudes towards sex and death – have been delicately supplanted into this alternate reality, and human beings are now reconstructed with an ape-like sense of inner consciousness, where the nature of violence, sexual hook-ups, personal comportment, communication, taste and competition are all irrevocably altered from the norm. Yet, things haven’t changed so much that life is now based on completely random impulses. The basic rules still stand.

It recalls Pasolini’s Salò, or Buñuel’s The Discreet Charm of the Bourgeoisie – both withering satires in their own right which work because the directors formulate a convincing world which is just similar enough for the films to land their political barbs, and just different enough for the characters to remain empathetic, even if morally/ethically damaged. Greek director Yorgos Lanthimos has long been carousing in this particular play-pen of cinema with works like Dogtooth, Alps and The Lobster, though there’s something about Oram’s film which is beautiful and transcendent because of its near-total dearth of cynicism.

The reason that Aaaaaaaah! is so utterly successful as a piece of cinema is that it never directly acknowledges its satirical intent, playing out a story which never once sees Oram taking a brash side-swipe at a type of person, an institution or an aspect of modern culture (Prince Harry excepted). Its world is fully immersive, and is all the more beguiling because we never have The Rules schoolmarmishly delivered to us as soon as the film starts. Oram leaves things open for himself, so he has the option of adding a surprise layer later on, or altering one that already exists. The scuzzy, hand-held, juddering cinematography – atmospherically augmented by the fact that it’s always drizzling rain – comes across like the film is adhering to the guiding strictures of the uncouth world in which it inhabits, that there’s man-monkeys in front of and behind the camera.

Effective world-building is contingent on everyone involved being in on the joke, or at least on the same ideological page. This is one of the great successes of Aaaaaaaah! – everyone who appears on screen gets what’s going on, there’s not a single character whose appearance shatters the illusion. Indeed, Oram is so trusting of his cast that he makes amusing animal kingdom rankings, at one point introducing a shop security guard whose dialogue is slightly different from everyone else’s, suggesting he’s a slightly different, more respected and potentially more violent breed of monkey.

Placing the film’s magnificent technical achievements aside for a moment, the other key reason for its greatness is because it’s plainly and simply hilariously funny. Oram’s own thousand-yard deadpan is chilling and amusing in equal measure, but there’s also very game supporting turns from Toyah Willcox, Julian Barratt (who spends the entire film clutching a length of Battenburg) and Julian Rhind-Tutt. I’ve never laughed so hard at the tragicomedy of three people having a quiet kick-about on an empty field while it’s raining.

The climactic achievement of Aaaaaaaah! – its miraculous coup de grace – is that it eventually reveals itself as a film about the shattering experience of losing a loved one or being displaced and ostracised because you don’t quite have the moxie to retain the territory you’ve laboured to carve out for yourself. The film explores the difference between men and women, with female characters confined to kitchens and bedrooms, the male characters naturally falling into the roles of default protectors and breadwinners. Oram knows how to hold a shot long enough to make it evolve into something more than it initially appears, drawing our the happy tragedy of domestic working class life from the blissful comedy that comes from dangling your testicles on the forehead of an enemy.

What the hell is this?

This film is so joyous it makes you want to pour an entire bottle of vodka on to your crotch.