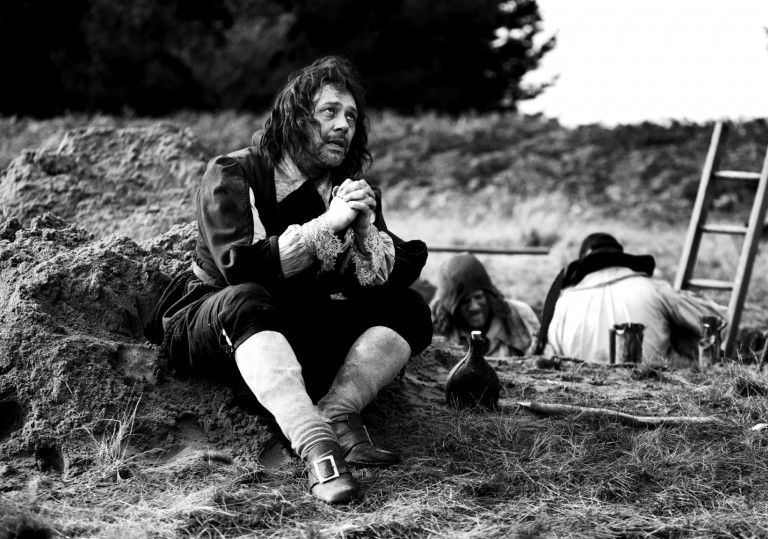 We love Ben Wheatley and hope he makes films forever.

Like being punched in the face by your best friend for no reason.

Ben Wheatley’s Kill List was a glorious, machine-tooled runic shocker, though its giddy, gaudy thrills were multiplied tenfold by a swelling sense of national pride. At long last, we could waltz from the cinema in the knowledge that here was a British filmmaker who could trade body blows with the best of ’em, up there with Roeg and Boorman in their pomp. And he does so while latching on to and subverting that most staunchly traditional British milieu: glum social realism. Being awesome and flying the flag. Double win. So it is on those terms that we are sad to report that we really, really didn’t get on with Wheatley’s wacky, indulgent latest, A Field In England.

This painfully idiosyncratic monochrome farrago charts all the fun and frolics that can be had in a field. In England. Involving a tearaway faction of treasure-seeking, knob-warted grotesques who have escaped from the cut-and-thrust devastation of the English Civil War (circa 1648), it allows us to observe as they converse and bicker in a flowery old-world vernacular (c/o Amy Jump’s assiduously researched script) and embark on psychotropic dread voyages stimulated by the local flora and fauna. Reece Shearsmith, somehow channelling all of his League Of Gentlemen characters simultaneously (and not in a good way), is caught between a pair of bumbling oafs and Michael Smiley’s rogue sorcerer who has stolen important papers from Shearsmith’s employer.

Not only is A Field In England a film which defies explanation, it wantonly repels it. It’s less a film, it’s a filmed art school stag do. Unlike Kubrick’s 2001: A Space Odyssey which synthesised the experience of an acid trip for the enjoyment of all the family, this is a film which can only be understood and enjoyed while in the heady throes of some toxic freakout. The lengthy scenes in which characters lollop around in their own mind-mangled haze are tedious in the extreme, with Wheatley opting for laboured randomness and naff slo-mo effects over any kind of intricate, clever, relatable system of mania.

The film harks back to such old, weird British historical films as Peter Watkins’ Culloden, Kevin Brownlow’s Winstanley and Michael Reeves’ Witchfinder General, but it reminds more of lamentable nu-garage chalk chronicle Human Traffic. Unlike its hallowed forebears, its postmodern demeanour and theatrical, single-setting mode make it come across like a knowing contemporary tale that’s been arbitrarily set in the past. Whether it’s intended as an homage or update of these films is also difficult to judge.

Props must go to Wheatley for producing something so stubbornly unclassifiable, but there is simply no fun in consuming a film which revels in its own pointlessness. The film clearly has its fans, and any detailed elucidation on its messages and meanings would be cheerfully received. But to anyone who wishes to take this lopsided gambol into England’s damaged heart, we say good luck to you. You’re really, really going to need it.

We love Ben Wheatley and hope he makes films forever.

Like being punched in the face by your best friend for no reason.