In The Nice Guys the Canadian star delivers a consummate comedy performance. 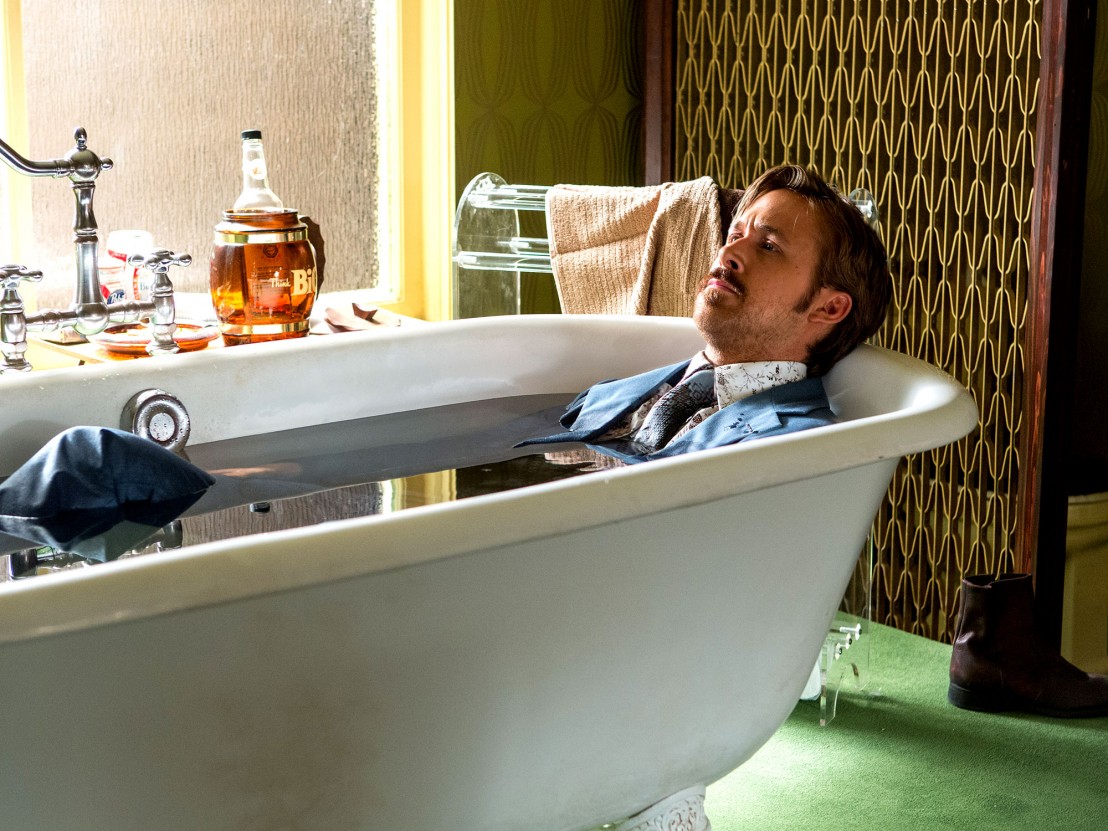 If comedy is about timing, then Ryan Gosling has left it pretty late. After a three-year absence from our screens (‘Ryan Gosling won’t eat his cereal’ doesn’t count), the stoic star of Drive and Only God Forgives has emerged reenergised, sillier and with his sights set on screwball. He’s collaborated with Adam McKay on The Big Short, but it turns out his Jenga economics was merely a set-up for an even bigger payoff: the Goz can tell a joke.

In The Nice Guys, Gosling is the real slapstick deal as Holland March, a bumbling detective of the Shane Black variety – which is to say he’s quick-witted, foul-mouthed and the king of pratfalls. A standout scene sees him rendered speechless upon discovering a corpse, his facial expressions turning positively Looney Tunes. Even simple gestures like swallowing too many mints are a hoot. And he’s dynamite with quips, spitting out punchlines like his mouth is on fire.

Gosling is such a natural clown, you have to remind yourself that this is the same guy who forged a reputation as a brooding hunk. In a 2011 interview Gosling admitted, “Comedies have always been my favourite movies and I always wanted to make them but then I got into drama and never had the chance.” His early credits established a pattern of cold killers (Murder by Numbers, The United States of Leland), psychologically damaged outsiders (The Slaughter Rule, Stay) and even a neo-Nazi (The Believer).

He simply wasn’t required to be funny, except for in Lars and the Real Girl, although when you think about it that really qualifies as a straight-man part. In Half Nelson, when he attempts a knock knock joke, he fumbles the delivery and a kid retorts, “That was horrible.” Later, Blue Valentine’s tears washed away the sugary taste of The Notebook; Drive allowed him to switch gear and ramp up his intense persona; and The Place Beyond the Pines literally tattooed a teardrop on his face. In hindsight, Only God Forgives was the inevitable breaking point.

Overexposed and in danger of burning out, it’s no wonder Gosling decided to take a break from acting. According to the leaked Sony emails, Gosling had lunch with Amy Pascal in 2014 to discuss a comedy makeover, including a possible part in Ghostbusters. A turn in the director’s chair presented him with a new challenge, but Lost River wasn’t the solution he was looking for. With The Nice Guys already lined up, the only thing for it was to take a self-imposed hiatus.

Now, with Black’s film finally arriving in cinemas, Gosling seems genuinely thrilled at the prospect of audiences discovering his lighter side. Between tweeting adoration for Broad City and hosting SNL, it appears he’s intent on rewriting his own internet history and taking ownership of the memes. What’s more, he’s following up The Nice Guys with a Damien Chazelle directed musical, La La Land. For the time being at least, it looks like we can expect to see a lot more comedy gold from Gosling.