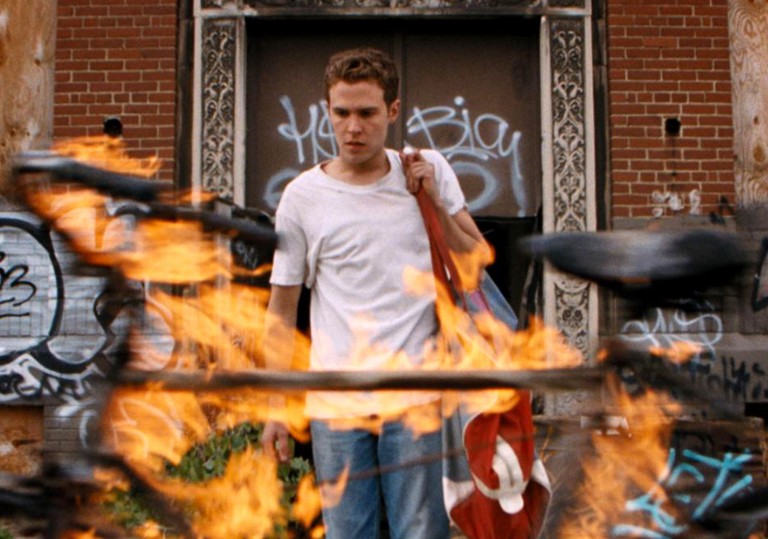 Will Ryan Gosling be as devastating behind the lens as he is in front of it?

In a manner of speaking...

This is the stuff that memes are made off. Composed as a series of increasingly abstract non sequiturs, Ryan Gosling’s directorial debut borrows the dirt-smudged suburban decay of Gummo, the macabre eroticism of Blue Velvet, the karaoke kitsch of Only God Forgives and the fuzzy Cajun colloquialism of Beasts of the Southern Wild and boils them down into a mind-boggling dime-store fantasia.

The dystopian plot loosely concerns a teenager named Bones (Iain De Caestecker), who wears a grubby white tee and permanent confused frown and strips copper from derelict buildings to support his dear ma (Christina Hendricks), all the while attempting to evade Cadillac-cruising gangland deviant, Bully (Matt Smith). Along the way, Bones discovers a hidden reservoir with a row of street lights penetrating the eerily calm surface. His neighbour (Saoirse Ronan) informs him that a once prosperous town now sits at the bottom of it, and so, naturally, he investigates.

Nicolas Winding Refn, Gosling’s regular collaborator and creative kindred spirit, revealed in an interview with LWLies that every film he makes starts with a single image. In the case of Only God Forgives, it was “of a man looking at his hands and very slowly balling them into fists.”

Regardless of how painfully self-aware these scenes are, Lost River is enjoyably wacky in places, and it’s hard not to admire Gosling’s maverick approach to basic narrative structure.

Will Ryan Gosling be as devastating behind the lens as he is in front of it?

In a manner of speaking...