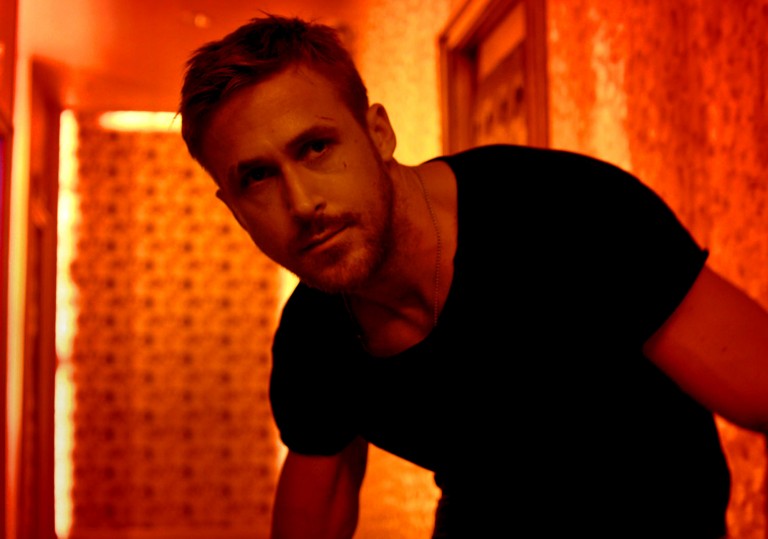 It’s time to meet the devil.

At just 87 minutes, Only God Forgives is one of the leanest cinematic endurance tests you’re ever likely to find.

A psychoanalyst’s wet dream. When can we see it again?

Thud, crack. That’s the sound of knuckle splitting flesh. Specifically Ryan Gosling’s, whose A-list mug is beaten to a swollen, seeping pulp by Vithaya Pansringarm’s metaphorical Angel of Vengeance, Chang. A retired Bangkok cop with a penchant for barbaric justice, Chang’s pledge to cleanse the city’s diseased soul sees him go fist-to-fist with Gosling’s brooding Thai boxing club owner Julian, who, ironically it turns out, isn’t much of a fighter.

Watching intently in the shadows is Julian’s mother, Crystal (a scene-stealing Kristin Scott Thomas). Head of the family dope trafficking business and a fearsome matriarch, Crystal has flown in from America to collect the body of her first-born (and favourite) son, Billy (Tom Burke). Heartbroken and mad on revenge, she arrives expecting her child’s killer to have already been taken care of. But Julian explains that things are more complicated than they appear — Billy died at the hands of the father of the 16-year-old girl he brutally raped and killed, a detail that barely twitches the dial on Crystal’s moral compass.

In the next scene Julian brings his favourite hooker, Mai (Yayaying Rhatha Phongam), to dinner under the pretence that she be introduced as his girlfriend in a feeble attempt to impress his mother. Crystal wastes no time in letting her ill-feelings be known, berating the “cum dumpster” sat beside her before turning her venomous tongue on Julian, citing penis envy as the root of his inadequacy as a son and man. Now is not the time for pleasantries. Eye-for-an-eye retribution is the only thing that will sate her anguish, and once again Julian has proven himself to be a disappointment. “If the tables were turned, your brother would have found your killer and brought me his head on a fucking platter,” she hisses.

As mother-son relationships go, they don’t come more messed up than this one. Despite his ma’s calloused disposition and emotional vacuity, however, Julian is unflinchingly obedient; he keeps her cigarettes lit and kisses her cheek when prompted. When Mai questions the way Crystal treats Julian, he explodes in a fit of indignation. As if their relationship wasn’t complex enough, there’s also a trace of chemical imbalance between Crystal and Julian that occasionally takes a dip into Freudian waters. Julian is chained to his mother’s womb, his actions dictated not just by a desire to placate her but also, on a subconscious level, by the urge to liberate himself from her. It’s this dangerous mixture of love and fear, devotion and contempt, which propels his Dantean descent into an inferno of vice and masochism.

To Julian, Crystal is the Devil and God. She is his church. If self-sacrifice is the ultimate show of faith, then a recurrent fantasy sequence in which Julian submits to being figuratively castrated by a man with a blade (whom we later discover to be Chang) is a gratuitous sign of his enslavement to the maternal phallus. Added to this, it’s possible that the film’s other female characters are in fact ladyboys, including Mai, who at one point is seen masturbating in front of Julian as he sits paralysed in a chair. This teasing ambiguity of the film’s gender representation may explain why Thailand was chosen as the setting.

If Drive was Nicolas Winding Refn’s high-sheen (wheel)spin on werewolf mythology, his ninth directorial feature is a repurposing of another tragic literary monster. Only God Forgives is a dark Oedipal ballet, a lucid fever dream that pulls you in from the opening frame and doesn’t let you go. As in Drive the characters exist within a heightened reality — interiors are perpetually bathed in pools of deep red and blue light; beads of disco-ball light dance and skip off surfaces like drunken spirits; prostitutes wait tables at cheap karaoke clubs, or else adorn plush sofas in neon-lit backrooms like dolls arranged neatly on a dresser, waiting to be played with.

All the while Julian moves tigerishly through this claustrophobic purgatory; composer Cliff Martinez’s delicate cacophony of tribal drums and wind chimes setting a foreboding, rhythmic pace. When the violence comes, it does so in ear-punching thunder claps — fetishised scenes of bodily mutilation are often prolonged, the camera merciless and unblinking, intensifying the sensation of being trapped inside someone else’s nightmare. The sound of Chang’s razor-sharp wakizashi sword cutting through the thick, putrid air adds yet another layer to the film’s visceral tone.

Stylistically it evokes the work of David Lynch and Gaspar Noé — though he’s not officially credited (he is thanked), the Irreversible director’s presence on set surely rubbed off on Refn. As a footnote, it’s intriguing that Only God Forgives is dedicated to Alejandro Jodorowsky. Yet if that is an acknowledgement of further creative emulation, it takes nothing away from what is an unquestionably self-indulgent but engrossing singular vision. This is by some way Refn’s most complete film. It may even be his masterpiece.

It’s time to meet the devil.

At just 87 minutes, Only God Forgives is one of the leanest cinematic endurance tests you’re ever likely to find.

A psychoanalyst’s wet dream. When can we see it again?