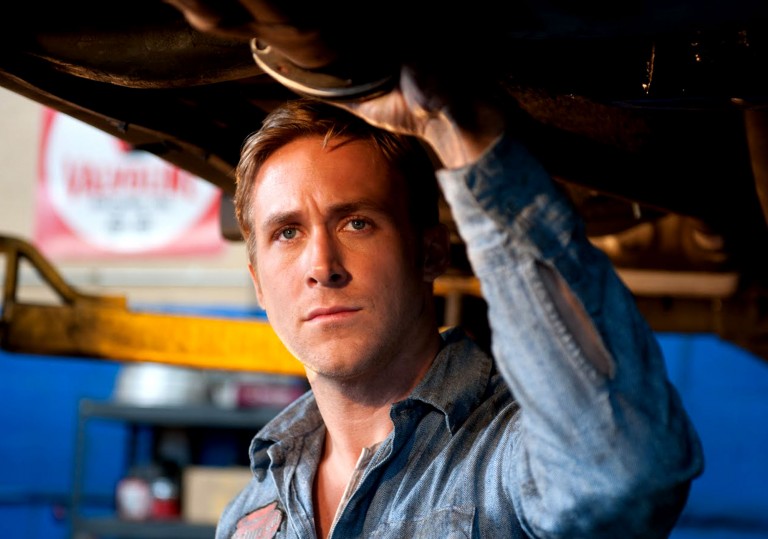 Released out of nowhere to huge acclaim at the 2011 Cannes Film Festival, where Nicolas Winding Refn took the award for Best Director.

By no means perfect, although it’s hard to process the flaws while your insides are singing and you can’t catch your breath.

Overlaid against the neon backdrop of LA, College and Electric Youth’s shimmering synth conjures an image of ‘a real human being – and a real hero.’ But Driver (Ryan Gosling) isn’t either of those things. His transformation from antihero to avenging angel powers a film of stomach-flipping twists and handbrake 180s that escalates – gradually, inexorably, terribly – from quiet romance to ecstatic violence. And all you can do is hang on for the ride.

Based on the 2005 novel by Jim Sallis, Drive is a classic slice of pulp noir reimagined by Danish director Nicolas Winding Refn as a stunningly violent fairy tale. Driver is a wheelman – the go-to getaway guy for the city’s classier criminals. For the right price, you get five minutes: anything happens in that five minutes and he’s yours; anything happens a minute either side and he’s dust.

Refn sketches these details in an opening salvo that sees Driver waiting outside the site of an armed robbery before escaping from under the noses of the police. Shot almost exclusively from the interior of the vehicle (pulse-like soundtrack; engine rattle and clatter), it establishes Driver as a man for whom action is character. Impassive and taciturn, his most affecting quality is stillness. But like the cars prepared for him by friend and garage-owner Shannon (Bryan Cranston), Driver’s unremarkable façade deliberately masks the fearsome capability beneath.

Though Refn made his name as Denmark’s answer to Martin Scorsese with thug life drama Pusher, here he’s channelling the forensic cool of Michael Mann. Thief is the obvious reference point (loner protagonist is driven to an act of terrible revenge), but there’s a wider sense in which Refn has replicated Mann’s ability to capture the nuances of LA itself.

Though a potent location in crime fiction, as a cinematic icon, LA has found itself overshadowed by East Coast rival New York. Drive goes some way to rectifying that, as Refn captures the squalid beauty of the city in stunningly crisp digital images.

The City of Angels has never looked so ethereal, whether viewed at night from high above the skyscrapers, or down below, eyes pressed up hard against the street. Because for all its otherworldliness, neither has LA looked so real as it does in the unforgiving sunlight – so inhabited, so rich, so full of drama and stories.

Driver’s story is buried somewhere in a past we know nothing about. Where Sallis was merely circumspect about the details of his life, Refn (and scriptwriter Hossein Amini) jettisons them completely. Driver is a man without a past – an archetype (a knight on a white Dodge Charger) who exists only in this time and this place.

And Gosling – ever the chameleon, ever the reluctant Hollywood player – invests him with just enough character to hint at those hidden layers. Dressed in denim and driving gloves, he evokes a young John Wayne, but moves with a dancer’s swagger, as if to a rhythm only he can hear.

There was a period when Gosling’s intransigence began to look like a lack of confidence. As his peers scooped up roles in comic-book blockbusters or banked franchise pay-cheques, he worked intermittently, in resolutely small films, refusing to be tempted by – or test himself in – the big studio show. But if Half Nelson was the film that made his career, Drive is going to make Gosling a star.

It’s a performance that relies on a physicality and presence he’s only hinted at before. Driver’s few spoken lines are dragged reluctantly from his mouth, and emerge at a surprisingly feminine pitch. But if that voice and those Droopy eyes suggest some inner vulnerability, it’s a fantasy soon put to rest.

And yet the point at which Refn stamps on the accelerator is also when Drive begins to lose traction. When Driver falls for his neighbour, Irene (Carey Mulligan), he dares to imagine a different kind of life, until Irene’s husband, Standard (Oscar Isaac), is released from prison. Up to his neck in bad debts, a serious beating in front of his young son (where, in the peculiarly gruesome depiction of Standard’s injuries, we receive our first hint that Drive is up to something) convinces Standard to ask Driver for help, which is how he finds himself acting as wheelman on a classic heist-gone-wrong.

The aftermath of this event pulls Driver into the world of low-rent gangster and one-time movie producer Bernie, (Albert Brooks) along with his partner Nino (Ron Perlman), who is himself into some serious shit with the East Coast mob. When Bernie brings the fight to Driver’s door, Driver responds with a double-barrelled blast of violence, and Drive suddenly shifts from slow-burner into high-octane revenge thriller.

That shift is encapsulated in the film’s most memorable scene – a stunning collision of eroticism and brutality that only a master maniac like Refn could pull off. In an elevator, confronted by one of Nino’s henchmen and with Irene about to leave him forever, Driver kisses her before turning on the other man. It’s a moment of exquisite and contradictory emotions – love, atonement, vengeance and rage – coalescing and combusting with startling ferocity. It is Driver’s last chance at redemption before both he and the film reveal their true nature – a nature that even Gaspar Noé would find hard to stomach.

But as Driver passes through the final stage of his transformation – from avenging angel to murderous spectre – he passes the point at which the audience might care to sit shotgun. And as you’re released from the grip of Gosling’s seductive charisma, nagging flaws suddenly become apparent.

As a pair, Gosling and Mulligan are too callow to suggest that years of hard living have taken their toll. Mulligan’s perfect, unblemished skin exudes the healthy glow of movie stardom, not the ravaged stresses of a single mother. And as all she’s asked to do is smile sweetly, keep her mouth closed and look soulful, she has little opportunity to bring Irene to life.

As Driver’s actions turn from vengeance to psychosis to insanity (sane people don’t turn up to work in a blood-stained jacket to collect a prop for the murder they’re planning), it’s very difficult to maintain any empathy. The fairy tale context may explain the film, but it doesn’t make it any easier to watch.

Nor is this a question of squeamishness. The fact that the violence is filmed in unflinching and shocking detail (with knives, hammers and cut-throat razors all playing their part) is to the film’s credit – and entirely in keeping with its pulp roots. But once Drive reaches that fever-pitch plateau, it has nowhere else to go. Refn, for all the extravagant machismo and technical ingenuity of the film’s direction, shoots himself into a corner.

But even then, that virtuosity, allied to Cliff Martinez’s glittering score, is the fuel that powers Drive beyond the head and straight into the gut. This is the singular vision of a director who proves himself an artisan of cinematic violence, one whose commitment to that vision will brook neither argument nor dissent. And at the last, the denouement returns to the film a serene sense of beauty paid for by the sacrifice that Driver makes in the waning sunlight and waxing shadows of LA.

Every good fairy tale involves a quest for something. Driver’s is for purity and grace. Refn’s is for redemption in the Hollywood system that nearly destroyed him. Both of them have found what they’re looking for, even if it comes with strings attached. For audiences looking for an ice-cool, uncompromising and gut-wrenching pulp thriller, the search ends here.

Released out of nowhere to huge acclaim at the 2011 Cannes Film Festival, where Nicolas Winding Refn took the award for Best Director.

By no means perfect, although it’s hard to process the flaws while your insides are singing and you can’t catch your breath.