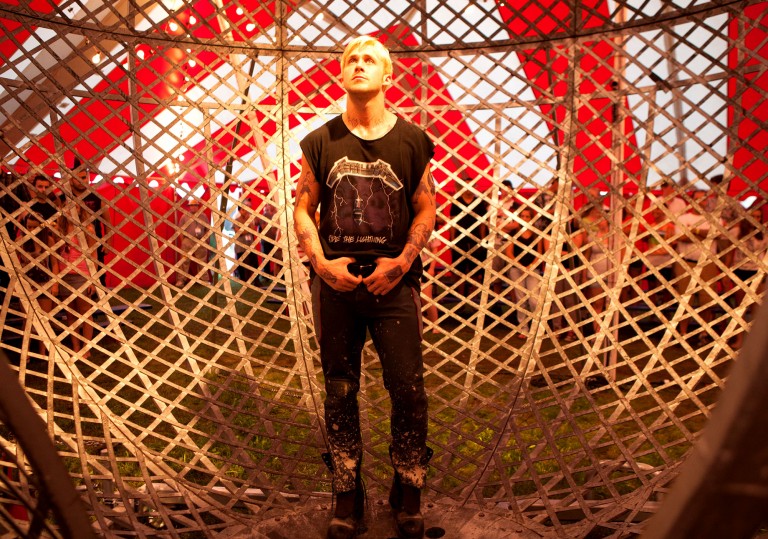 The Blue Valentine writer/director is back, and he’s brought a familiar face along for the ride.

After two powerful but flawed features it’ll be interesting to see what Cianfrance does next.

Coasting into view like Drive‘s sensitive, understated cousin, The Place Beyond The Pines sees Ryan Gosling tear up familiar terrain as a part-time stunt rider who turns to crime to protect a damsel in distress (Eva Mendes). This time, however, his natural habitat is not the asphalt dystopia of Los Angeles but idyllic upstate New York – specifically the city of Schenectady, named after a Mohawk word that loosely translates as ‘place beyond the pine plains’.

In a fluid opening tracking shot we’re guided through a busy carnival late at night by a mysterious male figure. The name Handsome Luke blares out over a tannoy as he strides into a packed marquee, the din of the crowd yielding to the synchronised squeal of motorcycle engines as he and two other bikers ceremoniously enter a ‘globe of death’. It’s a rousing introduction to Gosling’s enigmatic anti-hero and a brilliant piece of camerawork that’s mirrored to poignant effect in the film’s cathartic third act.

Luke rides like lightning and crashes like thunder, his reckless abandon dramatically altering not just the course of his life but the lives of those around him. With his oil-smudged apparel, bleached mop and maverick sprinkles of prison ink, Luke is the bad-boy antithesis of Pines’ other chief protagonist, clean-cut rookie cop Avery Cross (Bradley Cooper), whose entrance marks an abrupt shift in tone that will divide audiences.

Gosling’s previous film with writer/director Derek Cianfrance, coupled with the aforementioned echoes of Drive, places him front and centre here. Despite only turning up at halftime, however, it’s Cooper who steals the show, though in fairness he’s given a meatier role to play with. Arguably topping his performance in David O Russell’s Silver Linings Playbook, it’s no wonder Cooper is fast becoming recognised as one of Hollywood’s brightest talents.

Where Cianfrance’s emotionally raw 2010 directorial debut Blue Valentine offered an intimate and uncompromisingly dim view on the natural life cycle of love, Pines is far grander in scope. Spanning several decades and multiple intersecting lives, it’s at once an ambitious, intelligent and occasionally brave film that shows how we are all connected and how even the most negative action can have a positive reaction. It’s a captivating message for the most part, but you can’t help feel there’s a leaner, more engaging film here.

Even if the end product doesn’t quite come together, though, you have to admire Cianfrance for attempting to weave together such an intricate and dense character study.

The Blue Valentine writer/director is back, and he’s brought a familiar face along for the ride.

After two powerful but flawed features it’ll be interesting to see what Cianfrance does next.