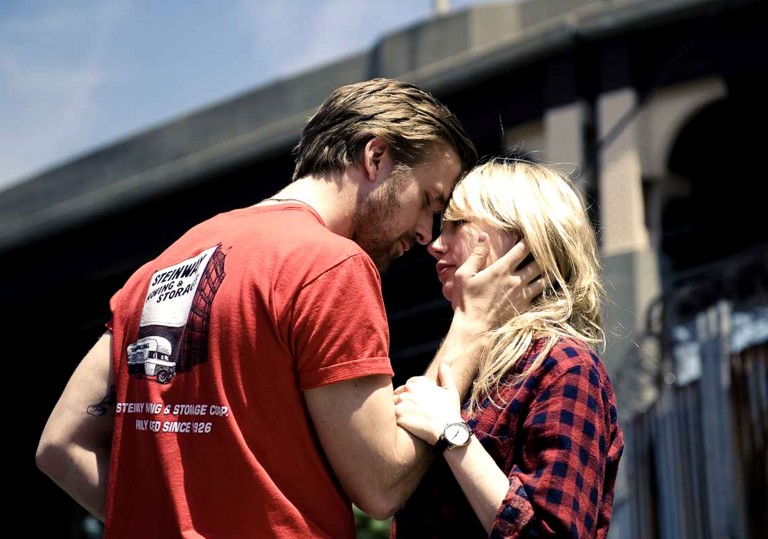 Screened at Cannes last May where it was appreciated rather than adored.

Its rawness and honesty may not be everyone’s cup of tea, but Blue Valentine stands as a necessary corrective to the myth of cinematic love.

Perhaps not a film for a first date, but this is powerful stuff.

A heartbreaking and unsentimental relationship drama, Blue Valentine annihilates the myth of cinematic love. In depicting the crumbling marriage of Dean (Ryan Gosling) and Cindy (Michelle Williams), director Derek Cianfrance flatly rejects the redemptive qualities of romance, and delves unsparingly into the reality of two lives that are slowly and painfully ossifying.

But that isn’t the whole story, because this painful break-up is contrasted in beautifully assembled cross-cuts with the early days of the relationship. Here, the charismatic Dean seduces Cindy while working as a removal man and dreaming of bigger things. Gosling and Williams bring the screen to life, the connection between them intimate and tender but electric enough that you can almost hear the crackle.

In another film, the trials they face as a couple would have clear answers and a simple resolution. But in Blue Valentine, Cindy’s discovery that she’s pregnant by a former boyfriend is the fateful moment that both brings them together and ultimately dooms them. From this point on, the everyday disappointments of life will provide a fertile breeding ground for bitterness and resentment.

It’s a rare balancing act that Cianfrance has pulled off, with moments of utter joy brutally offset by a vivid sense of anger and betrayal. The scene in which Dean and Cindy go to a cheap motel room to reignite their old passion is an almost unbearable portrayal of emotional desperation.

Physically, both Gosling and Williams’ subtle signs of ageing underline that inner transformation, as Dean’s hairline recedes and Cindy’s eyes lose the spark of hope that lit up her youth. Both actors are superb – fearsomely committed but restrained enough to ensure that the film doesn’t descend into a noisy riot.

Yes, there are fiery moments of passion and drama, but it’s Blue Valentine’s quiet, keening tragedy that knocks you down and keeps you floored.

Screened at Cannes last May where it was appreciated rather than adored.

Its rawness and honesty may not be everyone’s cup of tea, but Blue Valentine stands as a necessary corrective to the myth of cinematic love.

Perhaps not a film for a first date, but this is powerful stuff.