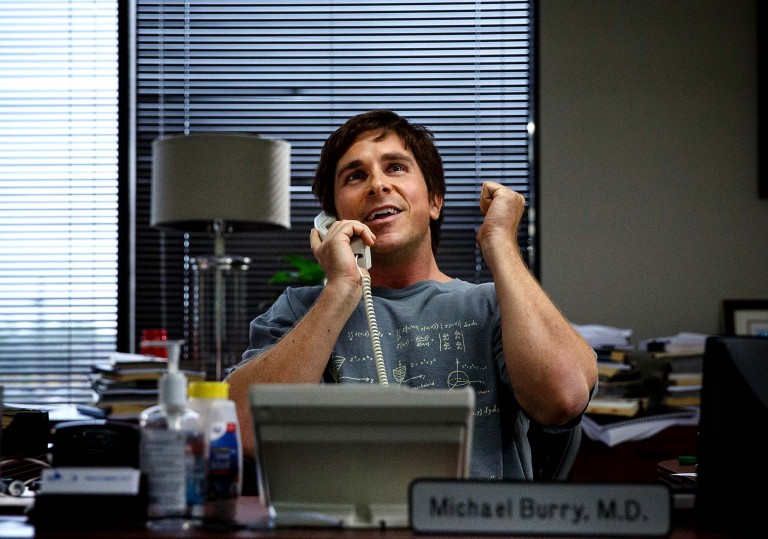 It seems that Adam McKay is Oscar’s new bessie mate.

Lots of pleasant bluster, but spreads itself a little too thin.

Though it is nice to see a mainstream drama that’s at least ambitious and (mildly) ambiguous in its right-on aims.

Is it possible to like people who make money as a direct result of unseen misery? It’s a question posed but not quite answered in Adam McKay’s The Big Short, which is based on the Michael Lewis non-fiction bestseller of the same name. Like most if not all mainstream movies, this one is in desperate want of a hero, though it ends up doubling down on the happy realisation that some good, sympathetic and discerning souls just love to get rich. But that if you happen to have lots of money, the maths would suggest that someone elsewhere is getting royally shafted.

By self-consciously doing its business in moral grey areas and slamming down fourth-wall breaking nods and winks like soiled twenties, the film at least keeps you guessing as to whether McKay and co-screenwriter Charles Randolph will have the brass cajones to reprimand their four horsemen of the financial apocalypse for underhand trading tactics.

Yet the best they can muster is lenient self-hatred, as their characters constantly acknowledge that what they’re doing is awful and wrong, but that – hey! – if they didn’t do it, some real monster would. What’s more, it’s a stealthy method to kick against those power-suited pricks down on Wall Street who share between them not a shred of human empathy.

Christian Bale plays Michael Burry, a heavy-metal fixated, idiot savant shut-in who takes the time to analyse the dense spreadsheets of mortgage repayment data that no other mortal would give a second thought to (they’re probably in a strip club or something?). Working as the golden goose at an investment firm, he takes a gigantic wedge of capital and places a longshot bet on the housing market collapsing in the second quarter of 2007. Not helped by his antisocial tendencies and a love of wearing three quarter length cargo pants to the office, his colleagues and boss think he’s gone cuckoo, despite his protestations that he knows for certain that things will get loco.

Bale’s character then falls into the backdrop as the focus turns to Steve Carell’s conscientious straight-talker Mark Baum – by far the film’s most interesting character. It’s within him that the conflict caused by of his nefarious actions hits hardest, not least because he’s still wallowing in a period of grief from having lost a brother to suicide. His inability to spot his brother’s pain in enough time to stop him from leaping from a building is the film’s most moving and clever articulation of the idea that, in the end, we can only feel sorry for people whose lives are beset with suffering which we may have indirectly caused. Carell’s attempt at cantankerous shit-kicker is laced with just the right amount of hair-ruffling goof to allow him to walk off with the film – it’s a far more carefully shaded and humane turn than his lauded role as Count Orlok in Foxcatcher.

Narrating the highjinx is Ryan Gosling’s narcissistic dudebro, Jared Vennett, who’s tossed into the mix as a device to keep audiences on top of all the banking doublespeak. Comic asides are used in which various real-life celebrities explain complex mortgage ancillaries – though once the novelty wears off, they come over as somewhat condescending. Even the simple explanations don’t really make any sense, seemingly slotted in to give the impression that while you may not know what the hell is going on, at least the filmmakers do. Brad Pitt wearing a wispy CND beard pops up in the story’s outer orbit, his character, like Carell’s Baum, out to expose the endemic corruption of the banking sector. And get stinking rich in the process.

It’s strange how the Carell, Bale and Pitt storylines never really intersect. Maybe that’s a good thing, suggestive that these various small factions were able to individually pounce on this opportunity and confront it in different ways. However, it also means that you have interesting stories (Carell’s) and not-so interesting stories (the other two) competing for supremacy. In it’s defence, though, it’s more like a fictional version of an Alex Gibney film than it is a fictional version of a Michael Moore film. There’s at least a pretense of moral objectivity here. The film toys discreetly with its documentary roots by having cinematographer Barry Ackroyd lend the patina of crash-zoom verité to proceedings which have been unashamedly fictionalised, and the decision to work in this fashion is one of the film’s more fascinating and radical decisions.

One problem with the film is that in attempting to usher in a short-hand sense of the world that’s being decimated at the hands of these fiscals weasels, we get snappy Twitpic-style image montages of “poverty” and trash culture of the type in which McKay may have located humour in a previous film (Anchorman, Step Brothers, The Other Guys). It’s like this new embrace of serious filmmaking and fast-track entry to the Awards dinner circuit has meant that all this stuff is fair game now, and that by having red-faced men shaking their fists at the sky at the impending downfall while making a tidy fortune in the process is enough to make us understand the implications of the evil being witnessed.

It seems that Adam McKay is Oscar’s new bessie mate.

Lots of pleasant bluster, but spreads itself a little too thin.

Though it is nice to see a mainstream drama that’s at least ambitious and (mildly) ambiguous in its right-on aims.