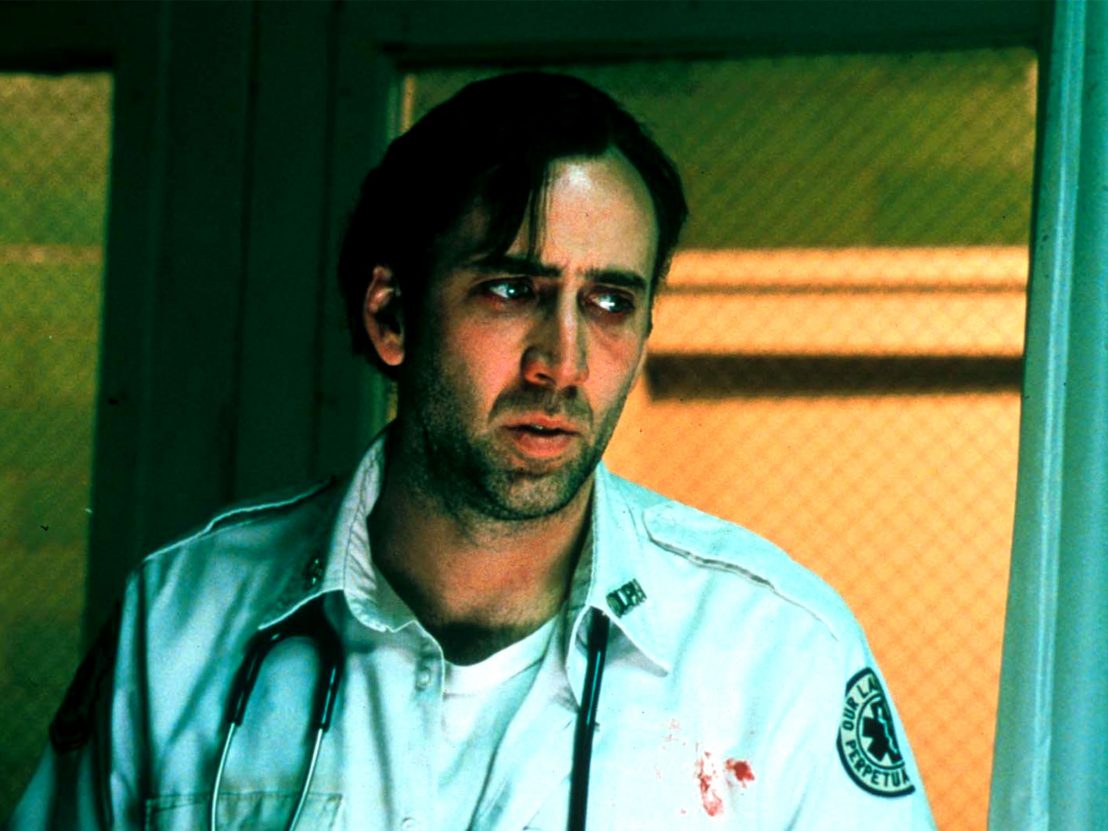 Released in 1999 to generally positive reviews but a poor box office, Bringing Out the Dead remains one of Martin Scorsese’s most overlooked films. His fourth collaboration with screenwriter Paul Schrader (here adapting a novel by Joe Connelly) acts as a fusion of the pair’s earlier efforts Taxi Driver and The Last Temptation of Christ. It is a frequently horrific odyssey through nocturnal New York, tinged with a desperate grasp at grace from a man teetering on the line between life and whatever lies beyond.

Instead of Christ, though, Bringing Out the Dead’s hero is Frank Pierce, a graveyard shift paramedic played by Nicolas Cage, an actor who probably qualifies as a deity to certain subsets of online fandom. The film follows Frank over three consecutive nights, at a point where he’s not managed to save any dying patients for months. During these hectic nights, he befriends the daughter (Patricia Arquette) of a heart attack victim he’s brought in and works in a two-man ambulance team with a slew of different partners, each as unhinged as him but in their own ways.

The partners are played by John Goodman, Ving Rhames and Tom Sizemore respectively, with the latter two giving career-best performances. While the entire cast is excellent, Cage – as is so often the case – is the real star of the show. Sadly, and for whatever reason, Bringing Out the Dead remains the sole joint offering between Cage and Scorsese, and the last between Scorsese and Schrader (although Cage and Schrader did reunite on 2014’s Dying of the Light and 2016’s Dog Eat Dog).

Cage is the ideal Scorsese protagonist because he looks so thoroughly chewed up and spat out – both by the urban horrors of his surroundings and his personal demons. And with the flashes of magical realism Scorsese adds to the mix, those two forces become one at many points, as Frank is haunted by manifestations of people he was unable to save, as well as the apparent ability to hear the thoughts of patients as they float between life and death.

Like Taxi Driver, Bringing Out the Dead is peppered with narration from its damaged protagonist, and it’s through this that Frank summarises his lot in life early on in the film. “Saving someone’s life is like falling in love. The best drug in the world.”

Stuck in a perpetual bone-tired state, Frank seeks an escape from his lifestyle by a firing that never comes. Yet, despite all his protests and rage against his profession, patients and his aforementioned demons (there’s one particular young woman he failed to save who haunts him the most), there’s the pervading sense that he’s hopelessly addicted to this way of living. The work is depressing as hell, but he simply can’t cope without the adrenalin rush that comes from saving lives. It’s that high – or at least the chasing of it – that keeps him alive, the bitter irony being that this regimen is slowly killing him at the same time.

Key to the film’s success is the way it veers from a brand of gallows humour into total havoc, often within the same scene. Accordingly, Cage is the perfect anchor for a hyper-stylised, constantly gear-shifting tale. More recently his idiosyncratic acting style has seen Cage spawn more memes than earn plaudits, but this is testament to his willingness to go anywhere for a role, no matter how disreputable the project (and there has certainly been plenty of those over the last decade or so). Yet it’s a reputation he seems to have embraced, even going as far as to make a lengthy surprise appearance at a festival dedicated to his own films.

Focusing on Cage’s various physical tics and maximalist tendencies solely as a source of comedy does a disservice to the man’s talent. Given the right project, he can be a performer of immense emotional availability, a quality present from his very first lead role in the 1983 teen romance Valley Girl. The nature of Bringing Out the Dead’s off-kilter narrative allows Cage to exaggerate certain aspects of his screen persona, but he also imbues Frank with a palpable tenderness, even when he’s railing against the cyclical situations he finds himself in. The film simply wouldn’t work without the earnestness Cage brings to the part. Frank, much like the film itself, invites us to see past his tough exterior at the more hopeful qualities hidden within.