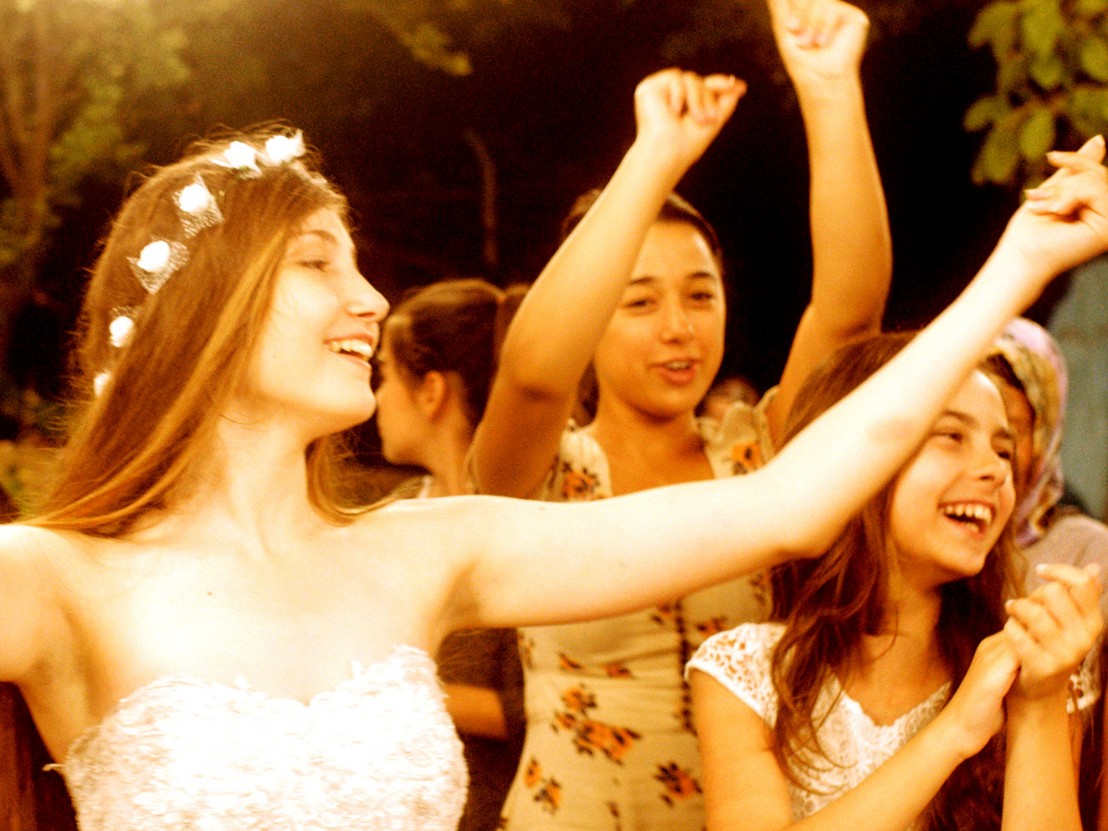 It’s no surprise to learn of Mustang’s conception as the brainchild of the only female directors at Cannes Film Festivals Atelier in 2011. What French writer/director Alice Wintour and Turkish director Deniz Gamze Erguven offer is not only a stark and refreshing portrait of the lives of five Black Sea sisters but also an important commentary on sisterhood and female solidarity in Turkish society.

So the story goes: fives orphaned sisters in a small Turkish village start goofing around with some male classmates on the last day of school and get caught. In fear of the girls’ reputations being ruined their guardians put the house on lockdown, remove all objects of corruption and quickly attempt to marry each of the girls to a local boy before the summer is over.

The initial premise and dreamy summer shots of adolescent bodies positions Mustang as a Turkish remake of Sofia Coppola’s The Virgin Suicides – there are even shots of the girls being paraded in homemade gowns in which they could be mistaken for the Lisbon sisters. But what is striking here in contrast to the Lisbons (and indeed other western tales of sisters in times of hardship) is the way in which this female bond runs through the film in resistance to the girls’ fates. What we are left with is a haunting story of kinship that represents the changing face of modern Turkey and female empowerment.

The film unfolds as an intimate look at the each sister’s own path to womanhood, their fierce bond with one another and their agency (or lack thereof) in a society as it turns away from secularism and moves toward the traditional. A deep current of political tension runs through the film. It is no coincidence that when removing the ‘instruments of corruption’ from the girls’ rooms the grandmother finds and quickly disposes of a t-shirt bearing the slogan #direngezi – a popular tag from the 2013 Gezi Park protests in Istanbul.

Through each sister (and to some extent their grandmother) we see some of the larger issues arise and the backstage areas of women’s lives in Turkey. With the house on lockdown and resembling more a ‘wife factory’ than a family home, we are encouraged to explore the private sphere which the girls inhabit while considering how these gendered spaces are navigated and sometimes manipulated. There is a beautiful scene in which an older village member teaches one of the girls to make chewing gum during a cooking lesson. Much of the film follows its narrator and youngest sister Lale, looking for these moments of freedom. Scenes are laced with this battle for liberation, from scoping out the house for escape routes to the girls using their mattress as an imaginary swimming pool or sunbathing behind iron bars.

These rare scenes where the sisters are left to be free in the absence of a male figure, and the imposition of such patriarchy within this space, pose curious questions relating to how the women of Turkey form the working backbone of the country’s society. This is brilliantly and heartbreakingly portrayed in a scene in which the girls are able to sneak into a football match while their aunts cover up their disappearance. It’s a moment as hilarious as it is terrifying in its desperation.

Art has always reflected reality in Turkish cinema and its film industry is no stranger to commenting on social or political issues affecting the country and its people. Ever since the dark days of censorship in the ’80s, directors such as Nuri Bilge Ceylan have endeavoured to explore these changes in relation to both individual and national identity. In Mustang, the girls collectively represent Turkish womanhood. Erguven’s frank look at issues such as child marriage and virginity testing through the wider lens of female sexuality marks an important step forward in Turkish cinema.

Mustang is in cinemas and on demand from 13 May.