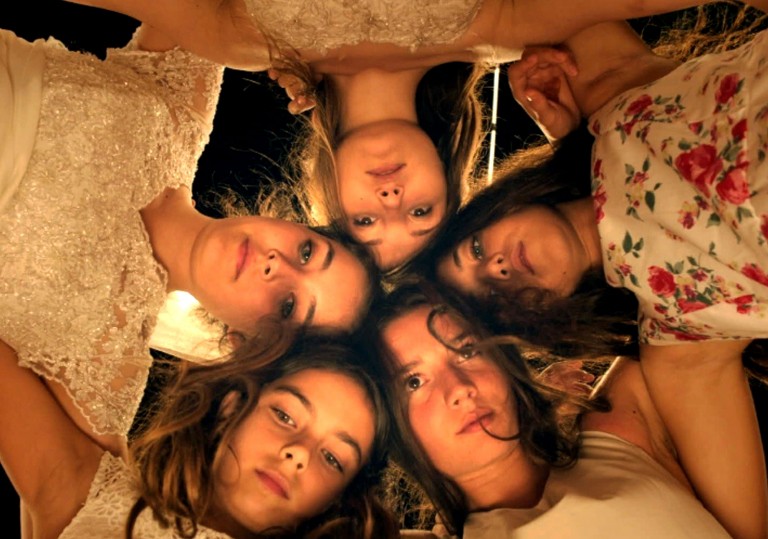 Massive buzz, including a tweet from superfan Andie MacDowell.

Before Mustang received an Academy Award nomination, when all anyone had to go on was an opaque title, the film was being sold as, ‘a Turkish Virgin Suicides.’ The logline is irresistible, for there are numerous surface similarities to Sofia Coppola’s 1999 debut feature.

Both pivot around five sisters, all with long hair that glints in the sun. They are so close-knit that they appear as a five-headed mass of limbs and laughter. The darkness that slowly encroaches on youthful freedom is also the same, taking the form of a fear of female sexuality. The scene in which the girls’ weary grandmother locks up all their colourful gadgets and playthings is a direct homage.

Like the Lisbon sisters before them, these five surname-less orphans look like miniature princesses. They radiate fairy tale femininity, looking picturesque even as their dialogue grounds them in irreverent sibling banter. Mustang steps out from any comparative shadow by virtue of the gripping specificity of the narrative. The tools with which a fearsome patriarch oppresses and imprisons the girls are rooted in the formative experiences of director, Deniz Gamze Ergüven. While the shape and pitch of the story could be the shape and pitch of any story where men trample over women, Mustang is rooted in rural Turkey, here represented as a confusingly idyllic village next to the Black Sea.

The girls enjoy an opening that is free from the strictures of gender norms in this time and place, but, through the shocked reactions of family and neighbours alike, Ergüven makes it clear that it’s dangerous to want a full and rich life when you happen to have been born female. What makes Mustang so affecting is the vivacity with which the girls are shown enjoying their freedom, despite the threatening spectre of the powers-that-be. A water fight in the sea and an illicit trip to a football match are soaked in joy. The giddy abandon of youthful pleasures are writ large across blissed-out faces and fast mouths. The story moves at speed, with Ergüven constantly resisting the temptation to pause and wring sentiment from a dramatic development. One moment the sisters are as free as wild horses, the next the bone-dry narration by the youngest, Lale (Günes Sensoy), says, “The house became a wife factory that we never got out of.”

The script is a masterclass in lean storytelling. Sorrow is expressed sparingly, and often dashed with a stoic sense of humour. Punchlines are usually an image, enabling the film to keep up the combined momentum of potently pleasurable visuals atop smooth narrative wheels. The sisters are photographed with reverence for their lithe beauty. Their physical similarities and the ease with which they drape themselves upon each other make it hard to figure out exactly who is who.

As you do figure it out, it’s because their numbers are dwindling. When this happens it becomes clear that this is Lale’s story, which also scans as the story of all women who – at least temporarily – manage to transcend abuse. Warren Ellis’ melancholic score, which works away in the background, has a chance to exert all its muscularity in a travel sequence, which is the film’s sole moment of repose. It is a moment in which the losses and injustices of these girl children finally exerts their heavy weight.

Massive buzz, including a tweet from superfan Andie MacDowell.