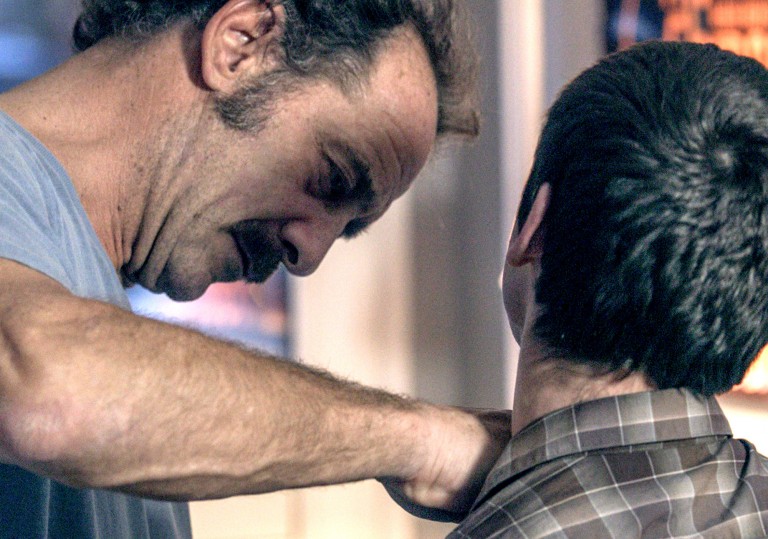 This is the film that won the perennially undervalued Lindon the Best Actor award at Cannes.

An absorbing and enraging look at a broken system.

Brizé and Lindon measure up.

If the art of listening is the key to good acting, then Vincent Lindon’s performance in The Measure of a Man is a masterclass. He plays Thierry Taugourdeau, a longtime factory worker now seeking employment having been laid off in a round of redundancies some 20 months prior. For much of Stéphane Brizé’s quietly engrossing character study, all he can do is sit and listen as a variety of people explain why his chances of finding a job are so limited.

In the opening scene, we find him in an employment centre trying in vain to understand why the course he spent four months training on is useless because nobody informed him of an additional qualification that was required to land a job. All Thierry wants is to go back to work and provide for his family, but he’s trapped in a system that keeps shifting the goalposts.

This is the third film in a row that Brizé and Lindon have made together, but it’s the first time the director has relied so heavily on his leading man. Everyone else who appears in the film is a non-professional actor making their screen debut. Many of them suffered the same economic setbacks as the characters they are playing, and Brizé’s quest for realism produces a number of scenes that are painful in their authenticity.

Thierry and his wife try to sell their mobile home but the deal collapses into a squabble over the price; a bank manager proposes taking out life insurance, not too subtly suggesting that he may be worth more to his family dead than alive; an interview training group provides feedback on Thierry’s presentation, picking apart every aspect of his demeanour. Lindon’s nuanced and deeply expressive performance shows us how each successive indignity chips away at his character’s soul.

Brizé shifts the focus in the film’s final third. Thierry finally succeeds in getting a job, working as a supermarket security guard, but this development only introduces a whole new set of complex moral issues into the film. He is tasked with observing and apprehending people who are often stealing solely because they can’t make ends meet. There’s something deeply unnerving about the way Thierry’s colleague shows off the inescapable range of his multiple security cameras, and Lindon’s work becomes even more impressive in this climactic stretch, as he charts his growing discomfort in this authoritarian role almost entirely through his face and body language.

The Measure of a Man depicts the ways in which capitalism turns the working class stooges against one another and makes it feel like a spiritual sibling to the Dardenne brothers’ Two Days, One Night. He frames his long takes in medium shots that allow Lindon and his co-stars to play out scenes in an unhurried and naturalistic way, making every moment feel alive and immediate, with a handful of domestic scenes between Thierry and his wife adding vital warmth to the picture.

Aside from those brief interludes, this is a chilling portrait of the world that we now live in. Brizé gives us the measure of one man, but really Thierry is representing countless men and women; ordinary people who have been thrown on the scrapheap by a society that has decided it simply has no use for them.

This is the film that won the perennially undervalued Lindon the Best Actor award at Cannes.

An absorbing and enraging look at a broken system.

Brizé and Lindon measure up.