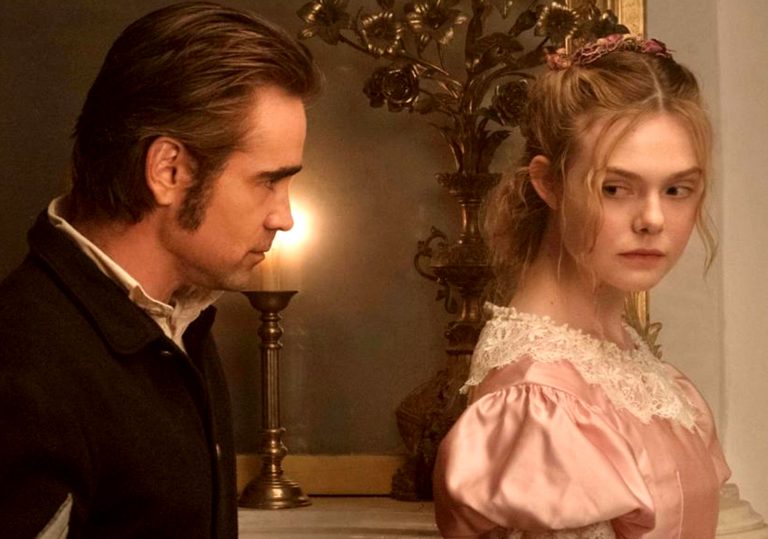 The release of a new Sofia Coppola film should mean a public holiday.

Another pristine bauble of melancholy from a remarkable director.

A sense of yearning runs through Sofia Coppola’s The Beguiled. This yearning is buttoned up in high-necked dresses and sublimated beneath feminine good manners. What gives it away are hungry eyes, magnetised bodies and the measures eventually taken to stem the powers of its hunky source. The implication is, left to run its course, this yearning could destroy the world.

The world in question is Miss Martha Farnsworth’s School for Girls. We’re in the sun-dappled state of Virginia. It’s 1864, three years into the American Civil War. Behind locked gates, in a beautiful, white-pillared building, five schoolgirls – including seductress-in-the-making Alicia (Elle Fanning) – are taught French, sewing, music and other ladylike pursuits by exacting headmistress, Martha (Nicole Kidman) and her assistant, Edwina (Kirsten Dunst).

Save for passing Confederate patrols, the school is a bubble from the patriarchal outside world. Its residents are trapped on a treadmill of lessons, chores and the maintenance of pre-war disciplines. Into this microcosm of feminine civilisations comes enemy soldier, Corporal John McBurney (Colin Farrell). Brought in after the youngest girl, Emily (Emma Howard), finds him wounded in the woods, the Corporal initially thinks he’s been delivered to the promised land. Especially after Martha violates the protocol of reporting his existence to the Confederates, claiming the “good, Christian” thing would be to let him recover first. 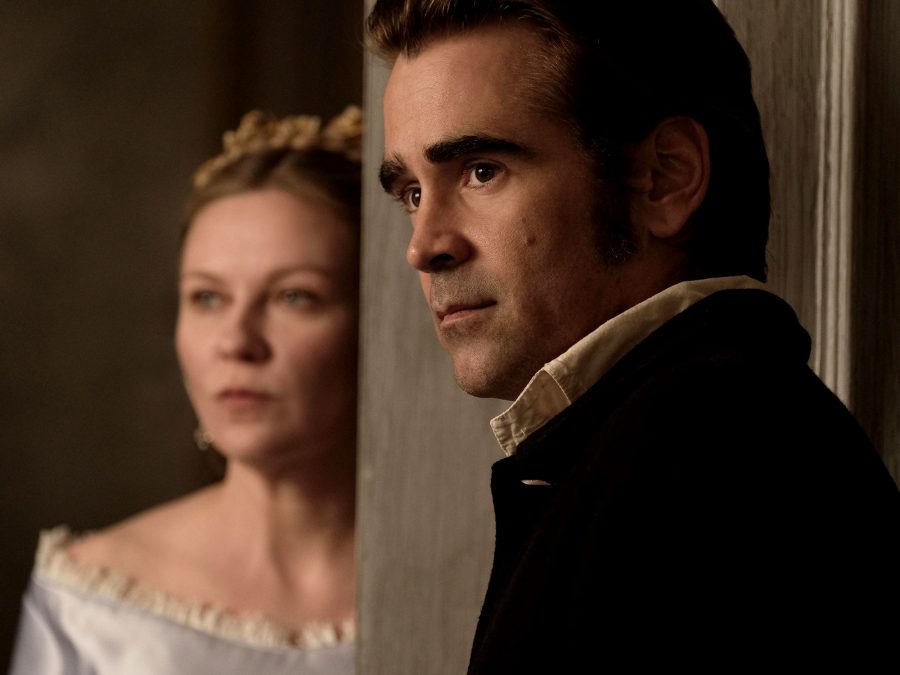 A scene shortly after betrays more sensual urges. The camera drinks in Farrell’s naked torso. His body is tanned and flecked with brown hairs. Kidman – pale and delicate – alternates between staring at him and washing him down. She wets her cloth, wrings it out, and slowly pats down the male form before her. She is appreciative to the point of shock, which conveys just how long it’s been since she saw a man like this. As she progresses to his upper leg, a gasp slips out. Farrell’s knowing eyes bask in his power.

Coppola’s achievement here is the creation of a tone that is perfectly poised between straight-laced good behaviour and the sexual impulses throbbing beneath. That, more or less, is the film. Coppola has decluttered Thomas Culinan’s 1966 source novel, and cut the character of a black female slave, in order to brew an atmosphere defined by sex rather than politics. Visually speaking, every frame is intoxicating, with a palette of rich creams and deep browns (the girls’ skin tone versus John’s).

Just as in The Virgin Suicides, feminine clothes are fetishised, adding life to this barren place. With laces, satins and corsets, costume designer Stacey Battat shows that these women are bound by the uniform of femininity, just as they are trapped in this life. Amidst images of peachy faces in long dresses, cinematographer Philippe Le Sourd provides routine depictions of the school and its grounds. By returning repeatedly to light shafts falling on trees at different times of day, and mist puffs enveloping the frame, he evokes a daily life defined by stoical routines.

Read our interview with Sofia Coppola

The introduction of a rugged man immediately becomes the thrilling centre around which every day pivots. Unlike in Don Siegel’s enjoyable but overwrought 1971 adaptation, characters are stripped back here. Kirsten Dunst is extremely moving as a repressed woman whose lust is more than she can bear. She looks at John like a woman imprisoned behind glass ogling a feast she’s ashamed of wanting. Kidman is fantastic at very nearly camouflaging her urges. Martha always has a convincing explanation for increasingly dramatic decisions, and delivers her lines with detached authority.

Elle Fanning has a riot with the comparably brazen Alicia, delivering overripe looks with relish and pizzazz. Indeed, The Beguiled is frequently a hoot, as the contrast between what the women say and what they mean reaches a fever pitch. A dinner table scene builds and builds in the secret but transparent code of women peacocking for The Corporal’s attention but while talking about dresses and apple pie. The film is most invested in the dynamic between the women, but humour comes from seeing through the wounded guest’s eyes an absurd comedy of manners, and noting his desperation as the women he thought he had hypnotised prove more lawless than he had imagined.

This is Coppola’s funniest film to date, and also her straightest historic film to date (Marie Antoinette’s colour scheme was pure pop). Still, it is very much a work by a maestro of heady melancholy. Beneath the exquisitely rendered visual and atmospheric gild is a passionate and brilliantly observed lament for female sexuality left to go to seed.

The release of a new Sofia Coppola film should mean a public holiday.

Another pristine bauble of melancholy from a remarkable director.