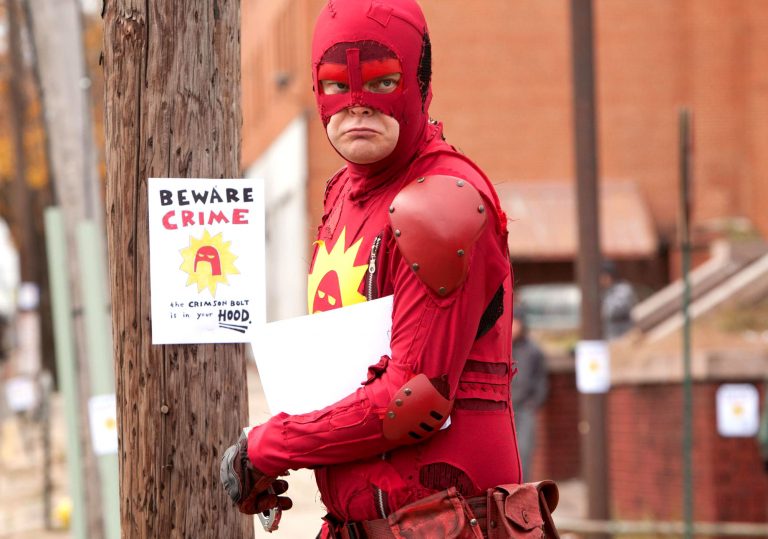 Sounds super – but will it do more than just kick ass?

You won’t see a masked vigilante movie more morally responsible or edgy this side of The Dark Knight (which Super is nothing like).

“You’ve gotta forget about that bitch, she’s a fuckin’ whore,” Frank (Rainn Wilson) is consoled after his wife Sarah (Liv Tyler), a recovering addict, leaves him for jovial drug dealer Jacques (Kevin Bacon). Frank, however, cannot forget – after all, the day of his marriage to Sarah was one of only two perfect moments in a life of otherwise constant pain, humiliation and rejection. To Frank, Sarah is an angel who needs to be saved.

Inspired by either a vivid dream, a psychotic episode, or (as he believes) a divine vision, Frank becomes the Crimson Bolt, a red-suited vigilante on a mission. Armed with his trusty wrench, Frank puts into aggressive practice an uncompromising moral code, and is soon joined in this crime-crushing crusade by manic 22-year-old comic shop clerk Libby (Ellen Page) who, in the guise of the exultantly ultraviolent Boltie, is all too ready to help. In Jacques, Frank will confront his final adversary – and also discover the meaning of his life.

On paper, James Gunn’s Super might sound like a derivative inferior to a recent spate of films featuring nerdish would-be superheroes. Yet unlike its contemporaries, it is not based on a pre-existing comic source (although it is full of comic-book references), and was in fact written by Gunn back in 2003, before even the original comics behind Kick-Ass and Scott Pilgrim vs. the World had yet surfaced.

Not that, even back then, this zero-to-hero morality tale was penned in a vacuum. Gunn acknowledges the influence of, among others, 1984’s The Toxic Avenger by giving a cameo to its director, Lloyd Kaufman. Gunn himself had previously scripted The Specials – a madcap comedy about a second-rank superheroic ensemble – but Super offers humour of an altogether less comfortable variety.

Comparisons to the cartoonish brutality of Kick-Ass are inevitable, but where Matthew Vaughn’s film played a wilfully duplicitous game, simultaneously condemning and celebrating its characters’ violence, Gunn refuses outright to make anything about Frank’s vigilante rampage seem slick, cool or sexy.

Gunn includes many familiar superhero movie tropes, but denies us the usual pleasures associated with them (wish fulfilment, cathartic outlet for sense of injustice) by focusing unflinchingly on the arbitrariness, not to mention the bloody consequences, of Frank’s always questionable – and often questioned – actions.

Frank is a whining, pathetic oddball with extreme prejudice – and Wilson, in a fearless performance, leaves us uncertain whether to sympathise with, or be repulsed by, this ridiculous schlub who bludgeons not just a queue jumper but also his understandably protesting girlfriend; who acts on prophetic visions that he sees in his own vomit; and who ignores pleas for mercy from a (literally) unarmed man. And yet Frank is, as Sarah tells him, ‘good’.

Super is funny alright, but only because, in the moral and emotional disorientation that it so skilfully conjures, nervous laughter seems the only option. Bitchin’ unforgettable!

Sounds super – but will it do more than just kick ass?

You won’t see a masked vigilante movie more morally responsible or edgy this side of The Dark Knight (which Super is nothing like).