John Carpenter’s frantic San Francisco beat ’em up has lost none of its cult appeal. 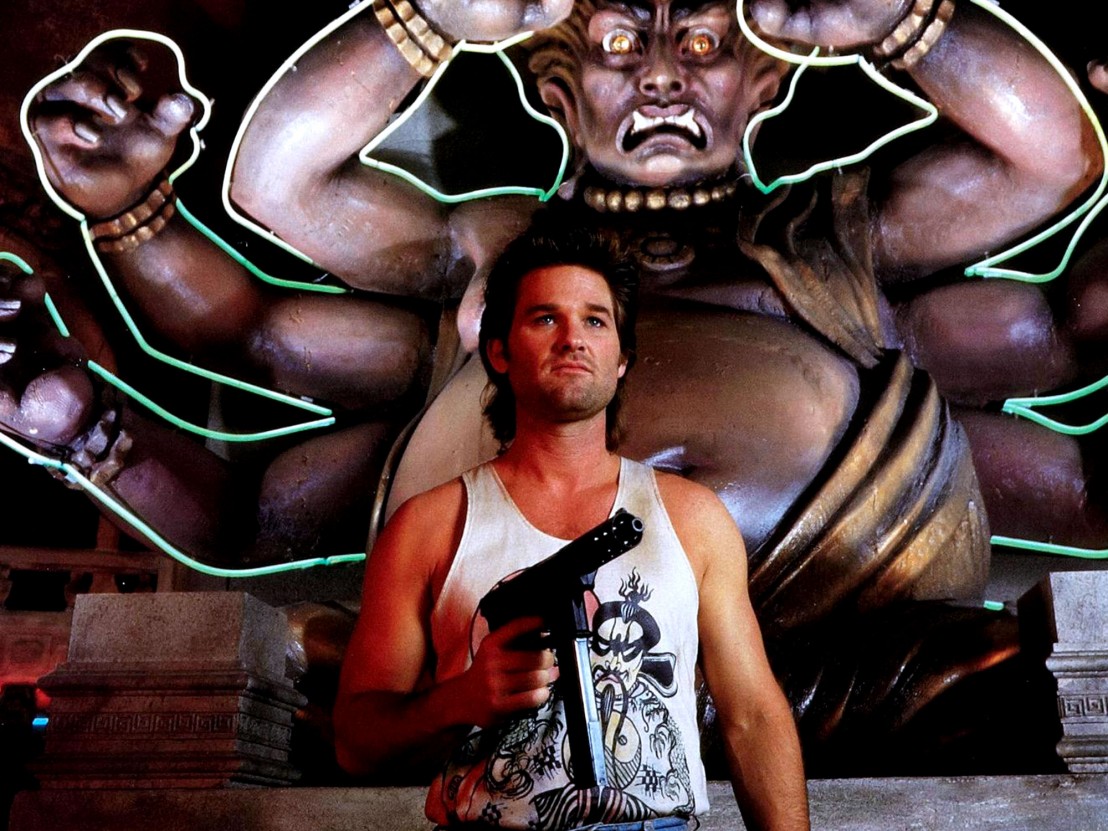 Made at the peak of John Carpenter’s creative powers, Big Trouble in Little China arrived in US theatres in July 1986 to little fanfare. Despite not being a commercial success upon its initial release, the film eventually found an appreciative fan base via the booming home video market. Today, on its 30th anniversary, it remains a firm cult favourite – there are even plans for a big-budget remake starring Dwayne Johnson.

But Big Trouble was a tricky sell at the time for its studio, 20th Century Fox; a contemporary western, high-concept adventure serial, and love letter to the Hong Kong wuxia genre all rolled into one. It is eminently quotable and acutely self-aware, in the same way that all true cult classics are. In some respects it is a culturally important film too; a genre mishmash at least a decade ahead of its time, it set a popular template for post-modernism that would later be employed by the Scream series, the films of Quentin Tarantino (especially Kill Bill), and the likes of Kick-Ass and Scott Pilgrim vs. the World.

The story follows obtuse truck driver Jack Burton (Kurt Russell) and his Chinese-American friend Wang Chi (Dennis Dun), as they become embroiled in a dangerous underground cult led by a 2,000 year-old sorcerer named David Lo Pan (James Hong). Wang’s fiancee Miao Yin (Suzee Pai) is kidnapped by a street gang called The Lords of Death while he and Jack wait for her at the airport. As they pursue the kidnappers, they get caught in the middle of a Chinese gang war in San Francisco’s Chinatown, where Jack’s beloved big rig, the Pork Chop Express, gets stolen.

They soon discover that Miao Yin is to be wed to Lo Pan, who must sacrifice a green-eyed bride so that he may lift his spectral curse of “no flesh” and become a mortal man. Wang enlists a rescue party to help to save Miao Yin, while an incredulous Jack just wants his truck back. Other memorable characters include fast-talking lawyer Gracie Law (Kim Cattrall), who has excellent rapport with Russell – their verbal jousting matches proving a playful invocation of Bogey and Bacall – and Egg Shen (Victor Wong), a tour bus driver who moonlights as both a powerful wizard and ancient enemy of Lo Pan.

There are so many little touches that make Big Trouble great. Lo Pan’s trio of henchmen, the Three Storms, with their iconic coolie hats and weather-based powers, would later inspire some of the designs featured in the video game Mortal Kombat. Wang Chi wears a USAF coverall during the climactic battle in a patriotic ode to his adopted home. Jack’s dialogue is half questions, half quips, and he constantly refers to himself in the third person. Lo Pan is sinister and hilarious at the same time. The widescreen compositions, a hallmark of Carpenter and his go-to cinematographer Dean Cundey (Jurassic Park, Back to the Future), are artful; one shot of a silhouetted Lightning walking down a corridor as a burning ceiling collapses behind him is a particular standout. And Carpenter’s score, produced in collaboration with Alan Howarth, is one of his finest synth-rock efforts.

As with Carpenter’s The Thing before it, Big Trouble’s creature effects freakery shows off the talents of a filmmaker at the top of his game; the sewer ogre, the Eye-of-the-Beholder-esque Guardian, Thunder’s meme-worthy demise, and the undead Lo Pan himself, are a fitting tribute to the outlandish Chinese tradition of jiangshi cinema, while the fight choreography provides an equally reverent take on wuxia. Tsui Hark’s 1983 film Zu Warriors from the Magic Mountain is a clear influence on Carpenter in this regard, and he successfully managed to replicate its heady mix of optical effects, pyrotechnics and wire work. (Incidentally, according to Carpenter many of Big Trouble’s more impressive aerial acrobatics were accomplished simply with trampolines.)

There’s a palpable love for Chinese fantasy here that belies some of the original criticisms of perceived Orientalism – Roger Ebert even described the film as coming, “straight out of the era of Charlie Chan and Fu Manchu, with no apologies and all of the usual stereotypes.” In actuality, Big Trouble was forward-thinking in its subversion of Hollywood racial standards of the time. Carpenter even aspired to cast Jackie Chan in the lead role of Wang Chi after seeing him in Police Story, a full decade before Chan would get his eventual US break. Big Trouble also deserves praise for its lack of whitewashing, something that Hollywood still receives criticism for today.

Russell’s Jack Burton is an important part of this play on expectation; he is really, really dumb, in actuality playing second fiddle to his far more competent friend Wang, the true hero of the film. A wildly entertaining John Wayne homage, Jack never once shows any real indication that he understands the events that are transpiring around him, and remains as bullish at the end of the film as he does at its beginning. Jack’s inadequacy is summed up during one of the film’s best gags – he fires his gun into the air as he lets out a war cry and the rubble from the ceiling knocks him out. He’s a sidekick who doesn’t realise he’s the sidekick, but his bravery is endearing, and we root for him anyway.

Carpenter could always get the best out of Russell – Big Trouble was their fourth collaboration following Elvis, Escape from New York and The Thing – and Jack Burton remains one of the pair’s most enduring creations. Carpenter may have made more important films, but Big Trouble in Little China is easily his most entertaining. If for whatever reason you’ve never been compelled to give it a try, you’d do well to heed Burton’s advice: “Ol’ Jack always says, what the hell?”