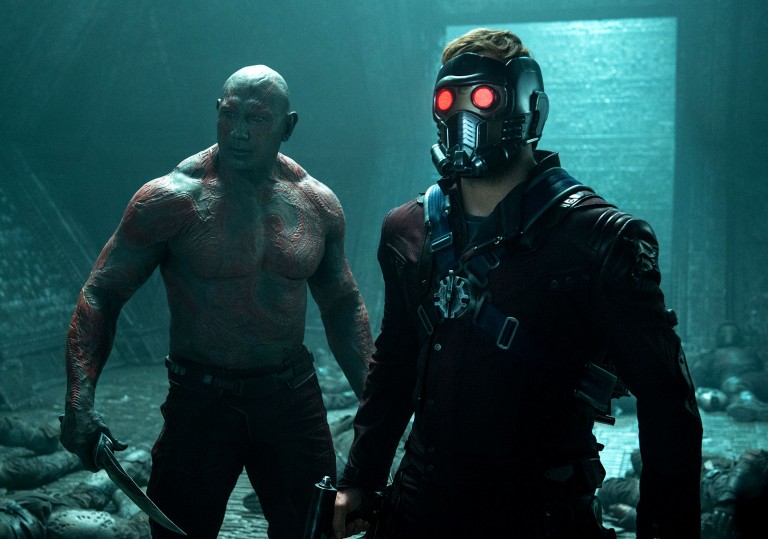 Does the world really need a brand new Marvel franchise?

When the result is as entertaining as this, always.

Here's hoping the Guardians don't ever cross over into another corner of the Marvel Universe.

Starting with 2008’s Iron Man, Marvel Studios spent close to $1b spread across five movies familiarising audiences with its Cinematic Universe. One by one we got to know the Avengers, learning their backstories, their motivations, their allies and enemies, strengths and weaknesses. Excessive? It certainly felt that way. But when Avengers Assemble blasted on to our screens in 2012, suddenly all the pomp and pageantry seemed worth it. It was for Marvel at least. By the time Joss Whedon arose as the newly crowned Geek King of the Universe, the studio’s top brass were rubbing their hands to the tune of $4b in box office coin.

In hindsight, it’s hard to see that largely enjoyable but convoluted preamble as anything more than the cynical, systematic milking of a seemingly perpetual cash cow. Especially now off the back of James Gunn’s spectacular Guardians of the Galaxy, which in its opening half hour achieves what Marvel previously spent a combined 750 minutes doing. Namely, laying the foundations for an unadulterated sugar-rush of a summer blockbuster that packs big laughs and even bigger action into a nimble intergalactic caper. Quite a feat when you consider that the eponymous spacefaring team only made their comic book debut in 2008, and so aren’t ingrained in popular cultural in the way that say, Iron Man or Captain America, are.

So how has Gunn done it? How has he spun a standard-issue superhero plot – misc celestial orb with the capacity to destroy the entire galaxy falls into the wrong hands – around a medley of exotic extraterrestrial freakazoids that includes a bounty hunting racoon, a narcissistic Ent, a green-skinned assassin with serious daddy issues and Benicio del Toro in full Mugatu mode, and come up trumps? Simple. It’s all a matter of keeping it real.

Acclimatising audiences to an unknown alien world and the dizzying array of curious beings that inhabit it would be an insurmountable task were it not for the central, grounding presence of Chris Pratt as Peter Quill, the prankish rogue who goes by the self-given alias ‘Star-Lord’. Essentially playing his Parks and Recreation character living out a Han Solo fantasy, Pratt proves that you don’t need a square jaw or flowing blond locks to prop up a tentpole release. Which is not to say that he’s a less impressive physical specimen, just that – refreshingly – ticket sales aren’t contingent on him getting his kit off.

In some respects, Quill is an old-fashioned sorta sci-fi hero. When we first meet him, busting out of an ancient temple Indiana Jones-style having pinched a priceless artefact, he’s cocky, selfish and chauvinistic. His flaws are obvious and undeniable. And he’s better for it. Indeed, he’s got more in common with Original Series era James Kirk and Jack “Big Trouble” Burton than any of Marvel’s recent franchise darlings. He still represents virtue, only with the caveat that sometimes he can be a bit of a dick. But his basic fallibility doesn’t just make him easy to relate to, it makes him realistic.

This galaxy is no utopia, as encounters with the tyrannical Thanos and chief villain Ronan (Lee Pace) – who looks like Darth Maul auditioning for the Blue Man Group – quickly establish, and as such it’s possible to view Quill as the product of a corrupt system. Technically he’s a criminal, and yet we root for him because, as the film’s only Earth-born protagonist, he displays human qualities that are instantly recognisable and which are reflected in his dysfunctional relationships with fellow Guardians Gamora (Zoe Saldana), Drax (Dave Bautista), Groot (Vin Diesel) and Rocket (Bradley Cooper). It also helps that he’s got a fondness for obscure ’70s pop anthems – the use of the soundtrack as an emotional anchor is a masterstroke from Gunn.

Here’s the skinny. You can have the most dazzling special effects, the slickest action, even Bradley Cooper voicing a trigger-happy rodent, but it all counts for nothing if you don’t give the audience a character they can invest in. Above all, then, this is a triumph of human storytelling. Marvel may not see Guardians as its prize asset, but this could be the start of a truly awesome franchise.

Does the world really need a brand new Marvel franchise?

When the result is as entertaining as this, always.

Here's hoping the Guardians don't ever cross over into another corner of the Marvel Universe.