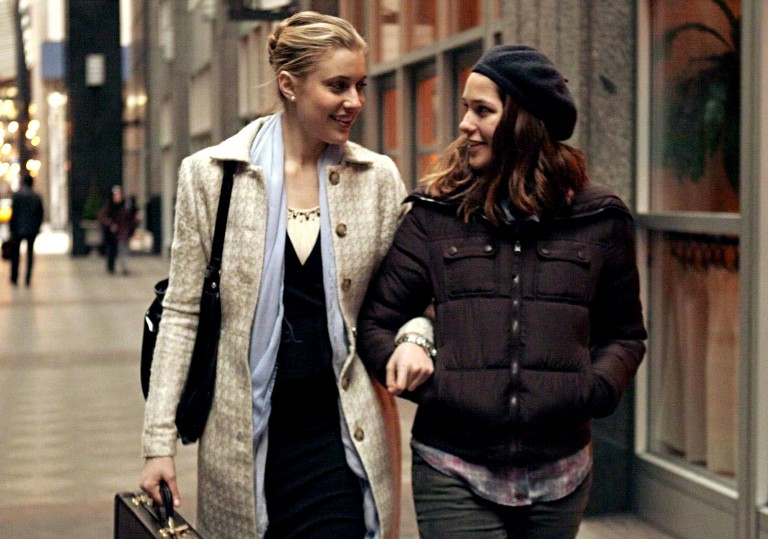 Frances Ha is arguably Noah Baumbach's masterpiece, so very excited to see what he and Greta Gerwig do next.

Too much to unpack in a single sitting.

Tough to decide if it's too clever, or not clever enough. Either way, it's hard not to feel like you're trapped inside something you don't quite get.

Hold on to your hats… Noah Baumbach and Greta Gerwig return with a brisk Brooklyn neo-screwball.

Attempting to break the world land-speed record for snappy dialogue delivery, Noah Baumbach returns with his second feature of 2015 which tips its rakishly-angled straw boater at the screwball heyday of Hecht, Hawks and Sturges (The Palm Bitch Story?).

Mistress America refers to two things: one is Greta Gerwig’s character, Brooke, a happy-clappy career flake with the gift of the gab, but whose words are as shallow as a puddle. Her entry is dazzling, tip-toeing precariously down some stairs on Times Square, moving too fast for comfort, always looking like she’s just about to make a life-ending tumble. Physical self-preservation is secondary to the bubbly entertainments that lay ahead of her.

She offers a somewhat academic representation of the human trait of impulsiveness, its exhilarating in-the-moment joys as well as the pangs of the regret it produces once bitter reality sets in. She is emblematic of The American Dream, the romantic notion of grabbing that chance while it’s there in front of you and flying blindly but purposefully into the sun, whatever the consequences may be.

Mistress America also refers to an idea for a glossy, apocryphal TV drama, one which Brooke reveals to Lola Kirke’s Tracy, a timid English lit major who, due to the impending marriage of their parents, is set to become her step sister. The pair hit it off instantly, with Tracy simply happy to allow the giant breakers of Brooke’s unalloyed enthusiasm to crash over her. And hey, the longer she basks in Brooke’s immense shadow, the more A material she purloins for her short stories.

The film has much in common with Baumbach’s previous, While We’re Young, in that a surface-level investigation into contemporary social mores (living in Brooklyn is so passé!, etc) covers up its more intellectual sub-themes, notably the question of intellectual property. The script is structured around a number of cases of ideas being formulated, appropriated and maligned, and it eventually seems to suggest that there can never be a single rigid law which irrevocably connects creative endeavour to the person who coined it. It asks the question, when is an idea an idea? And is it still the same idea if someone else takes it and executes it? It sounds a tad heavy, but this is all swaddled under layers of brisk comic levity.

Gerwig’s character is extremely similar to the one she played in Whit Stillman’s Damsels In Distress, a person whose go-getting nature makes it difficult for her to forge meaningful bonds with normal people. There are self-conscious barbs at social media and literary phoneys which will no doubt make the movie age about as well as 1995 Sandra Bullock vehicle, The Net. It’s a funny film, but one of those funny films where your brain will be telling you that what you’re watching is funny, but will refuse to fire the synapses that would duly evoke a physical response. It offers a brand of humour that results in an internal gesture of wry acknowledgement rather than actual honest-to-goodness laughing.

Though it would be easy to say that Lola Kirke is MVP here, mainly because her character is the one with whom it is most easy to relate, the majority of kudos deserves to be directed at Gerwig, who has managed to create a character who consistently deflects our empathy, but in a strange and not-altogether-comprehensible manner, she still opens herself up enough to earn it. Her Brooke, we discover, is stealthily guileless, and her bombastic confidence a mere defence mechanism against the people she thinks are out to rip her off.

Frances Ha is arguably Noah Baumbach's masterpiece, so very excited to see what he and Greta Gerwig do next.

Too much to unpack in a single sitting.

Tough to decide if it's too clever, or not clever enough. Either way, it's hard not to feel like you're trapped inside something you don't quite get.