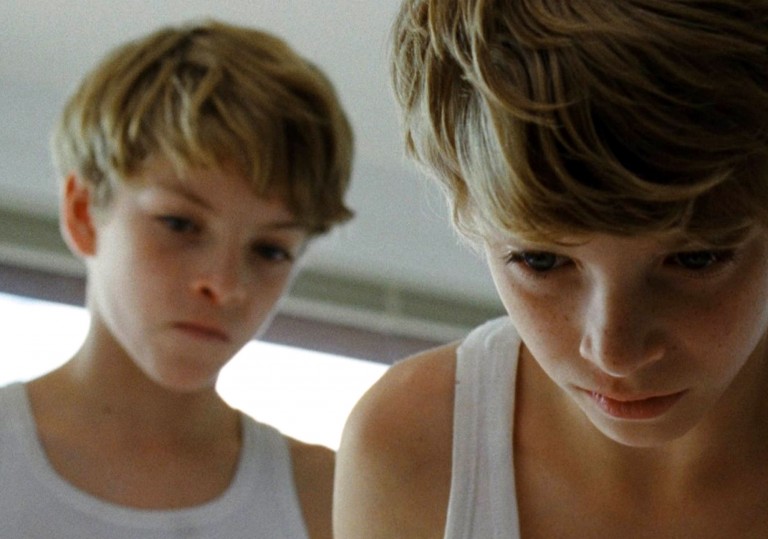 Not a film that’s been on many people’s lips.

So many small details dropped in that a second viewing is vital.

Try as we might, we’ll never truly know who our parents are. This amazing, dismaying film by Severin Fiala and Veronika Franz plays a child’s need for a nurturing parent against a mother’s ability relate to, and empathise with, her offspring.

But what if these two impulses don’t quite meet in the middle? Identical twins Lukas and Elias (played by Lukas and Elias Schwarz) have the run of the countryside, prancing, swimming, playing, exploring – doing all the things that inquisitive pre-teen boys do. Then their mother returns home (a far-flung modernist stack which looks barely lived-in) with bandages covering her face.

The fun and freedom are over, and a life of sedate contemplation begins as mother’s wounds heal. When the boys try to make their own entertainment, mother becomes unreasonably abusive towards them. She slaps them, insults them and punishes them, sometimes even filming it on her smart phone. Then the boys start to believe that this woman, who doesn’t seem to have any knowledge of their relationship prior to this “accident”, might not be who she says she is.

Stylistically and thematically, this Austrian chiller is very much of a piece with the work of countrymen Michael Haneke, Jessica Hausner and Ulrich Seidl (the latter has a story and production credit here). Cold, clinical and shot with steely geometric precision, Fiala and Franz’s film is also like the ultimate homage to Stanley Kubrick’s The Shining, right down to the way the directors communicate an eerie sense of geography, placing the viewer inside this nightmare house along with the frenzied characters.

And while the central mystery keeps the viewer tightly locked into the drama, you’re never entirely convinced that this is a clear-cut case of evil mother versus angelic kids. It’s a belting horror film to kick off 2016, and it’s one whose imaginative scenes of extreme violence are absolutely not for the squeamish.

Not a film that’s been on many people’s lips.

So many small details dropped in that a second viewing is vital.