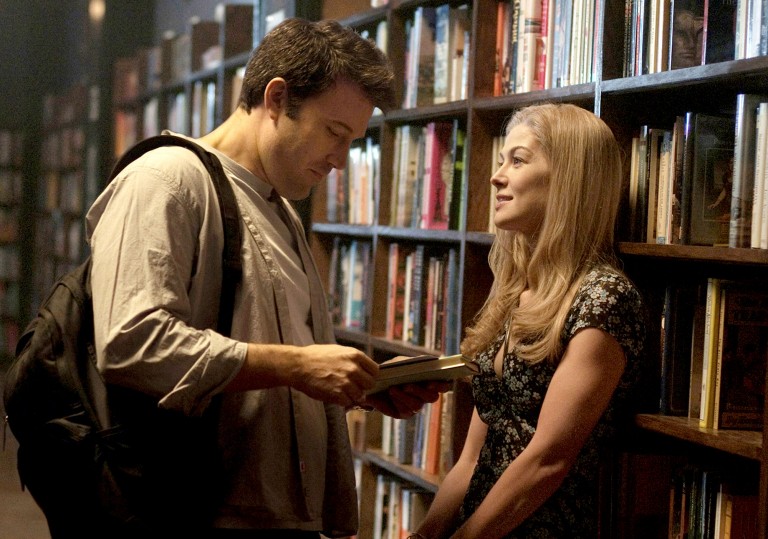 Supercharges the novel while adding its own layers of obfuscation and intrigue. And, of course, it all looks and sounds amazing.

Up there with Fincher’s best. Perhaps his most subtle movie to date, one which (like The Game) will grow in stature as the years roll on.

Have you ever wondered what Fight Club would’ve been like had Brad Pitt and Edward Norton been a darling married couple? It would be nice to chime in with the old, “well wonder no more!” punchline, but that would only be half true with Gone Girl, David Fincher’s box-cutter autopsy of a marriage which is forcibly dismantled and then forcibly reforged in the cobalt blue flames of ignominy, arrogance and deception. So, so much deception.

The film is a neatly abridged and largely faithful adaptation of Gillian Flynn’s multi-directional thriller novel (penned by Flynn herself) which atomised a storm-tossed heterosexual relationship with page flipping brio. The key difference between the book and the film is less a question of content and more a question of weighting. While the mysterious whereabouts of butter-wouldn’t-melt sweetheart Amy Elliott Dunne (the “Girl”, played by Rosamund Pike) was, to an extent, the central dramatic gambit in the book, it seems like Fincher sees it as more of a distraction, a flaccid outer membrane that shrouds the real gore of the matter.

Writer and director find more common ground in the self-conscious and extremely skilful use of quotation marks: is this trash, or is this “trash”? Gone Girl may even be considered the ne plus ultra of meta trash fiction, every frame operating on some treacherous duel level of sincerity versus cynicism. One of the early scenes shows the initial courtship of dashing alpha dude-bro Nick (Ben Affleck) and Amy at a Manhattan soiree, where she’s looking like a little lost fawn, and so he swoops in and rescues her from a rogues gallery of indie-schmindie douchebags.

So pre-acquainted are they with the formulations of banal party patter that their vigorous avoidance of romantic candour offers the viewer a premonition of the road bumps ahead. But then Fincher clearly feels that this mode, this anti-earnestness, is in fact the new norm – being aware of the clichés is in itself a cliché. And so he duly pumps up Trent Reznor and Atticus Ross’ ambient dot-and-loopy soundtrack so their words are barely audible. We don’t need to hear them. We know them. We know how this plays out.

The veneer of sociability and amicability faked by so many (if not all?) of the characters in this movie is a posture that Fincher himself assumes, come-hither coaxing with one hand and bouncing your head off the wall with the other. To some extent, Flynn and Fincher are themselves bonded in a shotgun marriage of convenience where you sense that, artistically speaking, both parties see, or at least present themselves as something completely different to what they actually are. Masks under masks under masks… Even as Flynn has nobly and brilliantly repurposed her novel for the screen, Fincher has then repurposed her screenplay further to meet his own nefarious ends.

Though much of the basic plot remains, the bulk of the book’s attempts at contextualising the central relationship and placing it within the American political now are largely muffled, as Fincher is a filmmaker who always seems more interested in the passing of time as an abstract rather than a literal concept. In the book, characters had clear(er) motivations for their actions, and the film only gains access to truly dangerous territory by recognising that it makes for much, much scarier and philosophically rich viewing if we don’t comprehend why these people are doing what they are doing. Or, to look at it another way, that what they are doing is completely normal and doesn’t need explaining.

In an interview with Film Comment magazine, Alfred Hitchcock’s Vertigo is brought up as an obvious comparison piece, though it feels like more of a kindred spirit to Otto Preminger’s Laura (structurally) and Ingmar Bergman’s Scenes From a Marriage (thematically). Via the Badalamenti-ish score, there may even be a connection to be made with David Lynch’s Blue Velvet, a film which itself transcends mere picket-fence satire once you dare to ask, who actually is the bad guy here?

Its presentation of suburbia, the south of America (as compared to the liberal, enlightened north) and the festering horror which lurks inside pristine mini-mansions certainly suggests more that a tacit link. Fincher’s rarified, crystalline directorial mode fits this story like a glove, making the rot behind the sheen all the more putrefying.

But, first and foremost, this is a Fincher joint to its core, and while grand guignol set pieces are all very welcome, the real pleasure of this movie derives from its exhaustive examination into the very fibres of a modern relationship and the presentation of its findings as a catalogue of compromises, deceptions and derelictions of duty.

His previous feature, The Girl with the Dragon Tattoo, looked into ideas of the essential unknowability of other people and the fluid nature of trust within the framework of a twisty potboiler. These were the film’s ultimate revelations. With Gone Girl, these ideas form the basis of the entire movie, the lifeblood rather than the byproduct. It uses them as an engine for its narrative convulsions, but also as a way to say something profound about where we are as a race.

This is where the 24-hour TV news cycle comes in, and even suggests that this could be the closing chapter of a trilogy of films about life and love in the digital age which began with The Social Network. As events in the film play out, panel shows, news pundits and twitter feeds are swift to offer their unique spin on things, spouting wild conjecture as if it’s copper-bottomed fact. Nick goes on to a chat show to profess his innocence and discovers that he’s been accepted back into the nations arms just seconds after the broadcast has ended. From shitbag to sweetheart in the bat of an eye.

The manner in which Fincher stages the rolling news coverage is baldly contemptuous, but it plugs the movie into the modern age. Maybe Gone Girl is a movie about the death of process, Fincher’s lamentation for a time when stories and ideas could play out as single, complete entities rather than micro-sized packages of speculation and heavily-caveated bursts of information. Detective Rhonda Boney (Kim Dickens) carries our her investigation with a listlessness which suggests she’s palpably aware that cold hard casework isn’t what gets a job done these days.

It’s about pop psychology and how the facts float on the ocean of fickle public backwash. Piecemeal snippets are tainted by subjective thought, and the collective hunger to say something, anything, will, in the end, prevent justice from prevailing. The film itself almost feels custom-built for the Twitter age, constantly demanding that you form an opinion before it stealthy undercuts everything that’s come before it. Twitter and movie montage are the same thing.

Even its themes appear to be playing directly into the hands of think-piece culture. To make a binary judgement call on whether the material – or the emphasis Fincher/Flynn places on aspects of it – promotes a misogynist agenda would be foolhardy, but that’s not to say the pair don’t take things very close to the edge. The manner in which Amy uses pregnancy as a bargaining chip in her marriage, or women shown using rape as a revenge tactic, or even the title’s somewhat glib and loaded decision to refer to Amy as a “girl” (alternate title: Wayward Woman?) all seem primed to incite outrage and poison-penned internet screeds.

Even that timeworn critical get-out clause, “it’s not misogynist because it’s about misogyny,” feels unwarranted in this case, so slippery is the way it deals with time and perception, what’s the truth, what’s not, what happened, what didn’t, where are we, what time is it, who’s nightmare are we in now, is any of this goddamn thing real.

Supercharges the novel while adding its own layers of obfuscation and intrigue. And, of course, it all looks and sounds amazing.

Up there with Fincher’s best. Perhaps his most subtle movie to date, one which (like The Game) will grow in stature as the years roll on.