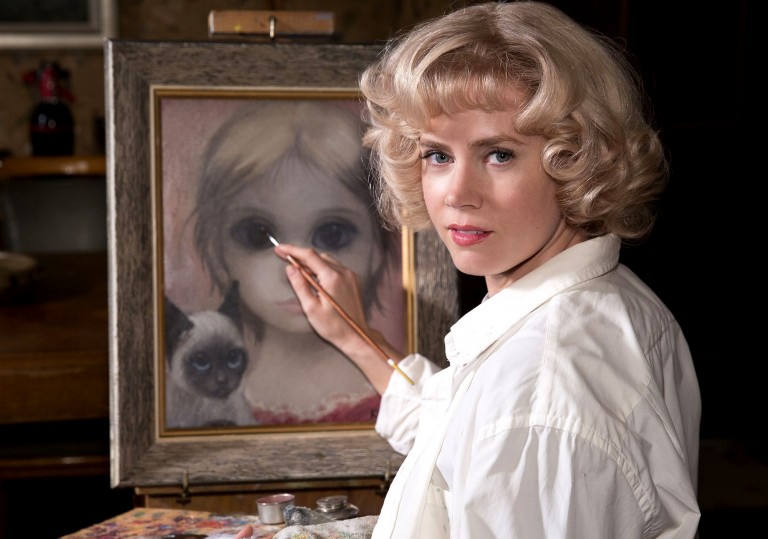 The films Tim Burton's rep is trading on seem to have been from a long, long time ago.

A simply told stranger-than-fiction biog which, at the very least, zooms by.

The more you think about it, the more you see all the subtextual tricks that were missed.

In the story of painter and illustrator Margaret Keane, famed for her slushily sentimental depictions of small children (“naifs”) with oversized eyes and usually furnished with a sad-looking kitten or puppy, one might think that director Tim Burton – perhaps after John Waters, modern cinema’s foremost connoisseur of kitsch – had located the perfect material.

Yet the plot thickens, as the events of her life only encompass a cursory discussion of whether the work she produced (and still produces) had any real artistic value. An opening-credit quotation by Andy Warhol sees the pop art titan affirming that Americans voted with their pocket books when it came to questions of Keane’s credibility, while also suggesting that Burton and writers Scott Alexander and Larry Karaszewski are unquestioning in their belief that what she created is Art with a capital ‘A’. Margaret is a hero, and this is her tragic tale.

Yet Big Eyes may have been a more interesting film were its makers’ predilections not so front-and-centre. The drama here derives from the antagonistic relationship she fostered with her husband, Walter Keane (Christophe Waltz in full Hans Landa mode), a smooth-talking wag who wielded a toothy grin and his own big eyes so he may slowly take credit for his wife’s work. As played by Amy Adams, Margaret is unworldly, naive and unable to fault her husband’s queer logic, a task made even tougher due to the fact that he’s a formidable businessman and is able to sell poster reproductions of paintings to the braying masses.

From the first moment Walter is shown on screen – shilling his own apparently worthless Parisian street scene paintings at a market with self-aggrandising vim – it’s clear that he’s the bad guy. It’s through his nous and quick-thinking that the first vital commercial breakthrough is made. Yet, the film is only interested in exploring how awful it is that Margaret is having the fruits of her personal creativity relinquished from her – unquestioning of whether the fame she enjoys would’ve ever been possible were it not for her abusive partnership with Walter. That’s not to say what happened to her was a good thing, but it would’ve been a radical move had the film not been so quick to her defence.

Perhaps locating his muse in Keane’s paintings, Burton opts for channeling broad, unambiguous emotions toward the screen, seldom searching for a way to explore the subtexts in anything bar an entirely superficial manner. The idea that Margaret has no idea how her work exists in the world while she’s locked in a cupboard as a one-woman painting conveyer belt could be the subject of an entire movie, though here it’s manifest in a slap-dash scene of Keane discovering a display of her work at a local supermarket.

Also brushed upon is the idea that Walter arrives at a point where he believes his own horrid ruse so fervently that he has started to attack art critics when they write bad reviews of “his” work. Waltz plays the part with a certain wily clownishness which serves to make anything that might lend psychological depth to his character easily explainable as being just bad. Perhaps the most interesting aspect of the entire film is less the notion of what it’s like to take full credit for other people’s work, but what it’s like to credit for other people’s bad work. Again, an idea that is mentioned briefly, and then duly sped away from.

The final question to ask, then, is whether Burton sees more of himself in Margaret or in Walter. Is he the maligned trash artist who produces watered-down, mass-market kitsch with utter sincerity? Or is he the snake-oily charlatan who has made a name for himself by leeching off the inspiration of others, prompting the question, can the creation of art every truly be an act of entirely personal endeavour? Does art even exist if no-one is looking at it? Burton is looking at Margaret when he maybe should’ve been looking at Walter.

The films Tim Burton's rep is trading on seem to have been from a long, long time ago.

A simply told stranger-than-fiction biog which, at the very least, zooms by.

The more you think about it, the more you see all the subtextual tricks that were missed.