Sebastián Lelio: ‘We need better stories if we want to have better societies’

The Chilean director on the very contemporary political and philosophical questions at the core of literary period piece, The Wonder.

Adapted from Emma Donoghue’s 2016 novel ‘The Wonder’, Sebastián Lelio’s ominous new film follows Lib (Florence Pugh), an English nurse hired to watch over 11-year-old Anna (Kila Lord Cassidy) in a small Irish village in 1862. The girl has mysteriously not eaten for four months, yet she appears to be perfectly healthy, insisting that she survives only through “manna from heaven”.

The usually realist Lelio pivots here to Brechtian storytelling devices through this obscure historical footnote of the Victorian “fasting girls”, which becomes narrative fuel for his exploration of the clash between science and faith, reason and superstition. We spoke to the director about the process of adaptation, the elasticity of belief in our “post-truth” era, and the risks of embracing artifice.

LWLies: The Wonder marks quite a change of setting for you. What drew you to this material?

Sebastián Lelio: I read the novel and I loved it right away. I thought it was really difficult territory. A minefield. But I just couldn’t say no, mainly because of the two women at the centre of the story. Emma was very generous in adapting the material from her novel — the very complete, rich universe that she beautifully made, and going through the sometimes brutal process of translating that into the economic language that a film needs. More than the fasting girls phenomenon, what attracted me is the clashing ways of reading reality, and the journey that Lib (Florence Pugh) has to go through. She first uses reason to try to understand the mechanics connecting the dots, and because of Florence’s great talent, her thoughts are almost palpable. By the time she understands the mechanics of how the girl is kept alive, the film also reveals the reason why the girl is making the sacrifice. Love requires some action, some intervention, and so Lib has to transcend her own belief system to save herself and hopefully the girl. That spiritual and intellectual elasticity, as opposed to fanaticism, I really connected with. I thought it was great cinematic territory and a great journey for a great actress.

How did you work to achieve synergy between the two leads? Florence Pugh is stellar, and Kíla Lord Cassidy gives an outstanding debut performance.

The Wonder needed an actor that was capable of bringing viewers on her side, so I was very happy when Florence accepted. As she moves forward in the story, you’re thinking what she thinks. It’s that illusion that you are almost listening to her thoughts. Florence’s integrity, profundity and magnetism allows that to happen. You’re on her side, and that’s a talent that Florence has. At the centre of the story we have this very particular relationship between an adult nurse and a very young girl. I really liked how particular that was. It’s not usual to see that transgenerational sorority – I just love that relationship.

With Kíla, when we saw her tape I was speechless. She was 11. What she sent was incredible. She is extremely committed and has a deep understanding of the character. I think it’s also because she is the daughter of actors. Her mother, Elaine Cassidy, plays her mother in the film. It’s one of those talents that are at the same time natural and inherited. We needed Florence to be challenged by the girl and the other way around too, because it is about that relationship. At times, it’s tender, and at times it’s a duel. You need that collision, that friction and then that complicity. Both of them together, generated something really special.

There’s a scene where Lib says that Anna’s situation is not a philosophical point to be discussed, that she’s looking for facts and not stories, which is evocative of the post-truth era we’re in.

It’s precisely because of that. We are in this post-factual era and the biggest casualty is truth. We have the feeling that we are inside a mirror salon and we don’t know which reflection to live in. Now, after having killed truth, after the collapse of religion and ideology, after two World Wars, we’re in this very asphyxiating moment where we don’t know who or what to believe, but we are becoming more and more aware of the power of the mechanisms of fiction. That’s the other thing that really interested me about the novel. Lib already had a sort of meta presence as the unwanted foreigner that is analysing everything, almost like a filmmaker does, so I just pushed that a little bit farther in order to turn the film itself into part of the problem. We need better stories if we want to have better societies. Stories by default are what they are, and will take you to known places. Stories by choice can have the potential of creating new, moral, ethical spaces to inhabit individually and collectively.

Can you talk about your motivation to embrace artifice as a framing device?

The film exposes its artifice, saying that the viewer will be exposed to characters that deeply believe in their stories. It invites the viewer to believe in the film. It reminds them that they have forgotten, and that they are completely believing in what they’re seeing. And after you see how the characters deal precisely with transcending or not transcending their belief systems, and how Lib finds her solution to the conundrum. I think ultimately, the film is asking the viewer, what do you believe in? Do you know that you believe? Do you know that there’s no way you can’t avoid having to believe in something? Are you willing by default or by choice? What you believe is not only about entertainment, it’s — especially today — urgently political.

I’m curious about your choice to foreground the character of Kitty within that.

I found it exciting to turn a minor secondary character into the consciousness of the film. To give her that power, to be there oscillating between being inside the suspension of disbelief, at the same time aware that you’re believing. Niamh Algar, who I consider to be a great actress, provides that double movement. She places the narration in two dimensions: There, in 1862, in once upon a time; and Now, urgently today. It’s a way of saying this is not really 1862, of course, or something that only happened then. It is happening now and it will continue to happen unless we change our belief systems regarding the power relationships between men and women.

This critical engagement also comes across through space and blocking. Anna’s room being on a mezzanine level, the particular order that the council of men is sitting in…

Many of those were from the writing. There was always something very appropriately fixed about the committee of men that have political and economic power dictating what things should be like and controlling the narrative, as opposed to Lib and the nun in this case that are standing in front of them. I think that’s part of the poetics of the use of space. Same with the mezzanine. She has been put there because they are all wanting and willing to believe in her holiness and superiority. We tried to use those elements expressively. We drew the entire field, together with Ari Wegner. I consider her a great co-creator, and an amazing artist. We took two weeks in pre-production, and found the dramatics and the visual language of it. It’s all a decision.

The Wonder is available to view on Netflix now. 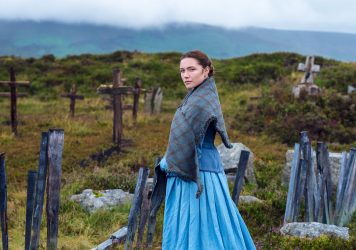 Sebastián Lelio’s 19th-century drama dwells in the gothic-bucolic as a nurse watches over a girl who has survived months without food.