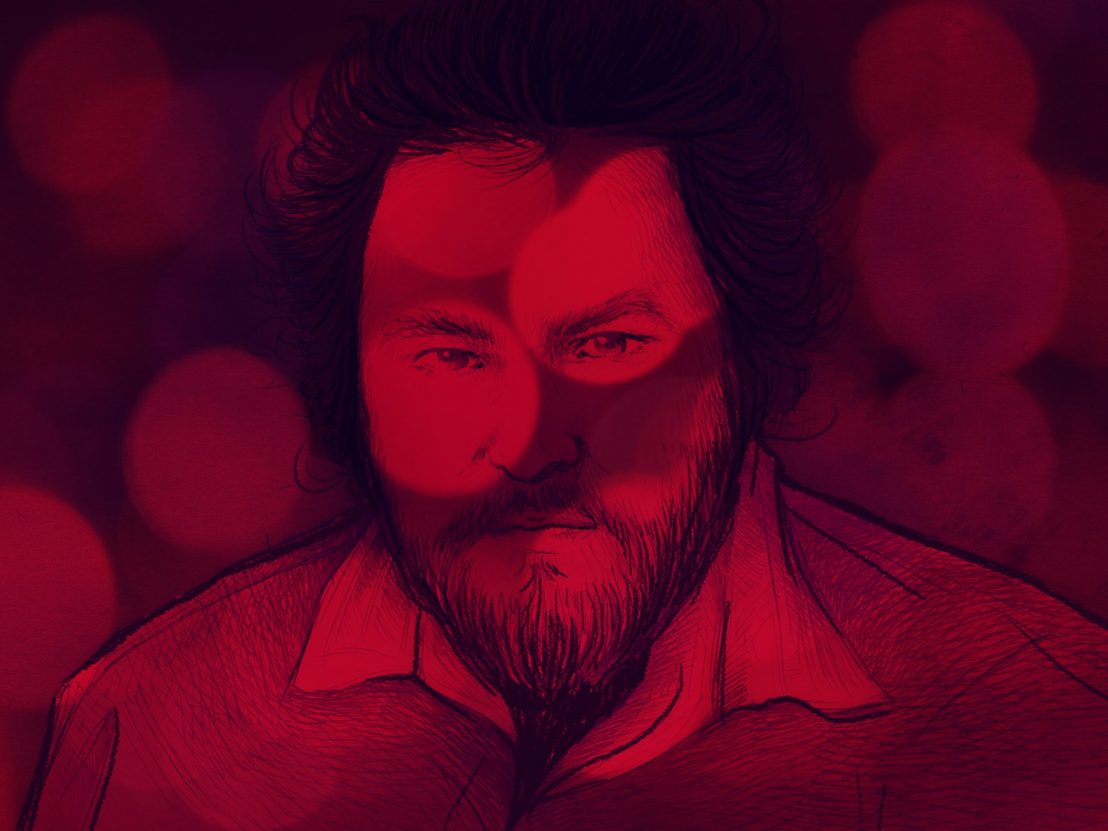 It’s hard to know how Panos Cosmatos broke into the cut-throat world of moviemaking. He is a gentle giant – softly spoken, thoughtful, and peppers each declamation with an ‘I can’t believe I’m here’ giggle. We met the Canadian director in anticipation of his second feature, Mandy, a treacle-slow dream dirge into revenge genre which stars Nicolas Cage with the dials turn up beyond 11.

Set in the early 1980s, the film sees Cage’s character living an idyllic existence in Utah’s Crystal Lake mountains, his loving partner Mandy (Andrea Riseborough) by his side. When a minibus full of fundamentalist christians roll by, mayhem ensues. Actually, mayhem is neither a strong nor visceral enough word for what happens.

LWLies: When you have an idea, for a moment or an image, how do you remember that?

Mandy is such a visual film, it’s hard to imagine what the descriptions would read like.

When you say images, are you talking about film stills?

Both film stills and photographs. Then I’ll put a playlist together of the vibe that I want and I’ll title it. It’s like the old Samuel Z Arkoff thing: make a movie from a poster. So not just writing a story, but building a reality and language, trying to integrate whatever themes are in the back of your mind. As I say, it’s an iterative process. In the back of my mind I’m almost trying to keep a structure together, a very simple story. I’m not interested in the comedy or the ultra-complex plot. I’m interested in a simple story that allows all things to grow around it.

The film is driven by a primal notion of revenge. When did that idea come to you?

Lately I’ll watch every movie in a series and become fixated on that template. I wrote a slasher film called Beyond the Black Rainbow, and that came after I watched every single Friday the 13th movie in a row. You become aware of patterns and primal simplicities. And with this one I had watched all of the Death Wish films in a row. I like revenge films because it’s a very direct emotional journey. The ’80s glamorised the act of revenge.

Yeah. I’m a very lefty person, but I noticed around the time of having this idea that the revenge films coming out were extremely moralistic, almost apologetic for being revenge films. I wanted to make a movie that revels in an almost Wild West-like act of revenge. And that’s when I started moving to the forest and looking at fantasy films. What I wanted was a barbarian reverie.

Do you have any interest in those GOR novels that have illustrations of barbarians holding on to scantily clad women?

I love Robert E Howard and HP Lovecraft. They had a friendship and it makes sense when you read their work. Both of them are able to invoke this highly sensual atmosphere, a mystical concept, difficult feelings and lands. But I like Robert E Howard a lot.

One detail that I found fascinating – I guess this might glue back to the idea of this film being rooted in barbarian myths – I loved the battle axe. Could you talk a bit of the design of that?

It’s actually a shape. A friend of mine called Jeffrey Holliday designed it. He basically took the shape of the F from the Celtic Frost logo.

A metal band. From the ’80s. One of the other layers I wanted to weave into these things is the idea that these are action figures for some toy line that ever existed. I feel like these almost look like sub-Masters of the Universe line. In Black Rainbow, when we lived in Mexico, we would go to the market and there would be like knockoff action figures on the wall. I liked the idea of creating this sort of naïve art version of classic action figures.

Nicolas Cage reportedly saw Black Rainbow and then approached you and said, ‘Let’s work’. How familiar were you with the Cage corpus before that?

Heavily. He is easily one of my favourite actors in the world. I adore his acting. I think he’s a very special creature. I think he understands films, pop culture and his place in that as a sort of head key. He has this sort of wild spirit to explore within his contract. And I think that’s really exhilarating to work with. So once he was on board I rewrote some stuff to tailor it to him.

Did you revisit any of his films prior after he signed up?

No. I wanted to keep it fresh. But I just think he’s an incredibly versatile and powerful actor. I’m really proud of his performance because I feel it runs the gamut of extremes.

There’s a sequence where he’s watching TV with Andrea Riseborough and it’s one of the most tender scene I’ve ever seen him in.

I really wanted to build from a natural place. A place that was much more expressionistic, so to speak. In talking with him we sort of designed this path, this territory which was: he starts as a normal man, after death he enters this kind of primal animal mode, and then after he takes the drugs, the hallucinogenic, he enters this sort of monolithic headspace modelled on Jason Voorhees. I gave him Friday the 13th Part VII to watch. That’s the one where it’s kind of like Carrie meets Friday the 13th. There’s a psychic girl in it.

With regards to Cage, you read stories about the fact that he’s quite collaborative and creative on set. Is that true?

I don’t think he watches me at all. I’ve heard stories about him trying to do things without the director. But I feel that, in the context of this film, that we had enough of a rapport for that not to happen. He would discuss things with me.

What about that wig out scene? Can you talk about how everyone prepped for that scene?

Nic is that kind of guy that when he comes on set will engage in whatever theatrical place you’re ready to go. I decided I just wanted to shoot it in a one-shot frame so it almost had a one-act play theatre feeling.

The film opens with ‘Starless’ by King Crimson – was that a result of the playlist?

Yeah I had thousands and thousands of songs. For me the lyrics are kind of about accepting your fate in a godless world. Around the time that I started writing I made the conscious decision to reject all religion and superstition in my life.

So you were religious before?

Well, I wouldn’t describe myself as religious. I would describe as having had certain religious concepts implanted in my brain at a very young age that I felt were detrimental to me.

Mandy is released in UK cinemas on 12 October. Read the LWLies Recommends review.