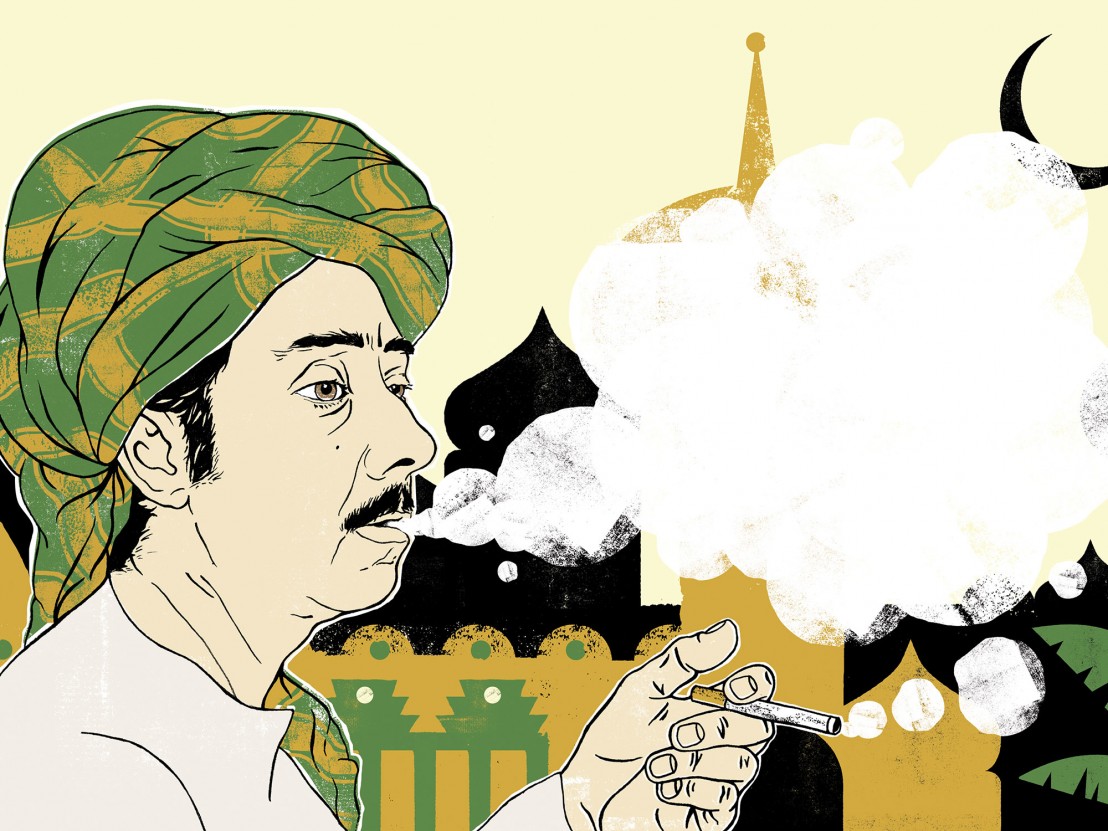 Arabian Nights is less a movie than it is a full blown event. Three films made across an entire year with the aim of chronicling the sour effects of austerity measures imposed on the population of Portugal, its director Miguel Gomes sank his soul into making something equal parts poetry and politics.

He first earned acclaim for his 2008 feature, Our Beloved Month of August, which cleverly mixed fiction and documentary while telling of rural folk traditions in Portugal. His follow-up, Tabu, a rhapsodic, romantic melodrama viewed through all manner of obscure and fanciful angles, made him a household name among cinephiles. We met the director to discuss how he found the stories that ended up being included in Arabian Nights and how he was able to make a personal connection with its subjects.

LWLies: What was the response like to the film in Portugal? Did people get it?

Gomes: I don’t even know if I got it. I don’t know if there’s one way to get this film. I guess that the film is so long because it has so many things in it that everyone who is going to see the film can either get it or not get it in very different ways. But I would say is I was a little more interested this time because the film was completely connected with Portugal and with the present. Everyone suffered with what happened there in the last few years, so I was curious about whether the Portuguese would be more curious to see the film.

Why is this film a trilogy and not one, six hour film?

I guess it would be much more difficult to show it in theatres, but I didn’t divide the film in three parts because of the box office. Of course, it’s an issue when showing the film, but I really thought when I was editing the film that I had three very different cinematographic experiences. For me, you need to reset your mind in between each viewing. But there are some people who tell me, ‘No, it’s much better to see the movies in one go.’ I explain to them that, for me, it’s like having lunch three times. You finish one lunch and then you cannot digest because you’re already eating another one. This interruption between each volume was part of the editing. Each film is autonomous, even though they have a dialogue with the other parts. But my reasoning was that, not the commercial side.

The film is stridently anti-austerity, but did you have any political opposition to the film?

Yeah, I did. About this question, the political issue: Portugal is pretty much divided 50/50. We had two elections in the last few months, and you can see that between the left and the right it’s pretty much split down the middle. As everything went more extreme in the last few years, people’s personal politics are becoming more extreme. The right went so far to the right that, for instance, for the first time after the Portuguese Revolution in 1974, we had an agreement between the Communists and the Ecologists and the Socialists for supporting a Socialist government. The Communists never, ever wanted to do this until now, and this is a result of how extreme the right-wing policy was in recent years. It obliged people to make new alliances in the Left.

Do you feel that this a good thing?

For me this is good news. I don’t know how it will end. I’m not always optimistic, but let’s see. But I remember one guy, after a Q&A in Portugal, saying, ‘I think you’re a good director, but you should be better informed about reality. You’re a good director, so you should make good films, not this bullshit.’ He was obviously sympathetic with the government, and so he was mad that the film was against austerity. He was saying, ‘No, it has saved us. The government saved us.’ I think that this was a big issue, because Portugal is pretty much divided into these two groups: the people that believe the austerity measures were a very good thing and nowadays we have a much better society; and people, like me, that think that Portugal nowadays is a mess and people are much less protected, living in much more difficult situations than before.

When you were filming the chaffinch men at the end of the third part, were they on side with you, politically?

Sometimes, but I guess most of them don’t care. Some of them, like the guy who catches the birds, he votes Communist. He’s an old school left-wing Portuguese guy. But most of the others, they don’t vote and they don’t care. There are people who are so disappointed with the political system that they don’t care.

Did you tell them that you’re making this movie about the horrible things that have happened because of austerity?

They knew about that. But these are the guys that were already completely fucked before the crisis. They live with something like 150 euros of social welfare. They try to survive by catching birds and selling birds, things like that. They know about it, but they think, ‘We were like this before, so now everyone is getting worse, and we’re always in the worst place.’ Most of them were born in slums, and now they’ve been relocated but they’re still very poor.

The chapter about the chaffinches feels like a happy ending to the film. That even though you have this extreme poverty ruining people’s lives, they still manage to build their own culture and their own ways of living. It seems to be about survival.

I agree with you, but if there was another guy next to you saying the opposite of you, saying, ‘In this last chapter, you can understand that the Portuguese are in deep shit, because these guys don’t do much for themselves. How can they progress and try to achieve something else because they’re alienated?’ I would agree in some way. But the story came to me more than I came to the story. I understood that by filming these guys, I was filming how much trouble they are in. They don’t seem to be able to change their situation, so they invent this world with birds and birdsong. They’re inventing these rituals and their own mythology. It’s like a secret world that exists, a secret door that I entered.

Was it easy to enter that door?

Not so much. What they’re doing is illegal in Portugal, they’re not allowed capture and keep these kind of birds in their homes. That’s one of the reasons why they don’t talk so much about it, and why they cover the cages of the birds. If the police come and see the birds, they’ll have to free them and pay a fine. What happens is that they are so aggressive that they have this competition with them where they sing for their territory. If they hear another male singing, they’ll sing. It’s a kind of fight. And to get females, they sing another tune. They’re very aggressive, when you uncover them near another bird, they can go into the net of the cage and hurt themselves.

Do you open the newspaper in the morning and think, ‘Wow, that story could have been in Arabian Nights’? Is it living on with you?

Last week there was this awesome story. I can’t remember now, but in the moment when I read it, it was awesome. When I came up with this film we invented this very scientific formula with three columns, in one of them we put what was coming in the newspapers, in another we put whatever we wanted, fictional things we came up with – someone had a dream yesterday, let’s put the dream in that column. The centre column we left empty, and there we could cross whatever we picked from the newspaper and whatever my editor dreamt two weeks ago and there was this merging. But of course this is a pretext. There was a moment where me and the other guys who wrote the script were invited to Brazil to give a writing workshop. We were working on Arabian Nights so we said we would teach them the three column system, and they took it very seriously. But every day, gradually, they were more and more suspicious. By the end they told me it was bullshit.