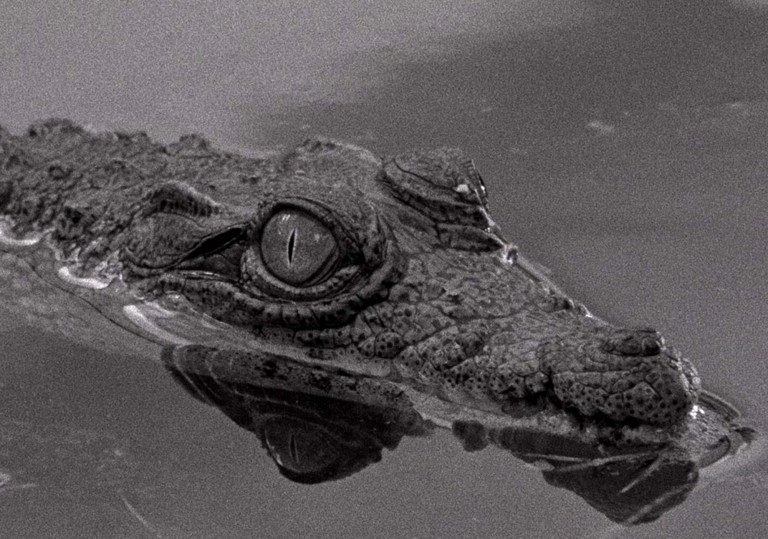 Can the Portuguese boy wonder capitalise on the critical raves aimed at his 2008 film, Our Beloved Month of August?

Oh yes. A new master is born. Gomes knocks it out of the park, only for the ball to reach another park and bounce out of that one, too.

The flashback structure means that multiple viewings are a must. Just breathtaking.

With a cavalier approach to science that only a whimsically inclined filmmaker could get away with, his film posits that, at a certain point in life, our minds begin to romanticise and subvert the past, fusing our humdrum personal histories with the consoling escapist fantasies of the silver screen. Tabu is about life remembered as silent cinema.

Glancing back, Gomes’ diverse catalogue of films makes him a tough director to pin down, especially as his style, reference points, choice of film stock and storytelling mode appear to alter from title to title. Yet his eagerness to pilot his stories through various strata of perception – reality, dreams, memories and fantasy – is perhaps the thread that lends his singular oeuvre its cohesion.

In that light, his tiresomely eccentric debut feature, The Face You Deserve, is more interesting when viewed in hindsight, a Rivettian reverie about a school teacher who contracts the measles and experiences a Seven Dwarves-style fever dream on his thirtieth birthday.

His stunning 2008 follow-up, Our Beloved Month of August, contained intertextual audacity to rival the famous era-spanning edit in Kubrick’s 2001: A Space Odyssey. Near the half-way mark, Gomes’ film insouciantly drifts from being a documentary about rural Portuguese folk music to a fiction film about Portuguese folk musicians.

Tabu broadly carries over this innovation in that it’s a film of two distinctive chapters, the first entitled ‘Paradise’ and the second ‘Paradise Lost’. Yet instead of segueing from non-fiction to fiction, Tabu switches from realism to fantasia, from waking life to dream, from the banal to the exotic, the modern to the archaic, from 35mm to 16mm, from life to cinema.

Initially, we’re allowed to catch up with the harried home life of the do-gooding Pilar (Teresa Madruga) as her desperate attempts at self-purification are constantly stymied by the intrusions of her batty elderly neighbour, the fallen grande dame Miss Aurora (Laura Soveral). Her nonsensical blatherings are ignored by both Pilar and her long-suffering Cape Verdean housemaid, Santa (Isabel Muñoz Cardoso).

On her deathbed, Aurora reveals the name and address of a mysterious local man, Ventura, and as Pilar and Santa sit in the atrium of a tropical-themed shopping centre, he regales them with a fanciful tale of heartbreak and loss that occurred 50 years previously on the picturesque savannahs of a fictional African state and in the vast shadow of Mount Tabu.

Though its sweeping second half recalls such classical touchstones as John Ford’s Mogambo, Frank Borzage’s A Farewell to Arms or even Max Ophüls’ Letter to an Unknown Woman, Gomes’ discernible cinephile tendencies (he used to be a critic) are never elitist or supercilious. His skill as a filmmaker is in making the quote marks invisible.

He enters the worlds of these films rather than referencing them point blank. His film also shares its title (and much romantic baggage) with FW Murnau’s 1931 swansong, Tabu: A Story of the Southern Seas, and alongside its bracingly sincere depiction of doomed young love, it shares Murnau’s subtle backdrop of a society suffering exploitation from the West.

As a writer, Gomes displays a very appealing interest in folklore and social history, especially when it comes to forging his own apocryphal tall tales. The world of Tabu accounts for the unreliability of memory, and though this history does address some of the realities of Portuguese colonialism, it’s flecked with ironies, anachronisms and temporal sleights of hand. The narration of the second half (which he also intones) is a model of literate, epistolary adventure storytelling, and it’s an aspect that dovetails nicely with scenes earlier in the film in which Santa sits up at night leafing through a copy of Defoe’s ‘Robinson Crusoe’.

Despite its ironic employment of Brechtian cultural signifiers, Tabu really does channel the intoxicating, unmistakable mood of classical Hollywood of the 1940s. The gauzy effect of the 16mm stock and the use of 4:3 Academy ratio may technically transport you back to the golden age, but it’s Rui Poças’ gorgeous high-contrast cinematography that lands the aesthetic sucker punch.

One scene sees Ventura loitering in a dark room, staring out at the sun-bleached plains. The interplay between light and shadow is, in itself, utterly exquisite. It makes you think that Gomes has managed to resurrect the spirit of Gregg Toland and supplant it into Poças’ body.

On the soundtrack, Gomes seamlessly works in out-of-time pop songs via an amusing subplot involving a tuxedo-clad lounge combo named Mario’s Band. A scene where they line up along the side of a swimming pool and mime along to the Ramones’ Wall of Sound cover of ‘Baby, I Love You’ offers a sublime articulation of Gomes’ authentic love of sentimental pop music, already seen in Our Beloved Month of August.

A later romantic clinch is tipped over into ecstatic sadness by masterful application of a Portuguese version of The Ronettes’ ‘Be My Baby’. You can almost envision Gomes sitting in the edit room in front of a glistening Steenbeck, momentarily ashtraying his fat stogie and exclaiming to his colleagues, “Time to push it over the top, boys.”

Can the Portuguese boy wonder capitalise on the critical raves aimed at his 2008 film, Our Beloved Month of August?

Oh yes. A new master is born. Gomes knocks it out of the park, only for the ball to reach another park and bounce out of that one, too.

The flashback structure means that multiple viewings are a must. Just breathtaking.