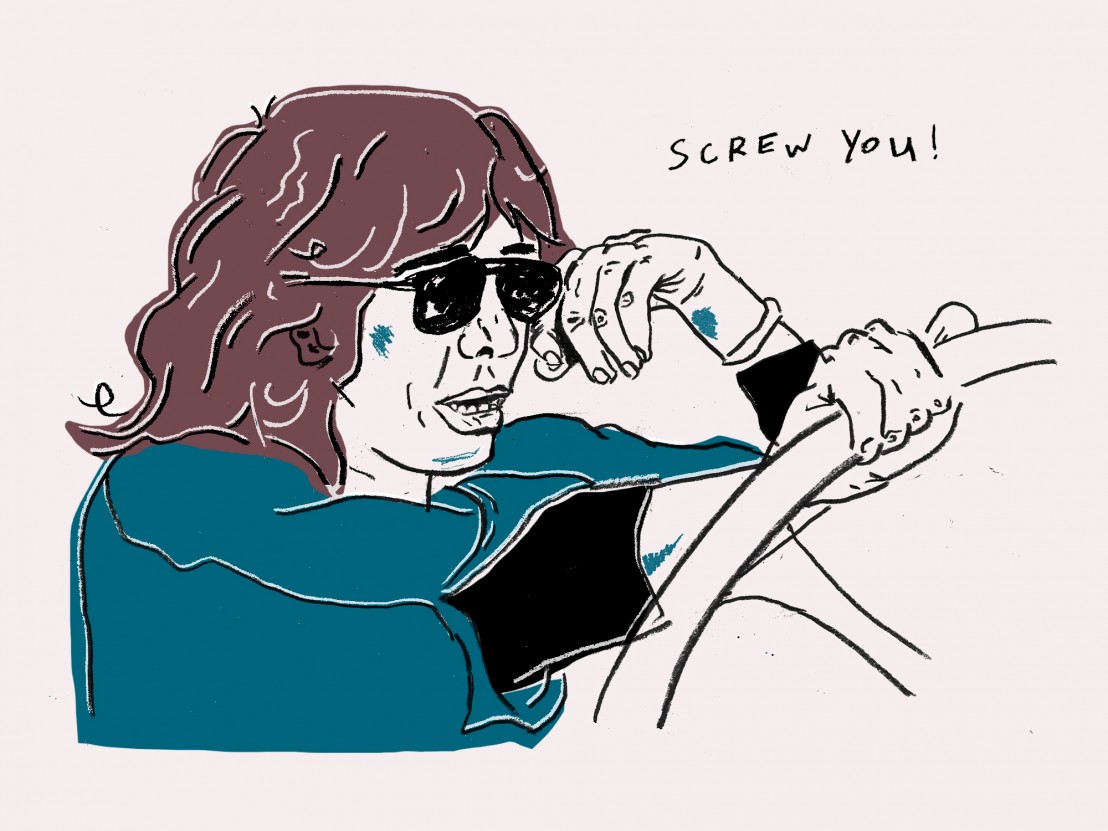 Despicable Hollywood money types are probably kicking themselves for having not cast Lily Tomlin in a leading role until now. She’s a one-time stand-up comedian whose ‘This Is A Recording’ disc – which showcased her belligerent, snorting phone operator Ernestine – garnered acclaim and a Grammy award. Later she became a mainstay on Broadway, and she first entered into film with a small but significant part in Robert Altman’s countercultural state-of-the-nation address, Nashville.

Maybe people thought that a little Lily went a long way, as since her commercial break-out in ball-busting workplace comedy, Nine to Five, she’s remained present, but on the periphery of American cinema. At 79, she’s now enjoying the biggest successes of her career, with a hit Netflix series in Grace and Frankie, and a starring role in Paul Weitz’s Grandma, a delightful road trip comedy in which she plays an ageing lesbian poet who agrees to help her granddaughter stump up $650 for an abortion.

LWLies: The director of Grandma, Paul Weitz, has said that he wrote this movie for and about you. When someone does that, do you feel obliged to then star in the film?

Tomlin: You have to say no if it doesn’t reflect your sensibility! That’s what’s horrible about it all. When Paul told me, the first thing I thought was, ‘Oh crap, what if I don’t like this?’ I read it with great trepidation. But I thought it was wonderful. And we mostly spent time trying to explain why Elle was broke. She had paid off lots of medical bills and then cut up her credit cards to make a wind chime. I wanted the issue of abortion to be treated very realistically and have the gravity that the decision requires. So all that was solved.

Grandma is about a grandma and her granddaughter who, across a single day, have this bonding experience. What was your relationship like with your grandmother?

I did have a little something with her. My grandmother grew up in rural Kentucky. She’s been dead quite a few years now. My own mother has been dead 10 years, and she lived to be 91. My grandmother lived until her mid-’80s. She was very hard of hearing. Deafness ran in the family among the women. I don’t have it. Yet. I look like my father’s side of the family, so I feel like I don’t have that gene. Because of her hearing, she didn’t really participate in the conversation when there was more than one other person talking. She was a very sweet, little tiny woman who was a farm wife all her life.

I didn’t get to spend that much time with her. I grew up in Detroit and I’d go down to Kentucky for the summers. I stayed at her house up until I was about ten, as then I wanted to stay with my cousins who were my age. She was a very caring woman. Whenever I get sick, I can still feel her hand on my forehead. She sat around thinking a lot, rarely talking. One day I went to Paducah with her which is the big city near her farm. We visited her sister, Kate, who is my great aunt. They would be sitting out there on the porch, and they would just laugh and laugh and talk up a storm. I remember sitting near my grandmother and just listening to her. I remember these moments to this day, as it was kind of a bonding experience. Just to realise that my grandmother had once been a young women. She had gone to ice cream suppers when she and her sister were single.

Out in the country, it’s like a little party where they have ice cream. But I had understood something about her. She was not like Elle at all. Not too many grandmothers would be.

With her being from Kentucky, I imagine there would be quite a big political difference.

“The only thing I don’t like about swearing is using body parts as a pejorative. It’s just too debasing of our own fundamental instruments.”

Your character Elle is a poet in the film. Have you ever dabbled?

I have written some poetry, but nothing to be proud of. I had a girlfriend going to the University of Michigan, and they have this landmark place up there called the Arboretum, which is a big garden with trees. I went to Wayne State University, which is in the city which mostly working class people went to. So I had this assignment to write a sonnet, and i went up to the Arboretum and wrote it one day.

What were you studying?

I mostly in humanities, but I quickly switched over to pre-med, because I wanted to be able to get a good job. We totally believed back then that you only did well by doing good. So… the sonnet. It’s totally an 18-year-old version of things. I saw a tree that was growing on a little knoll, and I made it metaphoric. When the wind blew one way, the leaves were ochre, and when the wind blew the other way, they would be magenta. They had two sides to them. So I Identified with the tree. I wish I had it here dammit… It was something like… ‘The summer hills, something, something, the wind tries still to steal her ochre hair.’ It was quite a challenging exercise.

Did Paul Weitz know about this?

No, I forgot to tell him that. But Elle was much more of a street poet, like Eileen Myles. She came to our opening in New York and I got to meet here. So I have tried to write a little. But not seriously.

The character of Elle swears with great relish in the film. How does one swear well?

You have to be mad. You have to be upset at some injustice, some doofus person standing in your way. If you have something like that, then you can just curse up a storm. The only thing I don’t like about swearing is using body parts as a pejorative. It’s just too debasing of our own fundamental instruments. Though I felt I could say ‘asshole’ when Elle’s granddaughter says ‘I’ve got an asshole problem’. I’m really good at swearing, but I know people who can really swear.

Is that people who can creatively string together invective?

The intonation is also important though, and the stress on the words.

I don’t swear a lot in my own work. You might say I ‘work clean’. But I don’t think of it as that.

Is that an industry term?

Yeah, but I don’t like it. It’s nauseating. Years and years ago, Walter Mondale was running for the Democrat party, and I did an industry benefit for him. And I do a monologue in the character of Mrs Beasley who is a middle-American housewife. Jane my partner had written a piece where Mrs Beasley proselytises about vibrators. Unless you were a real raunchy kind of performer, people just didn’t want to hear about that. So Mrs Beasley just has this brilliant monologue where she says [adopts posh Southern accent]: ‘Hello I am not a professional actress, I am a real person like yourself. About a month ago I was shown some products designed to improve the sex lives of housewives. I got so excited that I just had to come here to tell you about them. To look at me you’d never suspect that I was a semi non-orgasmic woman. This means it was possible for me to have an orgasm but highly unlikely. To me, the term “sexual freedom” meant freedom from having to have sex. And then along came Good Vibrations, and was I surprised. Now I’m a regular cat on a hot tin roof.’

And she goes on with it for a couple of minutes… So when I did this monologue, Warren Beatty was there and a whole bunch of people like that. In the trades the next day, they said: ‘Lily offended by doing some blue material’. That was so ridiculous.

You’d think the Democrats would’ve had a bit more humour about it.

You’d think! It was so shocking. They were slow at the starting gate. They were too damn retro.