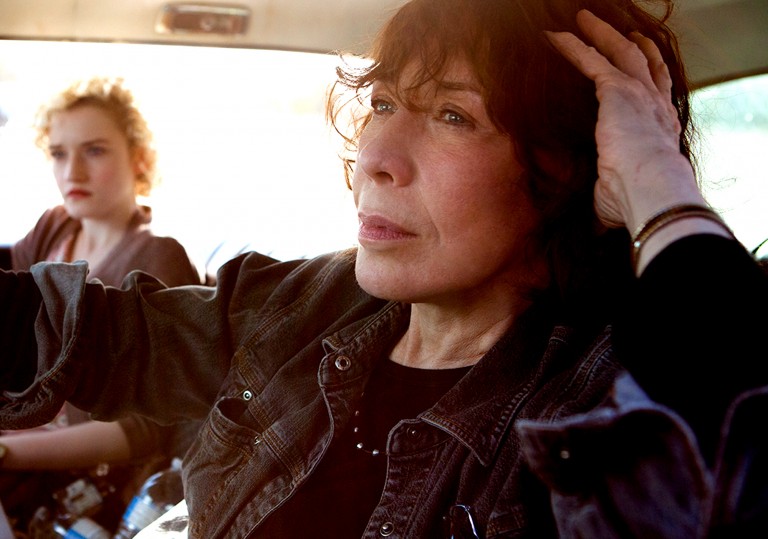 The closing night film at Sundance – could be really good or really cutesy.

Tomlin is very funny, and Garner has a sweet presence. The two work well together.

A fun way to spend an hour and 19 minutes, if not a major work.

Grandma is an easy movie to like, running a fleet 79 minutes and providing a well-deserved showcase for Lily Tomlin. Yet despite its handling of potentially controversial material, it doesn’t leave much of an impression. The plot is simple: a journey from point A to point B with quirky stops along the way. Elle Reid (Tomlin) is the grandma, a brusque lesbian poet who doesn’t suffer fools gladly, and whose granddaughter, Sage (Julia Garner), comes to her for help when she finds herself unexpectedly pregnant without the money to get an abortion.

Abortion is a touchy subject, and this film deserves credit for handling it matter of factly and not having Sage doubt her decision. Overall, it’s tonally similar to last year’s Obvious Child, while avoiding that film’s lapse into cliché rom-com territory. Grandma’s focus is on the relationship between Elle and Sage – Sage’s boyfriend is a buffoonish bro who clearly doesn’t deserve her. Sage, with her blonde curls and fine bone structure, has an angelic quality that stands in contrast to Elle’s tough presence, and the tension between the two of them provides affectionate laughs.

At times, though, Elle feels too much like a Manic Pixie Dream Grandma. Consider early in the film, when we see that she has cut up her credit cards and hung them in a mobile, a means of “transmogrifying” her life into art. If only she hadn’t acted out in such a quirky way, it would’ve been so much easier to help Sage. With little money and no credit cards, they have to visit a variety of Elle’s friends in order to get the $600 they need for the procedure. There is also the moment before walking into the abortion clinic when a young girl protesting outside punches Elle. Being punched by a child feels like some kind of cutesy appropriation of broad comedy, and it doesn’t work.

The film also makes use of intertitles for each chapter of their journey – a device that serves mostly to call attention to details that we would notice anyway. Elle is a poet, and perhaps the intertitles are a way of giving the film a poetic feel, but it seems too self-conscious a device, especially considering the director’s first film was American Pie. Poetic devices or not, Grandma is unquestionably the more subtle film. In one of the strongest sequences, Elle and Sage visit Karl (Sam Elliott), Elle’s former fling.

In a relatively short scene, Tomlin and Elliott establish a believable connection – Elliott’s drawl adds instant gravity to the proceedings, and as the two stand close to one anther, and Elle scans the house, looking at pictures of his children, a believable portrait of a past relationship is painted. Karl ends up refusing to give the money on moral grounds, but the detour is nevertheless valuable, functioning as a play in miniature.

It’s not often we see a film that portrays a 75 year old as multifaceted, and gives her zingers (the way Tomlin delivers the line, “She’s already pregnant!” when a guy looks at her granddaughter is one of the film’s best moments), so Grandma is refreshing in that record. While it is hindered by a number of precious indie trappings, it manages to be an overall poignant film, with two memorable performances at its core.

The closing night film at Sundance – could be really good or really cutesy.

Tomlin is very funny, and Garner has a sweet presence. The two work well together.

A fun way to spend an hour and 19 minutes, if not a major work. 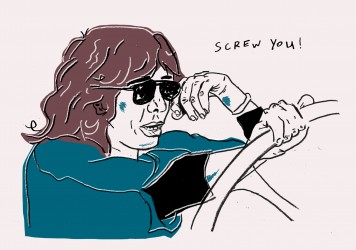