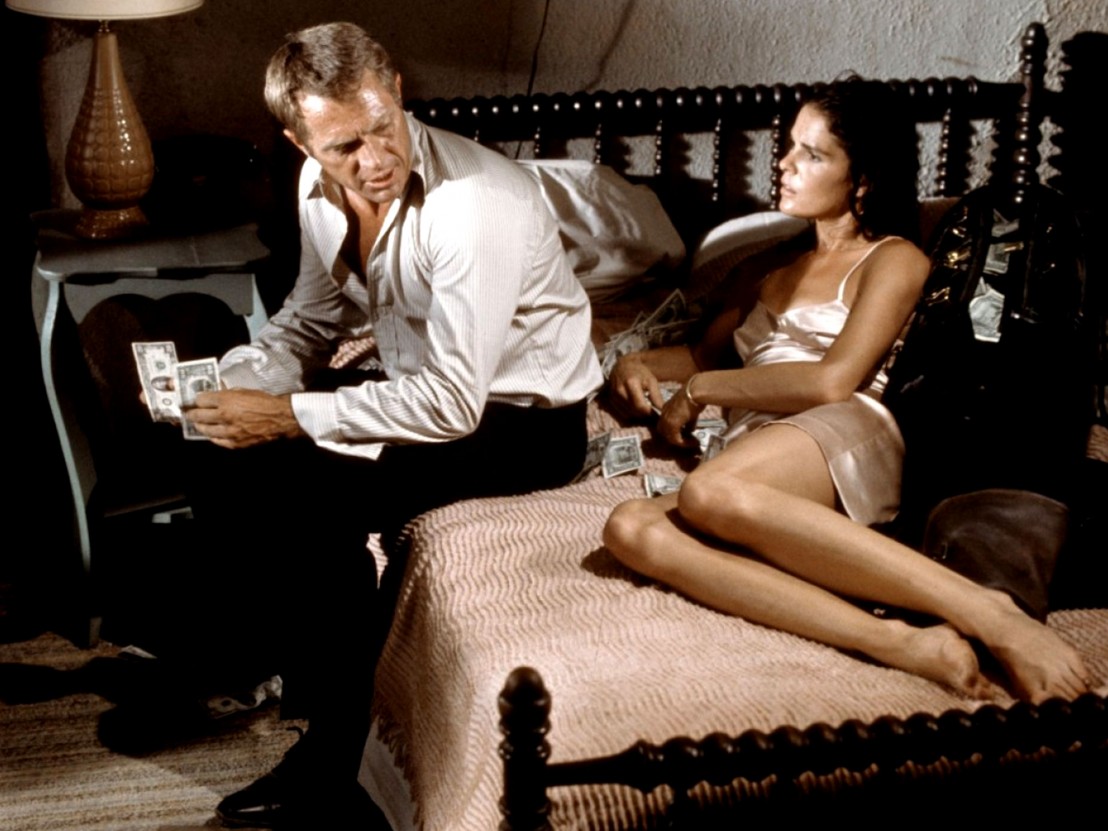 What happens when you love a movie that doesn’t love you back? And what if you’re fond of a film that dismisses and mistreats your entire sex? Situations such as this force you to ask all kinds of questions; am I a hopeless masochist clinging to harmful hegemony of male-domination? Have I been forced to identify with the on-screen male viewpoint for so long that I have developed some kind of film-specific Stockholm Syndrome? Women find themselves in this position rather too frequently. We wonder if self-love and movie love are now mutually exclusive entities.

A documentary about Steve McQueen has been released into cinemas, and it concerns his passion for motor racing. It’s called Steve McQueen: The Man and Le Mans. The more you learn about the real McQueen, the more you see that his star persona has almost no subtext; what you see is what you get. His onscreen image is taciturn, defiant, and often monosyllabic. He was a dragged-up working class kid who developed into a maverick outsider, in films and outside of them. He was a reprobate and a marine before becoming a movie star. There was nothing to submerge; he was the red-blooded poster boy for ’60s machismo. It makes him the perfect star for a film like Sam Peckinpah’s The Getaway – a work reliant on that same unreconstructed machismo for which he was known in real life.

The Getaway is a lean Texas heist thriller that hangs its 10-gallon hat on McQueen’s sullen charms. Directed by Sam Peckinpah and adapted from Jim Thompson’s neo-noir source novel, it features McQueen as career criminal Doc McCoy. Doc’s wife Carol (Ali MacGraw) sleeps with a politically influential crime boss to parole him from prison; he’s then hired to helm a bank heist by the same man. After a series of double-crosses, the McCoys make off with the stolen cash and hit the road for Mexico.

During McQueen and MacGraw’s closest scrape, they are caught in a garbage compactor while evading the law. In the foul, hot wind of a remote landfill, the wayward pair are thrown from the back of a garbage truck, where they tumble to the ground like rag dolls. With filthy, torn clothes and cut faces, they climb into the remains of a junked Beatle, with MacGraw perched on what’s left of the backseat. It’s been a traumatising night, and Doc is tender in his gruff way. But when Carol tries to scratch at her cuts, he scoldingly slaps her hands away; she’ll get an infection.

It’s an emotionally restrained scene with a certain hard poeticism; softness beneath the irritation. Skin browned by Southwestern sun, they argue amid the wreckage of mobile Americana; garbage dumps, drive-thrus, and gas stations. The two stars share a blatant sexual chemistry, poised as they were to start a real-life love affair. They cut desolate figures on the arid, dusty Texas roads. It’s a stylish film – and I love it for that.

But the paternalism – and violence – that colours their relationship is overwhelming. We see it earlier when Doc first learns of his wife’s affair; he stops his car with a screeching halt and gives her a few open-handed slaps for good measure. It seems that in Peckinpah’s conception, even the most grounded women are susceptible to disloyalty. A good swat every now and then keeps them in line.

Worse still is the depiction of Sally Struthers’ character, Fran – simply a variation of Susan George’s betraying wife in Straw Dogs. She’s vacantly child-like and sexually provocative, with bouncy blonde locks and a propensity for violent men. The bullying dominance of rapists and sadistic criminals win the day with these women and their husbands stand little chance of competing. It’s the law of the jungle in Peckinpah’s world. These women crave sexist domination, and humiliate the civilised husbands they perceive as weaklings. It takes a man as virile as Steve McQueen to keep hold of a wayward wife. Remarkably, it’s one of the director’s less egregious offences in terms of anti-feminist backlash, and that’s a telling sentiment.

So, I can’t love The Getaway in any neatly explicable way. Even outside of gender politics, it’s often regarded as rote and disreputable commercial fare –  a throwaway work by a great film artist. But maybe that commerciality is key to what’s so appealing about the film? It papers the cracks with pure Hollywood fantasy, giving Peckinpah’s misanthropic worldview a more glamorous veneer. I go into it with the knowledge that it’s a ’70s heist movie starring Steve McQueen, and all those layers of star power and expectation make a strange buffer for the film’s limitations. It’s as if the film’s violence and skewed logic exist in a parallel movie universe. The Getaway is a tough film with a soft underbelly, offering a thoroughly conventional Hollywood conclusion. Whatever troublesome underlying attitudes it has are partially submerged by the outlaw romanticism of its ending.

It’s vital that we recognise onscreen misogyny in all its guises. Between domestic violence, clanging condescension and migraine-inducing stereotype, Peckinpah will never be the go-to auteur for a full-scale reconciliation between the sexes. But the sad truth of the matter is that to be both a feminist and a cinephile means to sometimes enjoy a film in spite of itself, and oneself. It’s a great feeling when the tension disappears and the two roles converge, and these days it’s happening all the more frequently. It’s worth striving for a time when being both movie lover and feminist doesn’t feel like an exercise in contradiction.

But the fact remains that films like The Getaway will always cause friction. Responses will vary as mood, context, and experience demand. For me, that response stands precariously between resentment and appreciation; they coexist uncomfortably side by side. I begin to realise that the best thing to do is to acknowledge the paradox. What happens when you love a movie that doesn’t love you back? You accept that its love is unrequited, and move on. But you can’t help but to have that spark of affection when you cross paths, often in spite of your own impulses.

Steve McQueen: The Man and Le Mans is released 20 November.