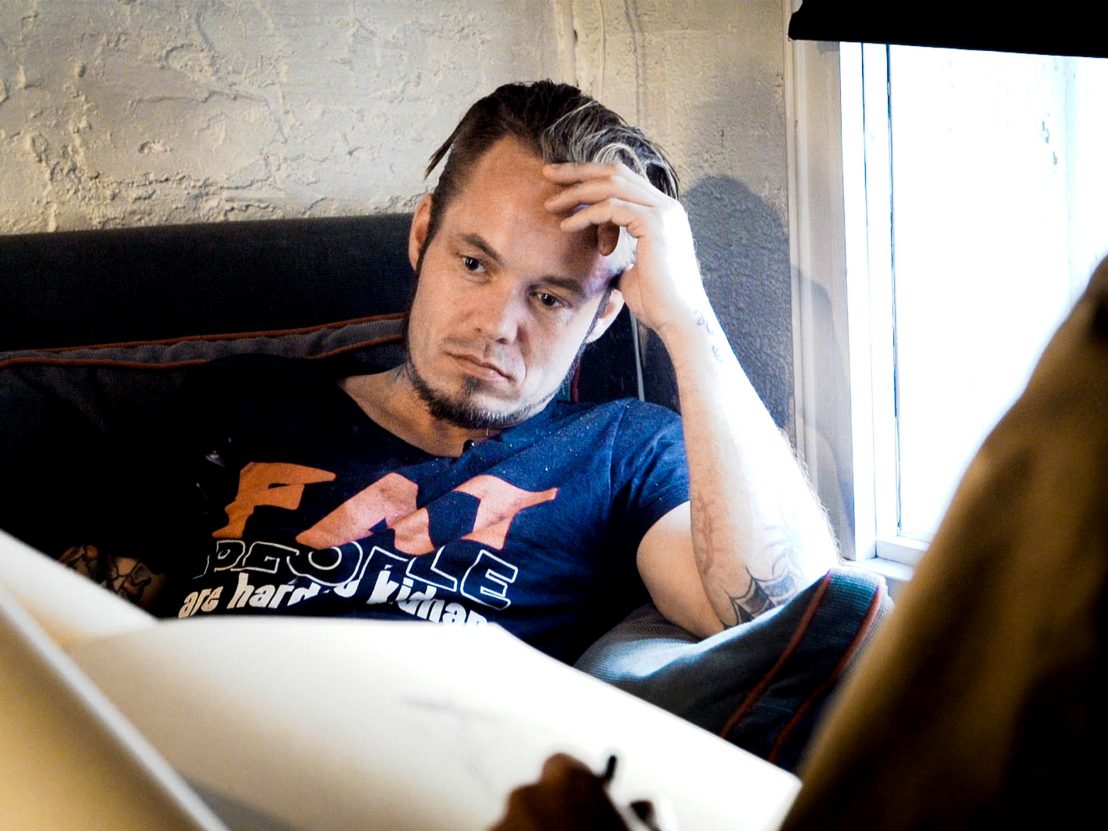 The seedy underbelly of the art world – whether it be forgery, theft or sex – is an irresistible and oft-used way of looking at marginalised and troubled souls. Then, of course, there’s the whole Banksy phenomenon, which has spawned a mini sub-genre of docs all of their own. What makes Benjamin Ree’s film about Oslo-based artist Barbora Kysilkova so intriguing and so fresh is its central premise: what if the victim turned on the perpetrator while in court and asked him to be her muse?

As odd as this may sound, the film shifts effortlessly from a potentially contrived affair to an unexpected, multi-layered journey of eye-opening discovery. Although Kysilkova doesn’t lose her frustration over her stolen work – she repeatedly asks Karl-Bertil Nordland of its whereabouts well into the piece – she finds she has more in common with the tattooed, drug-addled thief than first appears. Even more surprisingly, Nordland readily agrees to sit for her (and be constantly filmed), then seemingly wills the filmmakers to extract a visceral reality out of him that few, if any, have seen before.

Ree’s exceptionally well-crafted verité documentary was apparently shot over three years, and is neatly presented from different perspectives. We first experience the painter’s point of view, as her open-book fascination contrasts markedly with the awkward reticence of her subject. But it is the thief’s perspective that follows that is the real treat, and one that illuminates and informs far beyond expectation.

In fact, Nordland has quite the story to tell, with more than a little baggage to bear, coming as he does from a place of deep-seated pain. When Kysilkova shows him what she’s come up with on his first sitting, Nordland is inconsolable, unleashing a guttural response that’s haunting and heartbreaking. With a mutual trust established, an unlikely friendship between this most unlikely painter and muse develops. Kysilkova’s own dark story, vaguely referenced – she fled an abusive partner in her native Czech home – is writ large in her expressive canvases, albeit in more abstract terms.

The threat of a relapse with Nordland hovers over the piece like a dark cloud. When he does succumb, during an ill-fated trip to rehab with his girlfriend, things turn ugly. He gets his hands on a car and his self-confessed, self-destructive nature kicks in hard. A return to jail after he recovers from a near-death accident is inevitable. It’s almost a relief when he goes back inside to convalesce.

It’s difficult to imagine a scenario like this playing out in quite the same way in another part of the world. Norway and its surrounds are thought of being generally more inclusive, more egalitarian, at least on the surface. Even with all this, there lies a compelling story of a man who’s seemingly lost everything, who finds potential redemption in the most bizarre of circumstances.

There are plenty of unanswered questions and other conflict embedded within the piece. Kysilkova’s own relationship with her husband is only fleetingly referenced – they attend therapy, and only later does he offer some thoughts on camera on the problematic nature of the artist vs perpetrator dynamic. We also never know what the artist’s motives really lie, particularly when a delicious twist late in the piece throws everything up in the air.

But these only add to the non-linear joy of the film, which clearly and powerfully connects the painter with her muse in an arresting and unusual way. The results are breathtaking to watch.