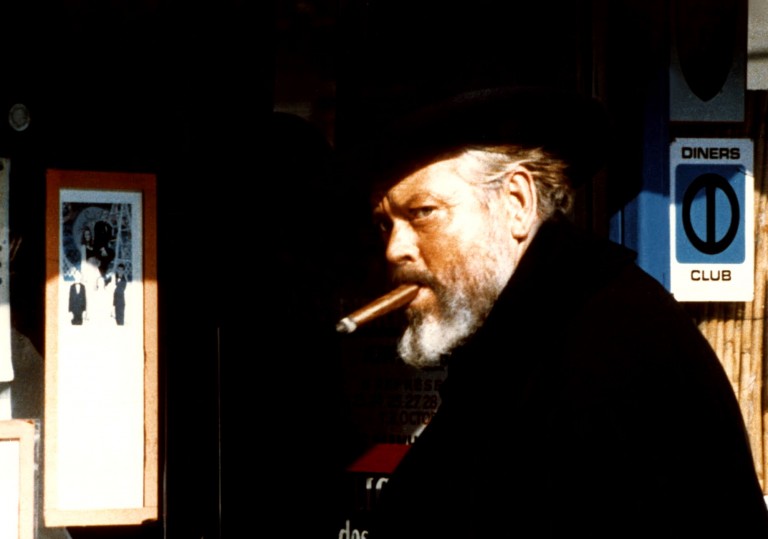 Wow. Our melon has been well and truly twisted. A very welcome re-release.

So rich, ripe and tricksy you’ll need to give this one multiple sweeps.

If Citizen Kane, The Magnificent Ambersons, Touch of Evil, The Trial and Chimes at Midnight are Orson Welles’ hearty and substantial cinematic plats principaux, then F for Fake is his devilish little after dinner digestif whose flavours are no less intense, complex and robust.

“Ladies and gentleman, by way of introduction, this is a film about trickery, fraud, about lies,” announces the ever-puckish Welles to camera as his jocular, fleet-footed film essay fires up. Of course, as much as it’s a film about trickery, fraud and lies, it is in itself a captivating riddle, reeling off a ripped-from-the-headlines yarn about Europe’s premiere fine art forger and employing it as a gaudy cover for its quickfire philosophical exploration into the mysteries of authorship and the worth of so-called ‘connoisseurs’.

Dovetailed with the account of monocled social gadfly, Elymr de Hory – a man who dashes off replica Modiglianis between breakfast and brunch – is the story of biographer Clifford Irving, whose book, Fake!, chronicled the life of Elmyr. Irving then went on to write a biography of Howard Hughes which, it transpired, was also a fake.

Now keep up here: Irving, Elmyr and Orson Welles come together in a luxury, booze-filled apartment in Ibiza, two career fakers and a self-described “charlatan” who professes to have made a film about lies and is doing his utmost to obfuscate the so-called ‘facts’ at every hairpin turn.

In a short documentary filmed for the DVD release of F for Fake, Chicago-based cinephile Jonathan Rosenbaum explains that Welles made this film as reaction to the “experts” who attempted to pigeonhole his style and keep score of his recurrent directorial tics. Strobe edits, throwaway camera trickery, smash-zooms, footage of Welles fumbling in the edit room, and a wry, literate narration all coalesce as an attempt to forge a new and original mode of modern storytelling. Just the editing alone is a thing of rare beauty.

If Welles larger-than-life persona weren’t so utterly integral to the conception of F for Fake, you’d be hard pressed to guess that it was his giant hand behind the tiller. But that’s kinda the point: Is Chartres Cathedral any less dazzling in light of the fact that no-one knows who built it? Indeed, you might see F for Fake as developing the notion of the modern film essay, in that by its final reels you come to realise Elmyr and Irving were mere pawns at the centre of Welles’ brain-teasing intellectual treatise.

Even at a trim 87 minutes, the film is so dense that you’ll need to give it multiple run-throughs to draw out all the details and references. At the same time, it’s arguably Welles most superficially enjoyable film, and even if you become totally confused by its intentions and intimations, you can still let the formal pyrotechnics wash over you with the help of Michel Legrand’s funtime big band Euro pop score.

Wow. Our melon has been well and truly twisted. A very welcome re-release.

So rich, ripe and tricksy you’ll need to give this one multiple sweeps.