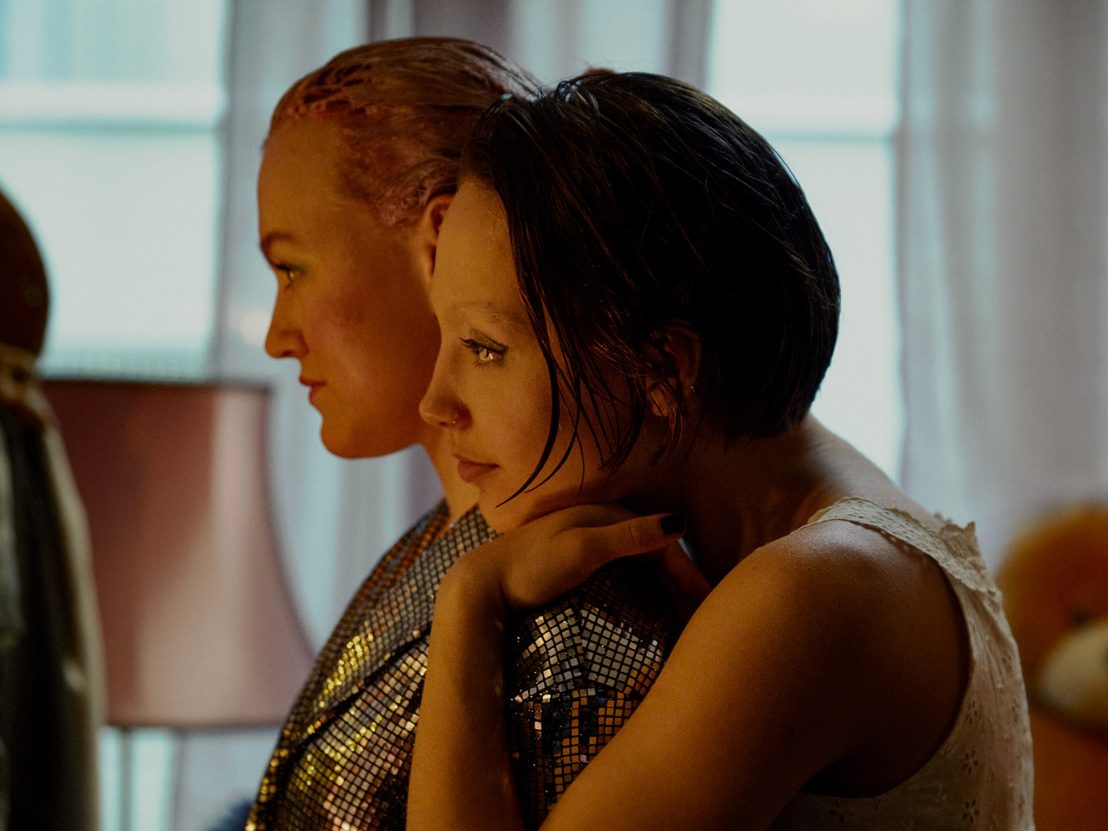 Alli Haapasalo creates an intimate coming-of-age story about two best friends on the cusp of adulthood.

Alli Haapasalo’s coming-of-ager is bound to receive plenty of comparisons to Booksmart. The resemblance isn’t empty; Girl Picture is also an intuitive portrait of two young women, joined at the hip, each in pursuit of their differing satisfaction of love and sex. Haapasalo’s film diverges, however, with its reach beyond the middle-class American experience with its striking plotting of adolescence and featuring of a lesbian sex scene that isn’t played for comedy.

Over the span of three consecutive Fridays, best friends for life – misfit Mimmi (Aamu Milonoff), with her bleach blonde eyebrows, and Rönkkö (Eleonoora Kauhanen), with her dirty blonde coiled curls – experience the highs and lows of young love in all its devastatingly beautiful glory. At their smoothie stall part-time job, the pair chop bananas while Rönkkö frets over her inability to enjoy sex. It is here they meet Emma (Linnea Leino), an ice skater brutally training for the European championships and whose icy gaze makes Mimmi weak at the knees.

Mimmi and Emma quickly fall head over heels into a thrilling new romance while Rönkkö’s eagerness for sexual experience has her venturing to parties with the indefatigable hope of finding a young man to hook up with. However, as Emma’s training amps up and Rönkkö’s sexual frustrations develop, Mimmi finds herself caught in a web of tension between lover and friend as each diverts on separate paths.

Energetic in its pacing, the elation of young infatuation is centred in cinematographer Jarmo Kiuru’s free-moving frame. Letting its young women exist playfully, Girl Picture is a refreshingly grounded portrait of formative femininity that strikes a careful balance between gritty aesthetics and sincere portrayal. At once Girl Picture is Mimmi’s romantic drama, Rönkkö’s coming-of-ager, and Emma’s sports thriller. The balancing act is well distributed if only a tad skewed towards Emma and Mimmi’s burgeoning romance leaving Rönkkö’s navigation of sexual pleasure slightly rushed.

In one scene, the burning red of Emma’s brake lights floods an empty car park as the ice-skater demonstrates her routine on the tarmac. Mimmi stares utterly spellbound. Emma’s elegance and Mimmi’s wonder makes for a touchingly sweet moment then a needle drop of Perfume Genius’ ‘Slip Away’ (which is becoming the de facto soundtrack for coming-of-age films) kicks in and if you weren’t in love, you are now.

The tender romance of adolescent women friendship is also beautifully penned in Daniela Hakulinen and Ilona Ahti’s script; sitting in each other’s laps, half-dressed and nose to nose Mimmi and Rönkkö delicately draw eyeliner on one another discussing sex without filter or embarrassment. Access to these private moments of connection is granted with the film’s earnest treatment of young women’s sexuality that doesn’t become sidetracked by glossy visuals.

Navigating the influx of adrenaline and oxytocin surging through these young women, all three actors are exquisite. Aamu Milonoff, in particular, executes an uninhibited but intricately expressive performance. With her bob cut framing her face, Milonoff allows adoration to shine through her eyes so feverishly. Corraling coming-of-age cliches into a pen and locking the gate, Haapasalo’s addition to the young adult canon is remarkably fresh, queer and a lovable account of adolescence.