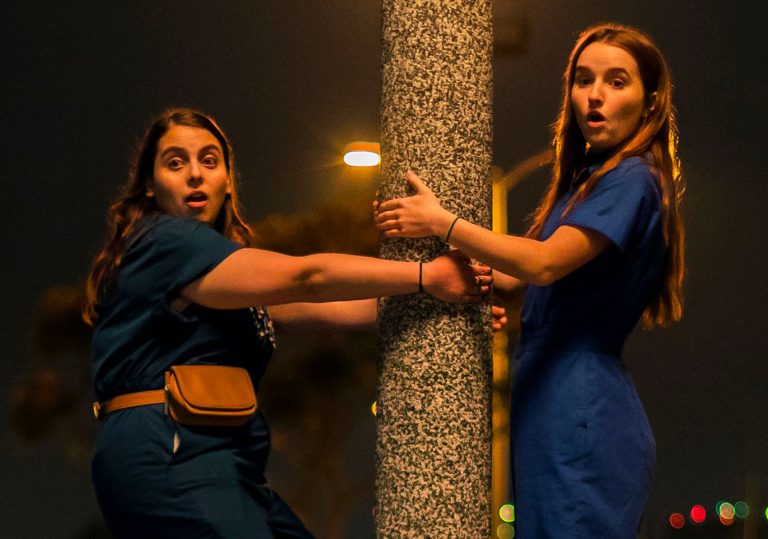 Riotously funny with charm to spare.

A solid debut for Wilde, but really puts Dever and Feldstein on the map.

Increasingly it feels as if we’re living in the golden age of teen movies. Forget The Breakfast Club and cast aside Bring It On: in the past few years alone we’ve been blessed with vital additions to the canon, from The Edge of Seventeen to Blockers to Eighth Grade. Now comes another entry to the hall of fame: the effortlessly charming directorial debut from Olivia Wilde.

When Booksmart premiered at South by Southwest in March, audiences were quick to laud it as a female version of Superbad (a comparison made even easier by the presence of Jonah Hill’s little sister Beanie Feldstein). Such associations are easy to make and probably inevitable in a subgenre as saturated as the teen movie. Although some of the humour in Superbad hasn’t aged well, it’s true that both films have something pure at their heart: the beauty and intricacy of adolescent friendship.

While Superbad had Seth and Evan, Booksmart has Molly (Beanie Feldstein) and Amy (Kaitlyn Dever). The two are in their final few days of senior year at a seemingly well-to-do Los Angeles high school, where they’ve spent the past four years courting academic success in order to get into good colleges. For Molly this means a coveted place at Yale; for Amy, Columbia (after she spends a summer in Botswana teaching women how to make their own tampons).

They are, for all intents and purposes, Big Nerds, who treat their less studious classmates with casual disdain, but there’s no sense that their academics have made Molly and Amy outcasts; in fact, their alienation from their classmates is all of their own making. Hurtling towards graduation, the pair become aware that their rigorous pursuit of grades has come at the cost of a good time, while all their classmates have achieved a balance between perfect SAT scores and having a life outside of the classroom. There is, of course, only one thing for it: Molly and Amy need to party.

The night before graduation, they embark on a simple mission: attend the big party thrown by the most popular boy in their year, and throw off the shackles of geekdom once and for all. It’s a simple enough conceit, but Booksmart’s strength lies in its earnest familiarity, and determination to prove you don’t have to reinvent the wheel for a film to work.

As Molly and Amy, Beanie and Kaitlyn have a natural, easy chemistry; we buy into their friendship wholesale, and Feldstein builds on her standout supporting performance in Lady Bird to prove she’s becoming one of the most exciting young actors in Hollywood today. Even supporting casting choices are pitch-perfect: Will Forte and Lisa Kudrow are hysterical as Amy’s supportive parents, while Molly and Amy’s classmates avoid becoming high school stereotypes thanks to the absorbing energy each actor brings to their supporting role. Standouts have to be Billie Lourd as Gigi, Noah Galvin as George, and Skylar Gisondo as Jared.

Of course, there’s no escaping the fact Booksmart is about a very narrow teenage experience, and the white, upper-middle-class lens is, particularly on repeat watches, noticeable. The implication of a student-teacher relationship also feels strangely pitched in 2019, even though we’re encouraged to laugh. While this doesn’t prevent Booksmart being riotously funny and charming in its sincerity, these flaws are worth keeping in mind, particularly when Booksmart does so much so well.

There aren’t many studio films which take such an enlightened view to something which mainstream media still seems to struggle to wrap its head around. It’s evident that so much love and thought has gone into Booksmart, from its profound sense of empathy for each of its characters to the carefully curated soundtrack, a hot contender for best of the year. Into the fine canon of pool party scenes goes a stand-out in Booksmart, soundtracked to Perfume Genius’ ‘Slip Away’, and the sight of Kaitlyn Dever and Noah Galvin belting out ‘You Oughta Know’ sits alongside Cameron Post’s ‘What’s Up?’ in a new genre of lesbian empowerment.

As Mean Girls was for teenage girls some 15 years ago, Booksmart feels like a watershed moment for the next generation. It’s so sure of itself and so full of the boundless possibility of youth. Whether you’re a teenager now or were a long time ago, this film makes you realise how important those formative years and friendships are, no matter where you end up.

Riotously funny with charm to spare.

A solid debut for Wilde, but really puts Dever and Feldstein on the map.