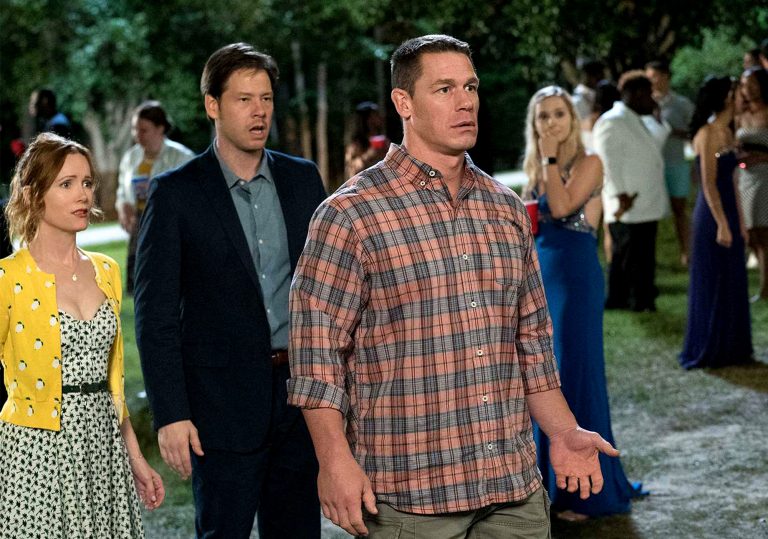 What a fun, moving and pleasant surprise!

Big laughs and big heart are the ingredients that lift this ribald teen sex comedy above the pack.

Three parents pose enthusiastically while their embarrassed teen daughters roll their eyes on the movie poster. ‘Parents can be such… Blockers’, it reads, the silhouette of a cockerel smacked in the gap. Yes, we get it. What is less easy to get, however, is why Kay Cannon’s latest film seems intent on doing itself such a disservice. The film’s name and advertising campaign bears all the hallmarks of a mawkish frat pack comedy, but in fact Blockers is a sharp-witted story about three girls coming of age and their parents who are struggle to let go.

Lesley Mann stars as Lisa, the overbearing single mother of Julie (Kathryn Newton), who is unable to handle her daughter’s impending move to college. Julie’s best friends Sam (Gideon Adlon) and Kayla (Geraldine Viswanathan) have their own family issues. Sam is wedged between her mum (June Diane Raphael), her stepdad (Hannibal Buress, in a brief but brilliant role) and her estranged father Hunter (Ike Barinholtz). Kayla, meanwhile, is coddled by her affectionate, overly emotional dad, Mitchell (John Cena), whose paranoia far outweighs her mother’s (Sarayu Rao) liberal attitude. When the parents discover that the girls have made a pact to lose their virginity on prom night, Lisa, Hunter and Mitchell rally together to, ahem, cock block their their own children.

Blockers offers a hilarious and thought-provoking cocktail of different views on sexual blossoming, and scriptwriters Brian and Jim Kehoe deliver laugh-a-minute comic dialogue without losing sight of the film’s simple premise; that raising a daughter is both a joy and a nightmare that’s riddled with anxieties. There are some great age-gap gags as the parents attempt to navigate the confusing worlds of their millennial offspring, which escalate into some wince-worthy escapades including naked strangers in blindfolds and an incident involving a beer keg. And yet there is real tearjerking sense of empathy behind each of these young women’s stories – to the extent that you’ll want to hug your parents tight next time you see them.

With a mix of families who each harbour distinctive attitudes about how to bring up a child, the film offers an unexpected examination of female sexuality from the perspective of different genders, sexualities and cultures. It is a little overstretched, with an extended vomiting scene that could have hit the cutting room floor, but it is worth the price of admission for the humour and heart delivered by a stellar ensemble. Look out for some smart movie references, committed physical comedy and a very moving father-daughter interlude.

What a fun, moving and pleasant surprise!