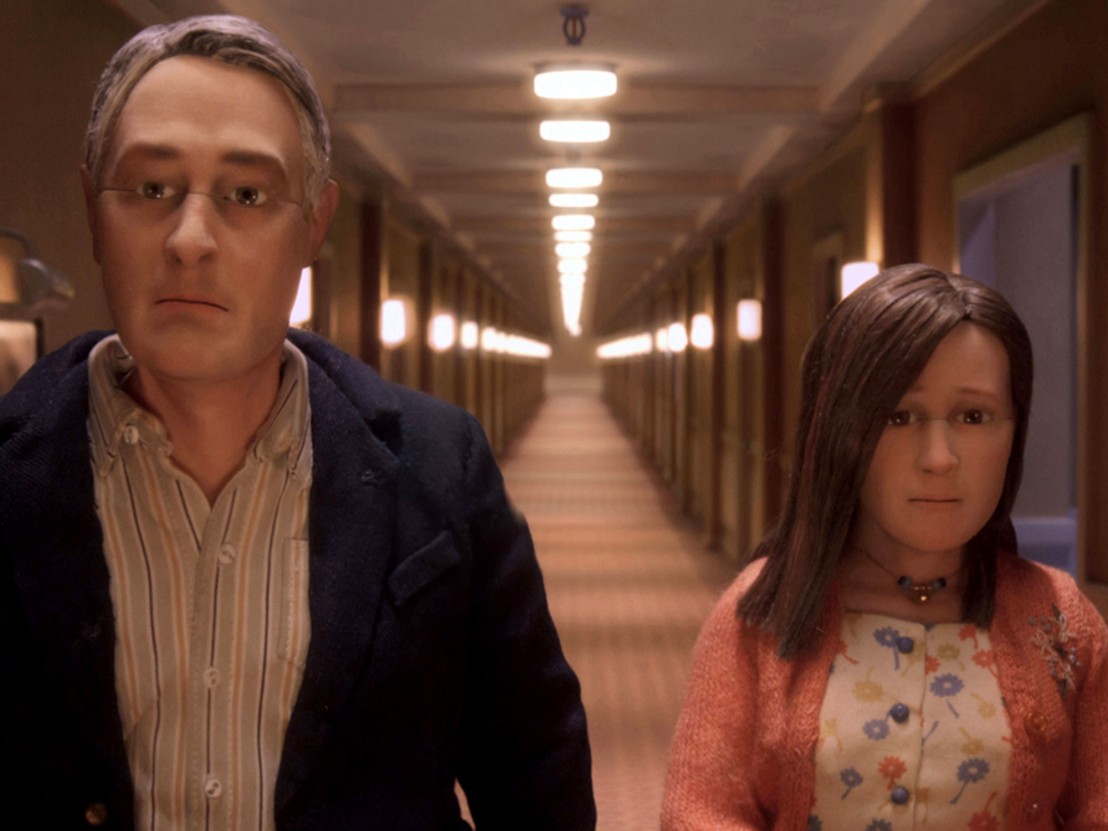 The master of misanthropy returns with a superb, quasi-animated feature on the nature of empathy.

An animated but crushingly real exploration of how empathy is our only escape from ourselves, Charlie Kaufman’s first directorial outing since 2008’s Synecdoche, New York begins inside a storm cloud of swirling voices, eventually emerging to isolate that of a single man.

His name is Michael Stone (David Thewlis, delivering one of cinema’s best bodiless performances), and his face – which boasts prominent seams along his sideburns and appears to be made of hard felt – is pressed against the window of an airplane as it makes its descent towards the Cincinnati airport. He has a wife, he has a tearstained letter from another woman, and he has a British accent. The stranger in the seat next to him, a nervous flier who reflexively clutches Michael’s hand during landing, may also have some of those things. Or none. We’ll never know, because Michael never cares to ask. And why should he?

It’s the same story with the cab driver who schleps our bedraggled hero towards his gauche downtown hotel, proudly orating to his passenger about the city’s hottest tourist spots. Michael insists he’s only in town for one night, but that doesn’t stop the cabbie from proselytising about the local zoo (“It’s zoo-size!”). The cabbie probably had a first kiss, or maybe a traumatic childhood memory. He definitely has a morning routine.

For Michael, who isn’t unkind to strangers, the chatty man in the front seat means little more than his utility. His voice blends in with those of all the other single-serving people who will never mean anything to him, in part because all of the film’s supporting characters – male or female – are performed by Tom Noonan. Each of the film’s phone calls begins with Michael reflexively (optimistically?) saying “It’s nice to hear your voice,” but the voice on the other end of the line is always the same.

By the time Michael is forced to contend with the unnervingly robotic porter who shows him to his room, Anomalisa begins to feel like a feature-length riff on the sequence from Being John Malkovich in which the actor enters a portal into his own mind and finds himself surrounded by people who are at once both perfectly identical and strangely alien. This being a Charlie Kaufman script, the purpose of Michael’s visit is naturally provoking a mordant irony: A legend of the customer service industry, he’s flown to Ohio for a speaking gig tied to his recently published business bible, How Can You Help Them? (The rabidness of his fans, who think of him as a celebrity god of sex, is milked for some of the story’s biggest laughs).

The Invasion of the Body Snatchers vibe is aided immeasurably by the fact that the film’s world is entirely populated by stop-motion puppets whose faces seem glued to their heads like masks. The credit here belongs to co-director Duke Johnson, an animation wizard whose work includes the likes of Mary Shelley’s Frankenhole (a project with which this reviewer is totally familiar, and not just citing here with a Trebek-ian pretense of knowledge).

As Michael navigates a nearly photorealistic world that’s been designed from the details out (no film has ever been so keenly attuned to the Lynchian horrors of a swank hotel, from the frustrations of a keycard to the food buttons on the phone), it’s easy to forget that he isn’t made of flesh and blood. The secret is in his movements: he walks through the endless hotel hallways like a man in the early stages of a nightmare, almost floating. The effect is wonderfully discombobulating, the movie both immersive and always just tilted enough that you can afford to stop questioning the surface of what you’re seeing.

And just when you think you have the lay of the land, chaos is introduced in the form of an excitable brunette with pink streaks in the hair that she matts over her subtly deformed right eye. Her name is Lisa (Jennifer Jason Leigh), and – for whatever reason – her voice sounds unique to Michael. A stilted romance soon blossoms between the married traveler and the shy introvert he convinces is worthy of his affection, and fans of Eternal Sunshine of the Spotless Mind will feel right at home with the cringe-inducing candidness and sudden jolts of passion that define the affair.

Set in 2005, perhaps in order for the story to anticipate the age of social media further confusing our sense of personhood, Anomalisa is, for all of its hilarious weirdness, a profoundly unifying experience – Michael, so trapped in his shell, is never more one with the world than when he glumly confesses that he “Might have psychological problems.” Kaufman’s gift for mining shared experiences from private torments makes this movie as honest and unique a heartbreaker as any he’s previously written or directed. Who else could manage to wring tears (among other fluids) from an amputated Japanese sex doll? Who else would try?

Charlie Kaufman is back. It’s good to hear his voice.