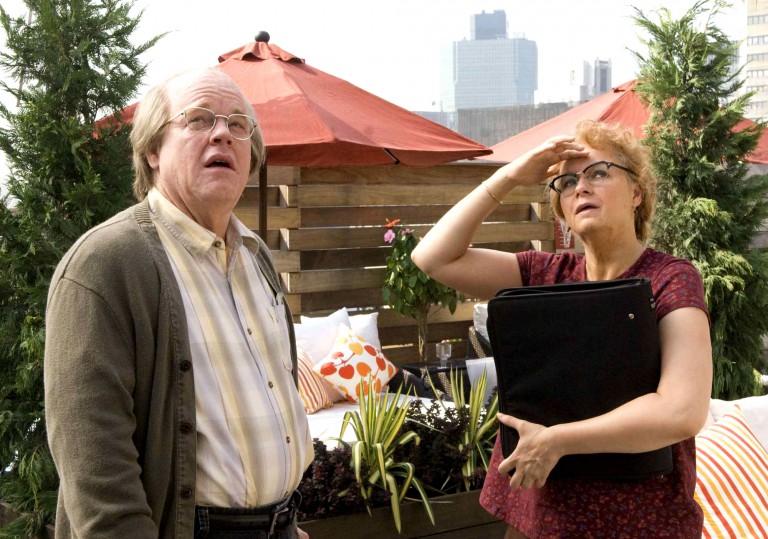 Kaufman is a unique voice, albeit one that can be hard to decipher. And he’s untested behind the camera.

Absolutely demands to be churned over and considered at length. Will lend itself to multiple screenings – if you can face them.

But somewhere inside the hyper-awareness, the metaphors, the in-jokes, the sly smarts and clever quirks is a real film. An ambitious and strange and beautiful film of bold but elusive truths.

Caden Cotard (Philip Seymour Hoffman) is a theatre director and hypochondriac. His wife, Adele (Catherine Keener), has left him to purse her career as an artist in Berlin, taking their daughter, Olive, and her friend Maria (Jennifer Jason Leigh). After a failed affair with his assistant, Hazel (Samantha Morton), Caden takes his troop to a vast warehouse in New York to work on a piece of art that will “stare truth in the face”.

This is barely to scratch the surface of a film whose structure is at once as self-contained as a Russian doll, and as free form as a fever dream. Its nearest contemporary is Harmony Korine’s Mister Lonely, but a better reference point might be Lynch’s Mulholland Drive. While it’s not as dark as that nightmare, Synecdoche is powered by the same kind of rigorous intelligence and uncompromising vision.

But a vision of what, exactly? This is a film that doesn’t yield its secrets easily. Instead, they’re buried somewhere beneath, or perhaps within, the meta-textual layers stretched across this strange, sprawling canvas.

Kaufman is obsessed with the power of artifice. And it’s not just that giant model city – the film is full of odd and arresting details that invite then defy explanation. Look closely, and Kaufman’s chronology is as cracked and splintered as his futuristic city streets. A Zeppelin is rendered in all-too-obvious CGI.

But just as you’re beginning to lose yourself completely in this world of actors, fakes and facsimile, the artifice begins to assume its own kind of truth. When there are so many acts of invention, the difference between the ‘real’ and the ‘unreal’ eventually shades into nothingness.

Whatever you make of it, you have to admire Kaufman’s bold, boundless ambition. Is Synecdoche the story of a man losing his grip on reality, or finding his place in it for the first time? Is it about a decline into madness? Or is it a blind leap into the unknown and unknowable depths of the soul?

Certainly, it’s a film that keeps itself at a distance, and that makes it difficult to respond to on an emotional as well as an intellectual level. Anxious and jittery, Kaufman’s direction is consistent with his writing. Scenes are short and restless; dialogue is packed tight together, spat out of the mouth like rotten fruit.

Some people will hate it, and those people will be impossible to persuade. But all art is vanity. To harangue any filmmaker for self-indulgence doesn’t make sense. “You never really looked at yourself,” says Hazel to Caden. But Charlie Kaufman did. In Synecdoche he’s looked at himself, at life and at death long and hard and honestly. And he deserves to be indulged.

Kaufman is a unique voice, albeit one that can be hard to decipher. And he’s untested behind the camera.

Absolutely demands to be churned over and considered at length. Will lend itself to multiple screenings – if you can face them.