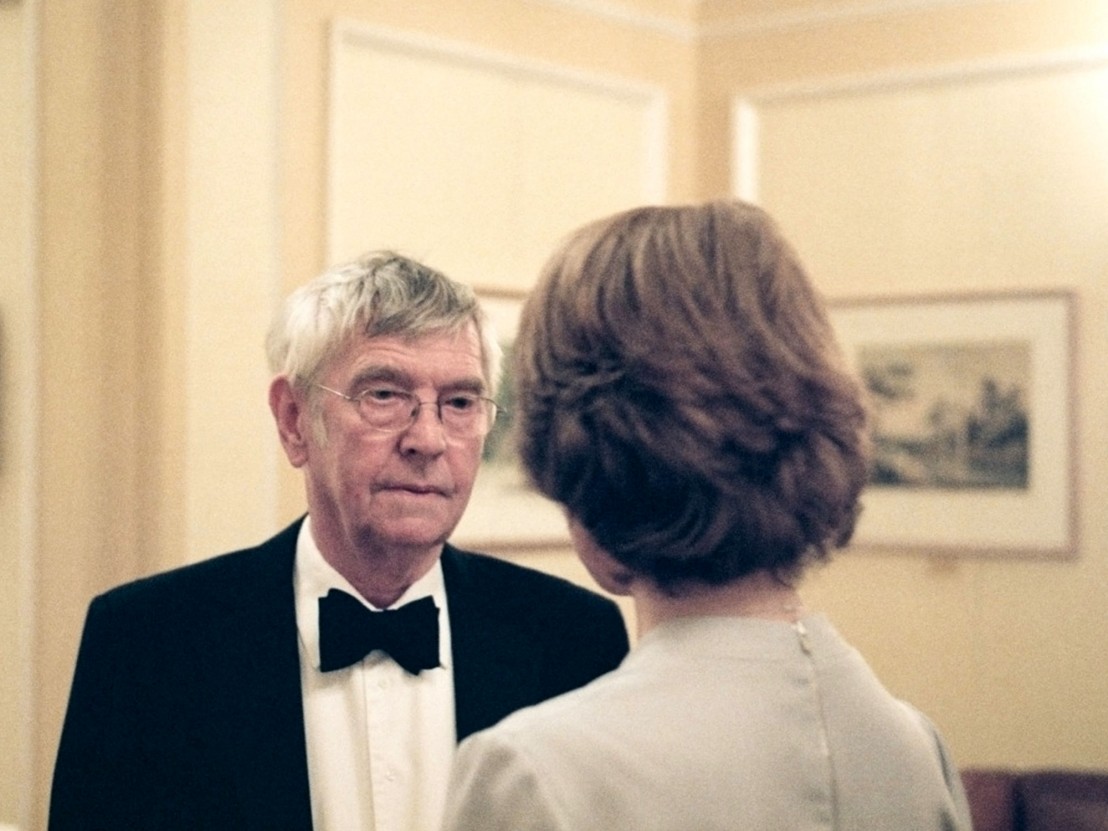 When 45 Years premiered at 2015 Berlin Film Festival, the advance press sold the lead couple as a progressive cinematic vision of being in your sixties and seventies. Lines like: “They read Kierkegaard and still have sex!” conjured images of humans who have entered a hallowed zone with all of the wisdom of age and none of its libidinal mellowing.

The line about Kierkegaard and sex is not quite right on either account. Kate gently teases Geoff for having so many copies of a book that he’s never completed. He’s built a life containing items that have not been fully metabolised into his identity. The Kierkegaard book signifies aspiration rather than reality.

Likewise, the sex scene is another case of ‘almost ran’. Yet, if the characters don’t climax, at least one of the film’s arcs does. Kate and Geoff’s trip to their bedroom is preceded by a cosy nostalgia session downstairs. The film opens with Geoff receiving a letter in German notifying him that the body of a long-dead ex-girlfriend has been discovered, preserved in ice. Since that moment, he has been distracted – not fully in the world that contains his wife. When the nostalgic patter begins, and he remembers meeting Kate in Leeds (“You were a knockout”) and finally, he is back. He sees her, he loves her, he cherishes her, and he wants to go to bed with her.

From Kate’s point of view, it is a relief to have her husband back with her and in sync with their lives. Although director Andrew Haigh presents two very balanced characters (and the bods at Berlinale kept the scales even – giving Charlotte Rampling and Tom Courtenay silver bears for Best Actress and Best Actor respectively) the camera’s perspective ever so slightly sides with Kate. We have stayed with her in the practical, physical world as she walks the dog and makes arrangements for their 45th wedding anniversary. We have worried about Geoff’s brooding. We have wanted him to come back to us. So when he returns down the tightrope of shared memories and propositions Kate, we indulge him with joyful relief and go upstairs.

Andrew Haigh spoke to us about the empathy he has for his characters. Tom Courtenay and Charlotte Rampling meet and match his ideology and create a tender moment for the cinematic ages. A topless Geoff beats his chest while growling at Kate. She looks at him with love. The gesture would be comical on a lean younger man. For the bloated, slightly ramshackle older Geoff, it is goofy sweetness personified. Kate’s adoring reaction proves how right for one another they are, right now, in this funny pre-coital moment.

It’s a highlight before a tailspin. This couple – particularly Geoff– have the capacity to absent-mindedly induce great lashings of hurt. Yet when the lights are on behind both their eyes, they are capable of exquisite personal shorthand that speaks, not just of one second, but of all the seconds that led up to it – in short, of their whole life together. It is wondrous for a director to create a scene in which the watching audience gets a sense of the chemistry that has powered a couple for decades of cohabitation. One can imagine a younger Geoff performing the same move way back into the past and an older Geoff performing the same move far into the future, with wildly different measures of success. Kate and Geoff’s relationship has momentum and nuance. It’s so full that it fills not only a feature film but – for the fanciful and captivated – it ripples out into the ether.

There is so much that has been built between them. There is so much to lose in their coming apart from one another. This potential loss is the tension that underpins the film. Geoff loses his erection and the distances between their reactions is telling. She doesn’t mind. She enjoyed the ride. Now it’s over – she just wants to enjoy him. Geoff is deflated. He couldn’t perform in the present and so floats back on memory to the past. They were together and now they are apart. What could have been one type of little death becomes a more poignant but equally messy one.