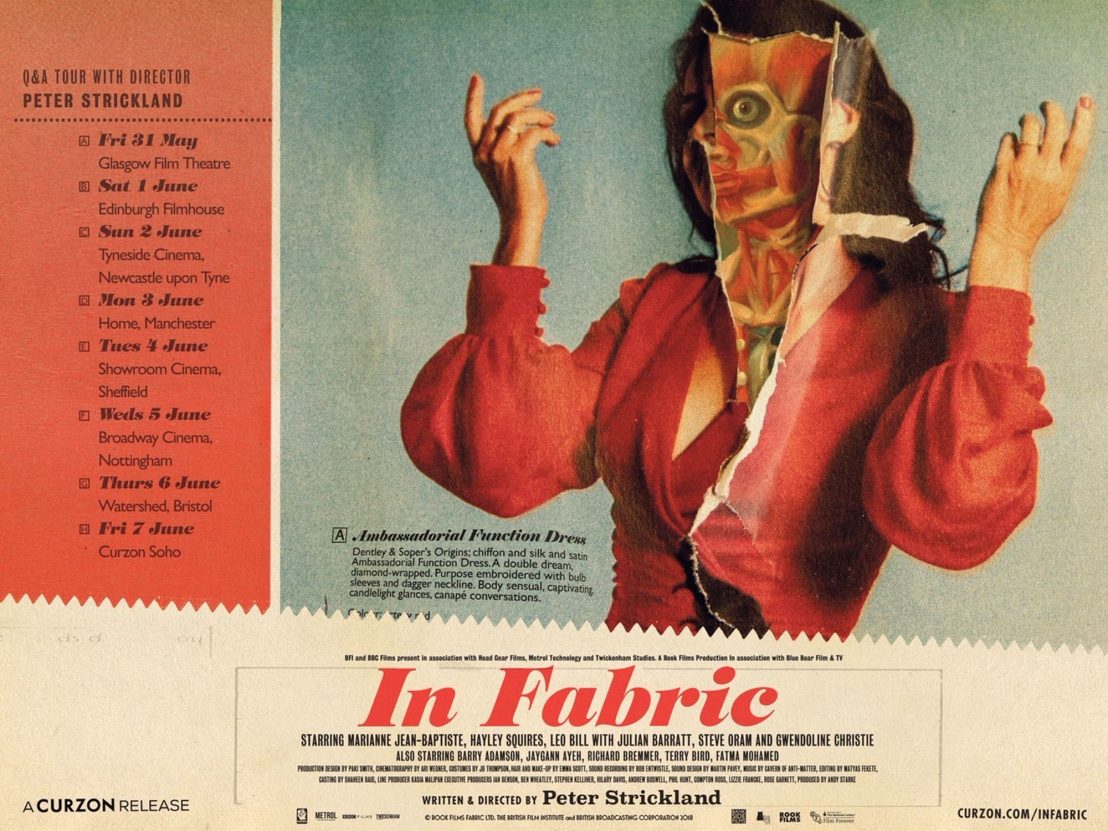 As the year crawls to an end, we’re looking back at the finest posters from the past 12 months. From the illustrated to the comedic, these are our favourite bits of movie marketing. Think we’ve missed one? Let us known by tweeting us @LWLies. 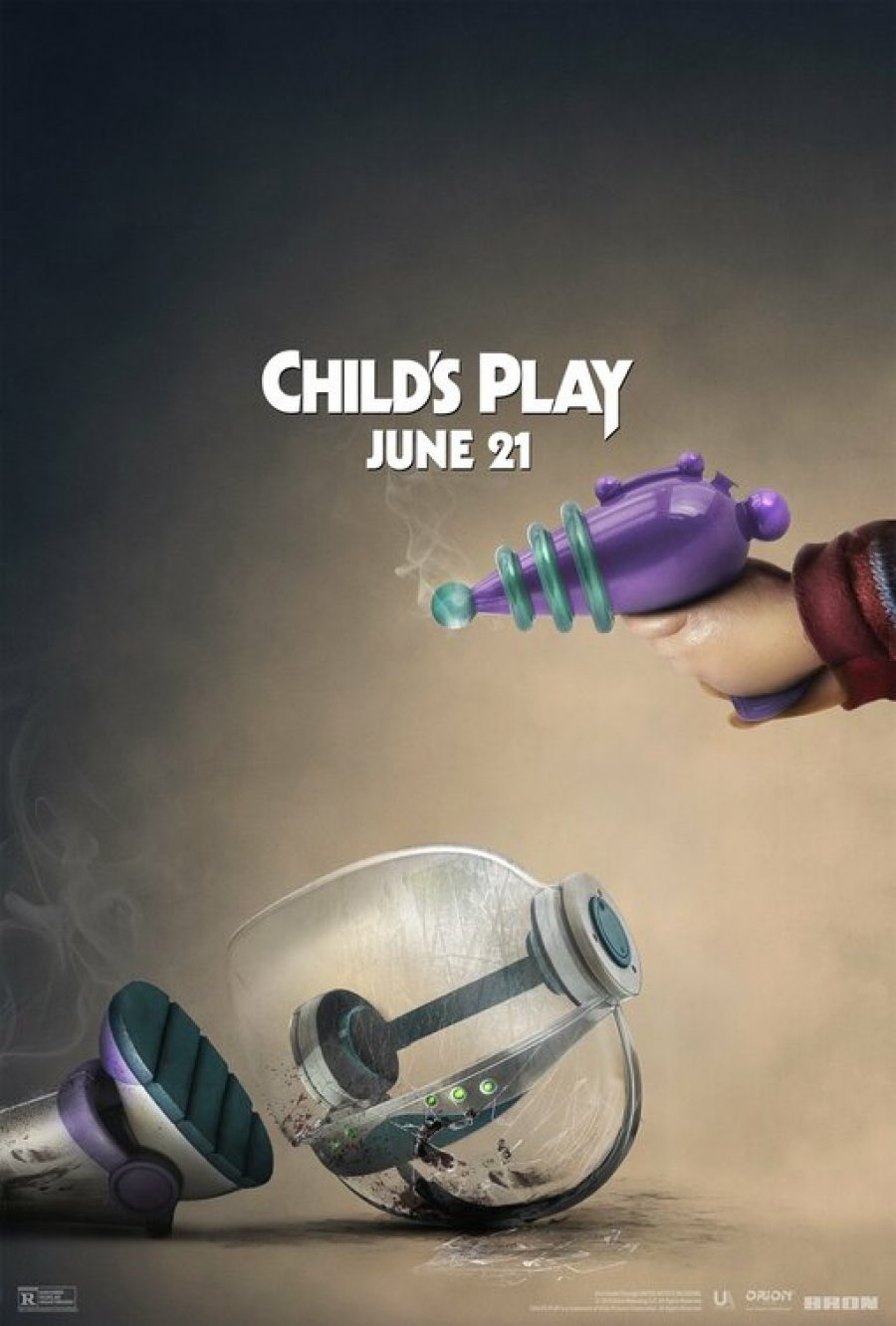 Although the reboot of Don Mancini’s killer franchise wasn’t exactly a hit, this series of posters – riffing on the Toy Story 4 teasers – were creative and amusing. It’s a shame the film itself couldn’t deliver on either the shocks or the laughs. 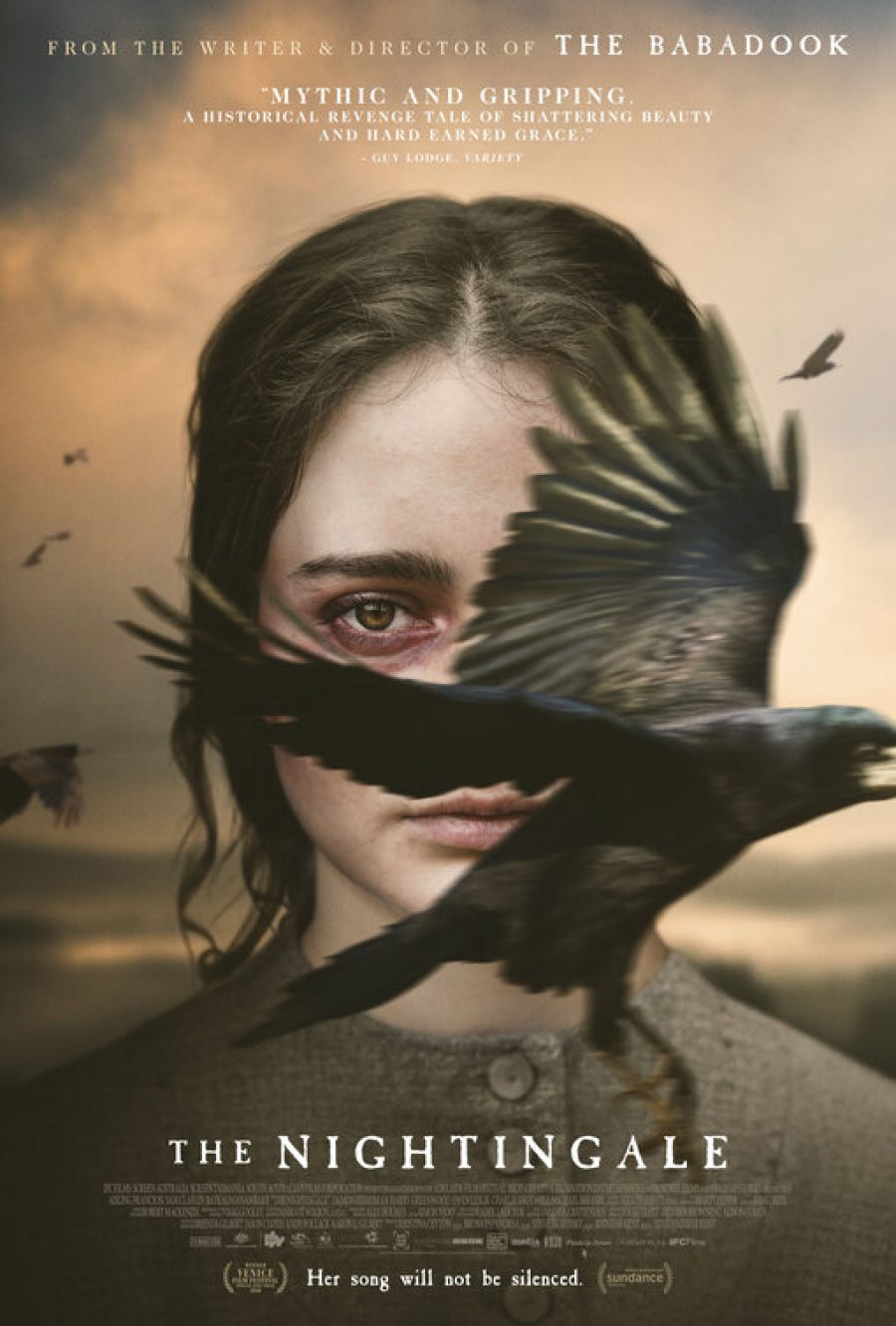 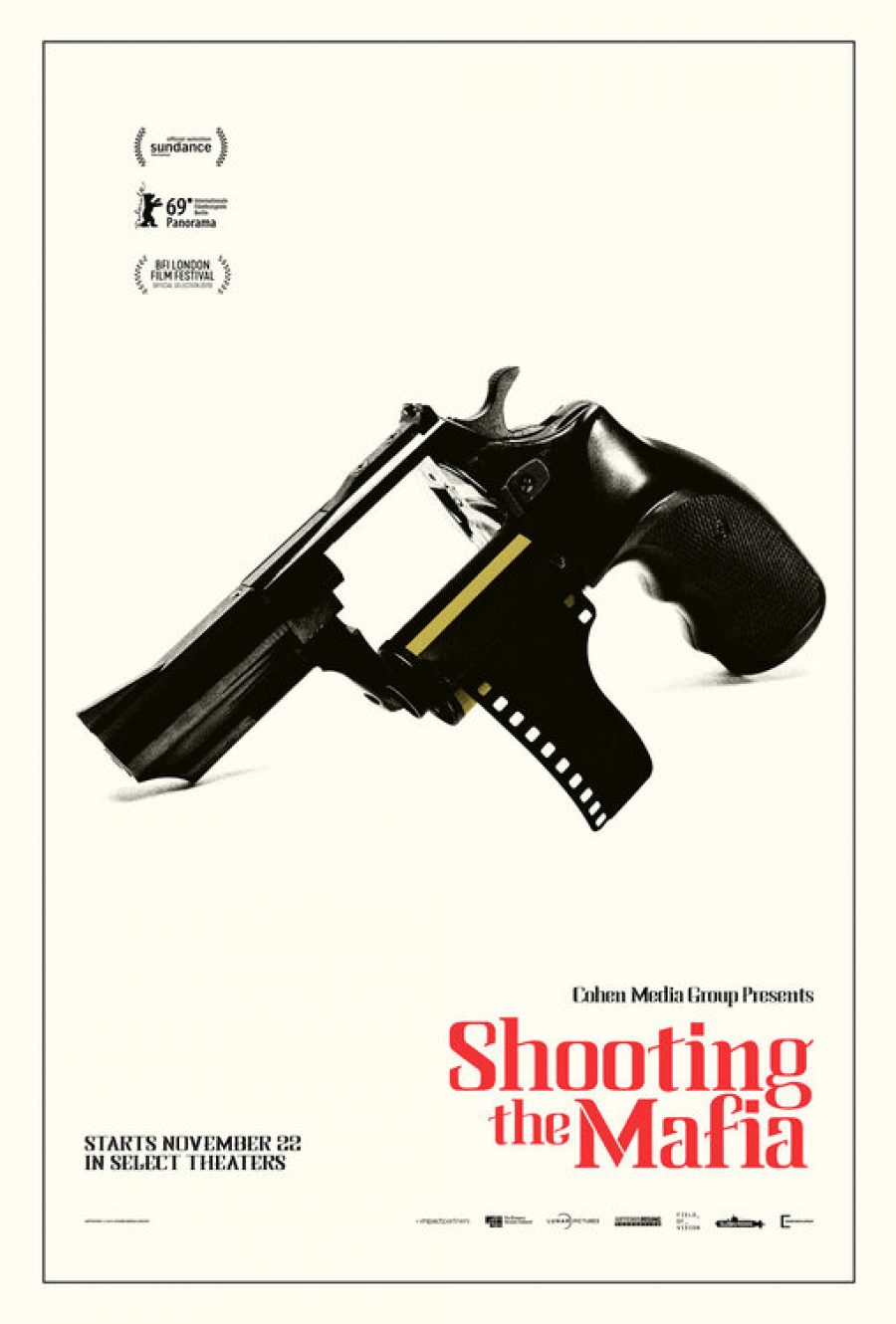 Sometimes a visual joke can look a little tacky, but in the poster for Kim Loginotto’s documentary about photographer Letizia Battaglia, it works because of the otherwise sparse surroundings. The little touch of red for the title – in a font that nods to Francis Ford Coppola’s The Godfather – ties it all together. 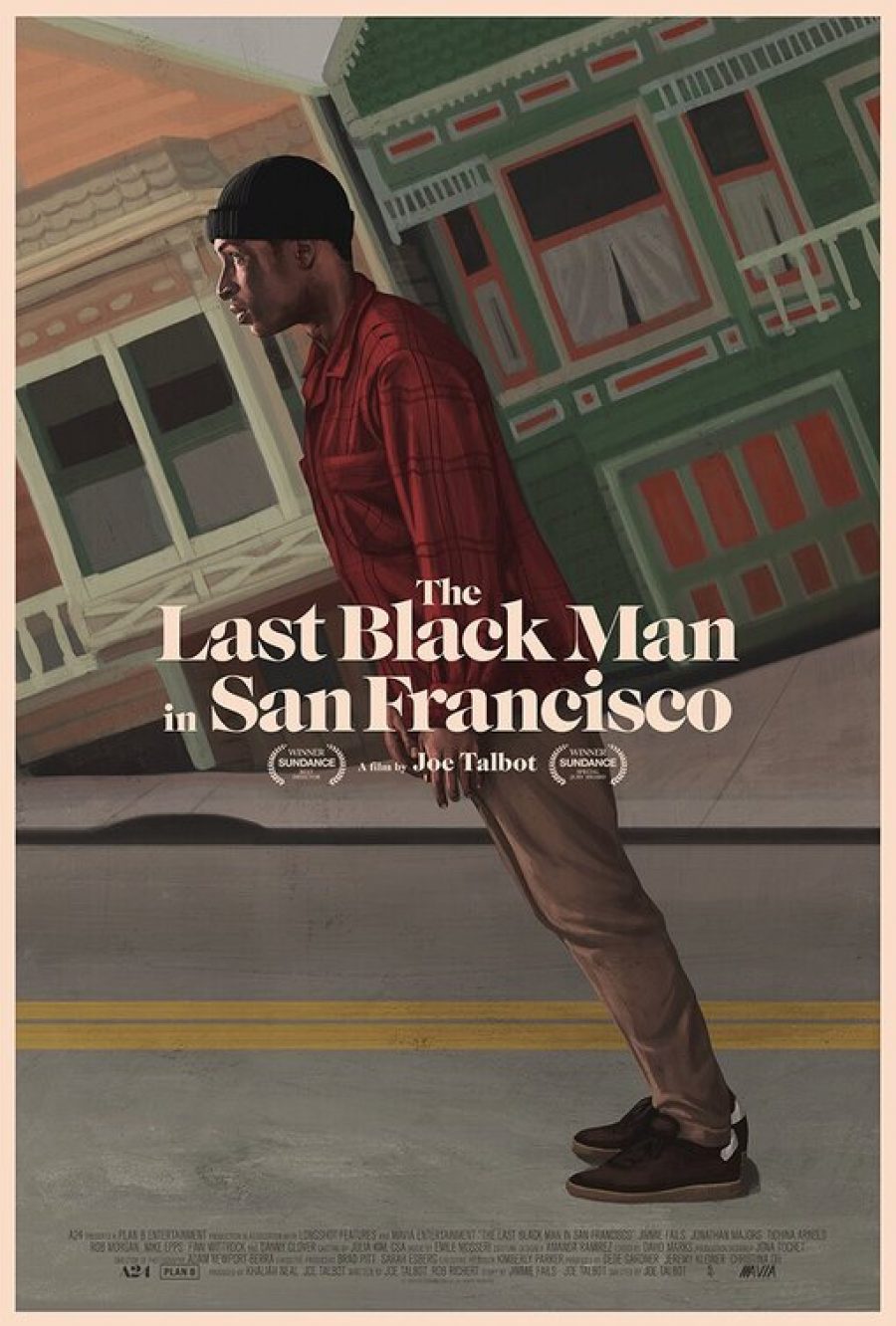 Two of Akiko’s designs made our top 20 this year, with good reason. This poster for Joe Talbot’s drama exploring gentrification and race in San Francisco sees lead actor (and the inspiration for the story) Jimmie Fails standing on the street by the house he’s desperate to reclaim. It really feels like a whole lot of love went into this one. 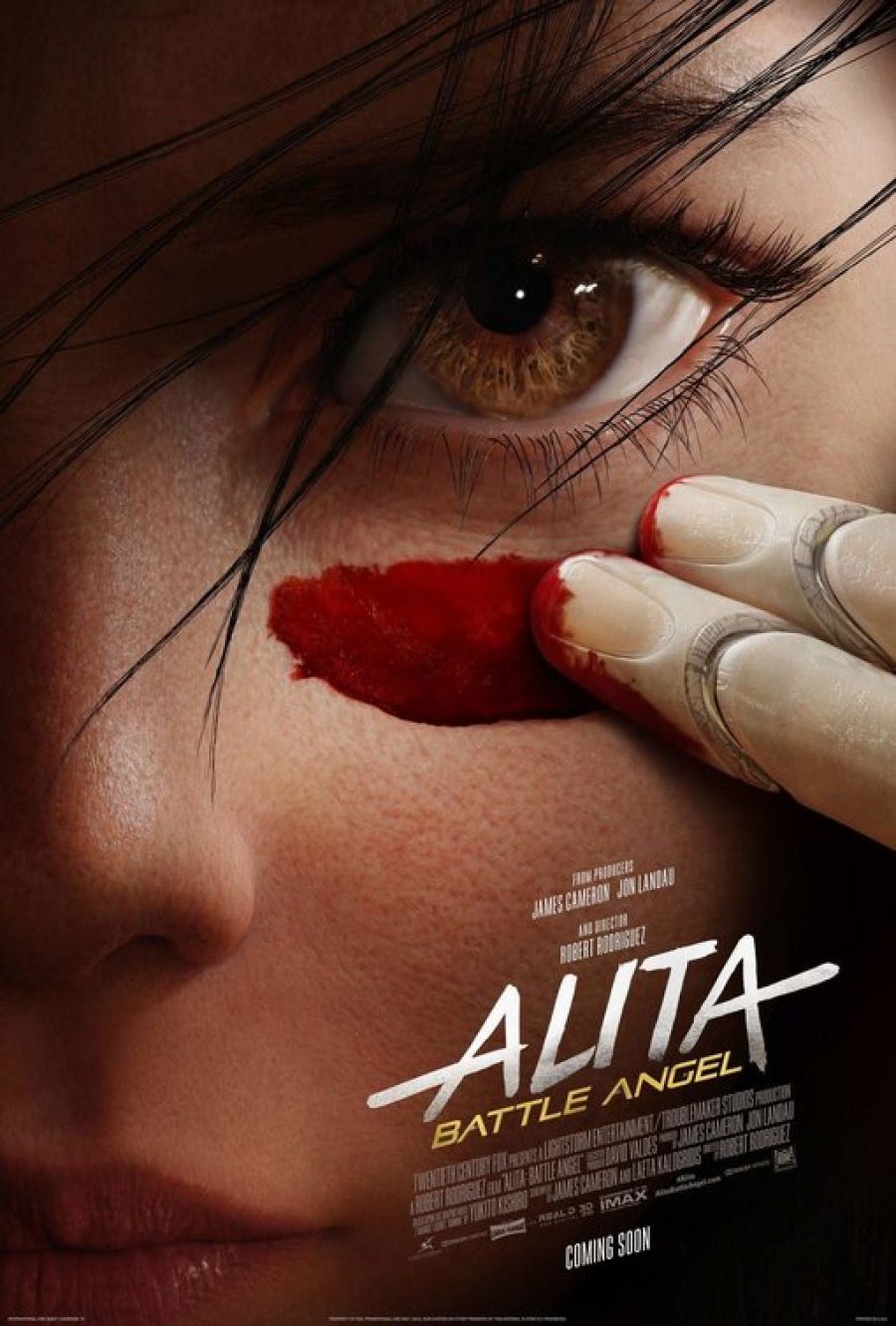 After years of trying, James Cameron finally brought Yukito Kishiro’s manga Gunnm to the big screen this year, care of director Robert Rodriguez. Alita: Battle Angel has its fair share of ardent fans, and this poster is definitely one of the better blockbuster offerings this year – the swipe of blood on Rose Salazar’s cheek hints at one of the film’s most brutal (and brilliant) scenes. 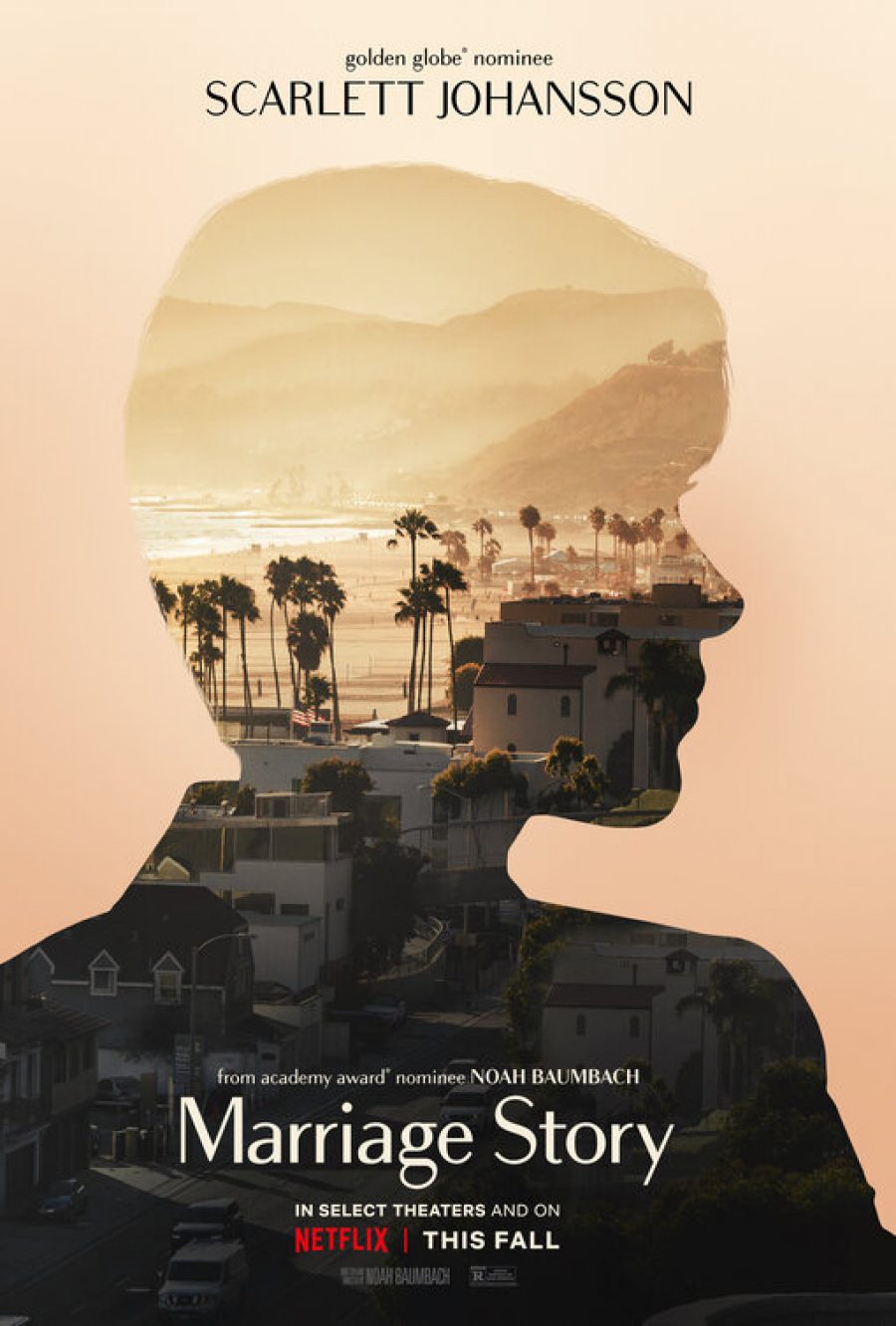 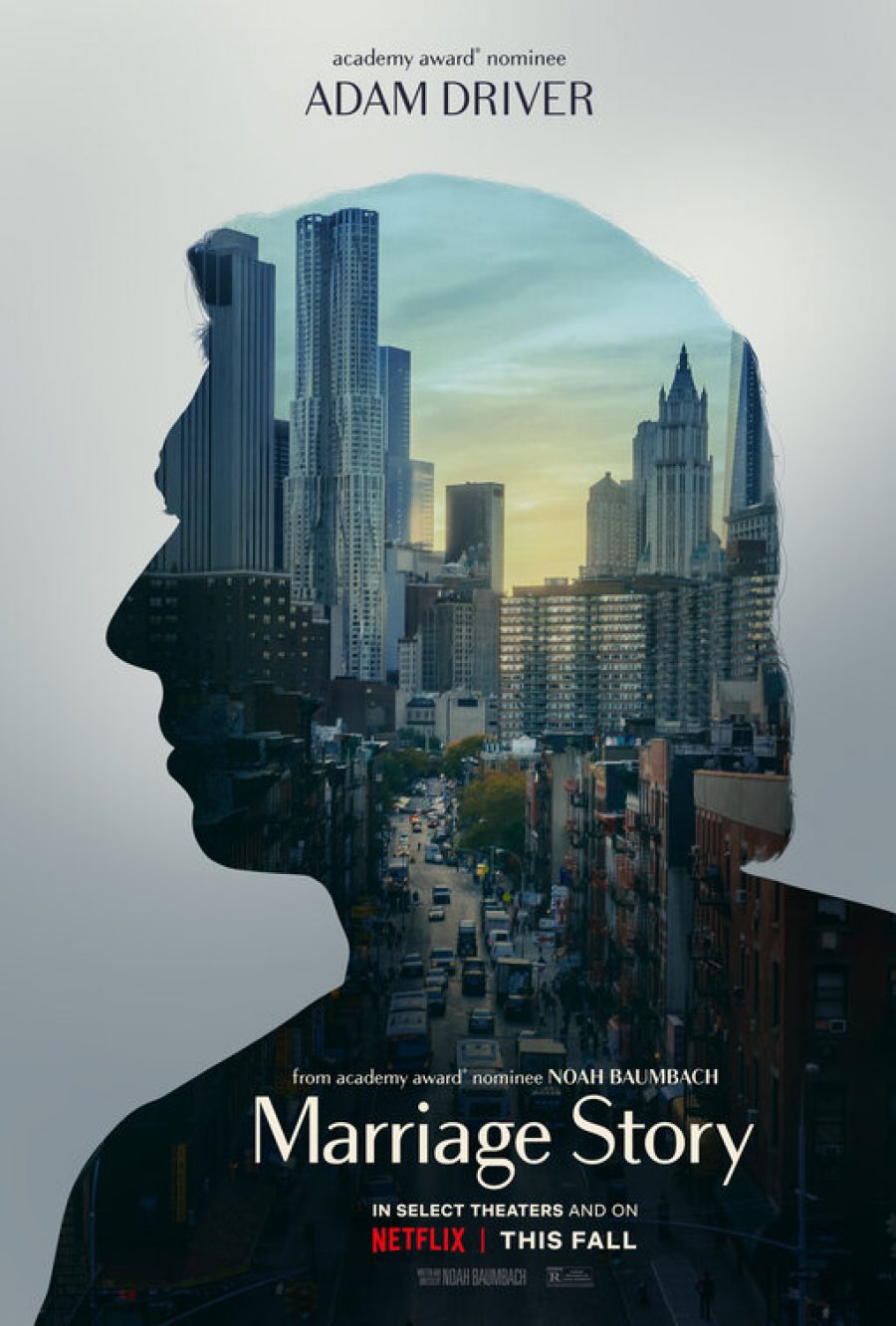 The set of twin posters for Noah Baumbach’s Marriage Story reflect the separation between Nicole and Charlie as they live their separate lives in Los Angeles and New York. Peach and baby blue show her warmth and his coolness – sure it’s an obvious visual metaphor, but when you’re trying to illustrate the ways a couple have drifted apart, it makes total sense. 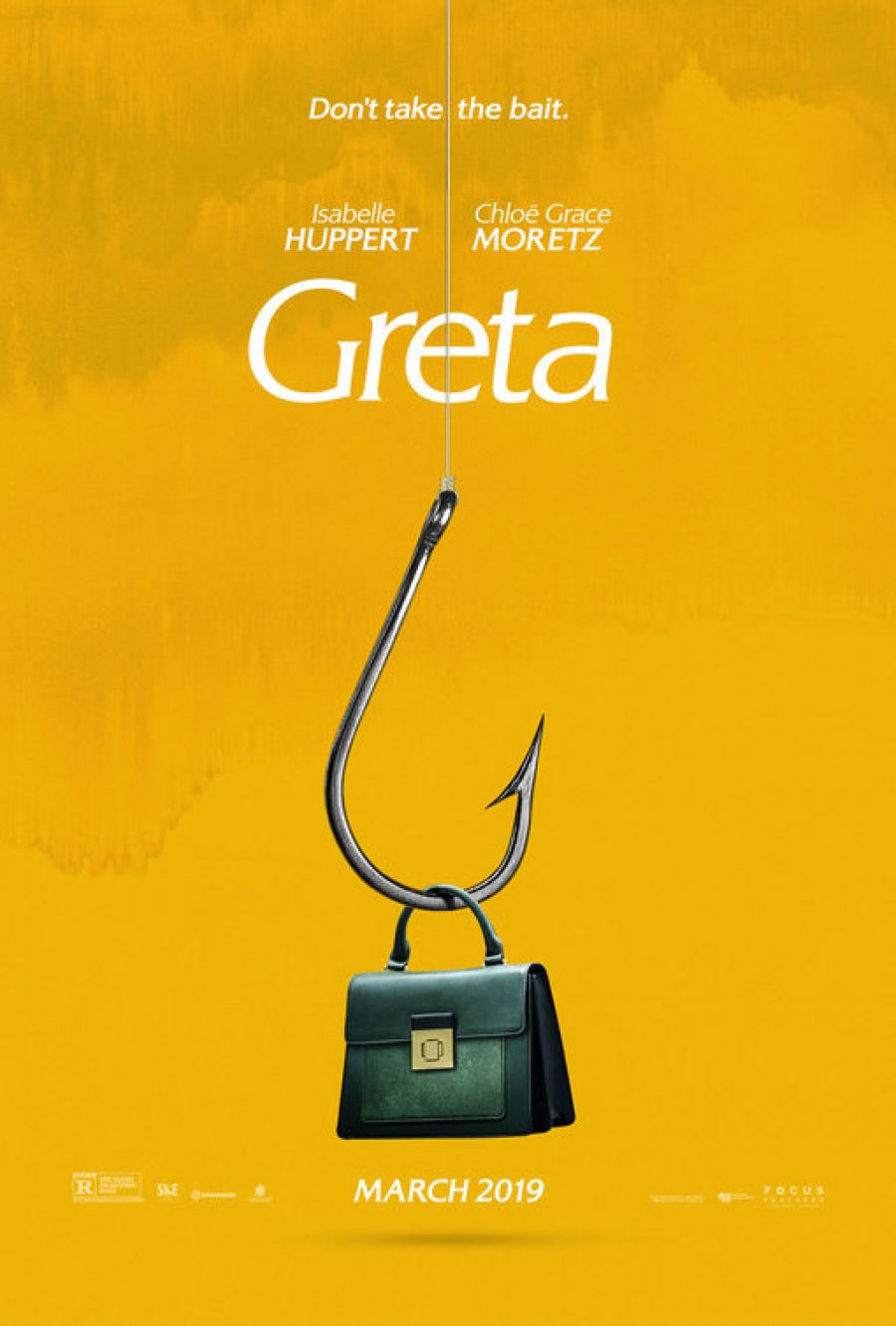 Designed by B O N D 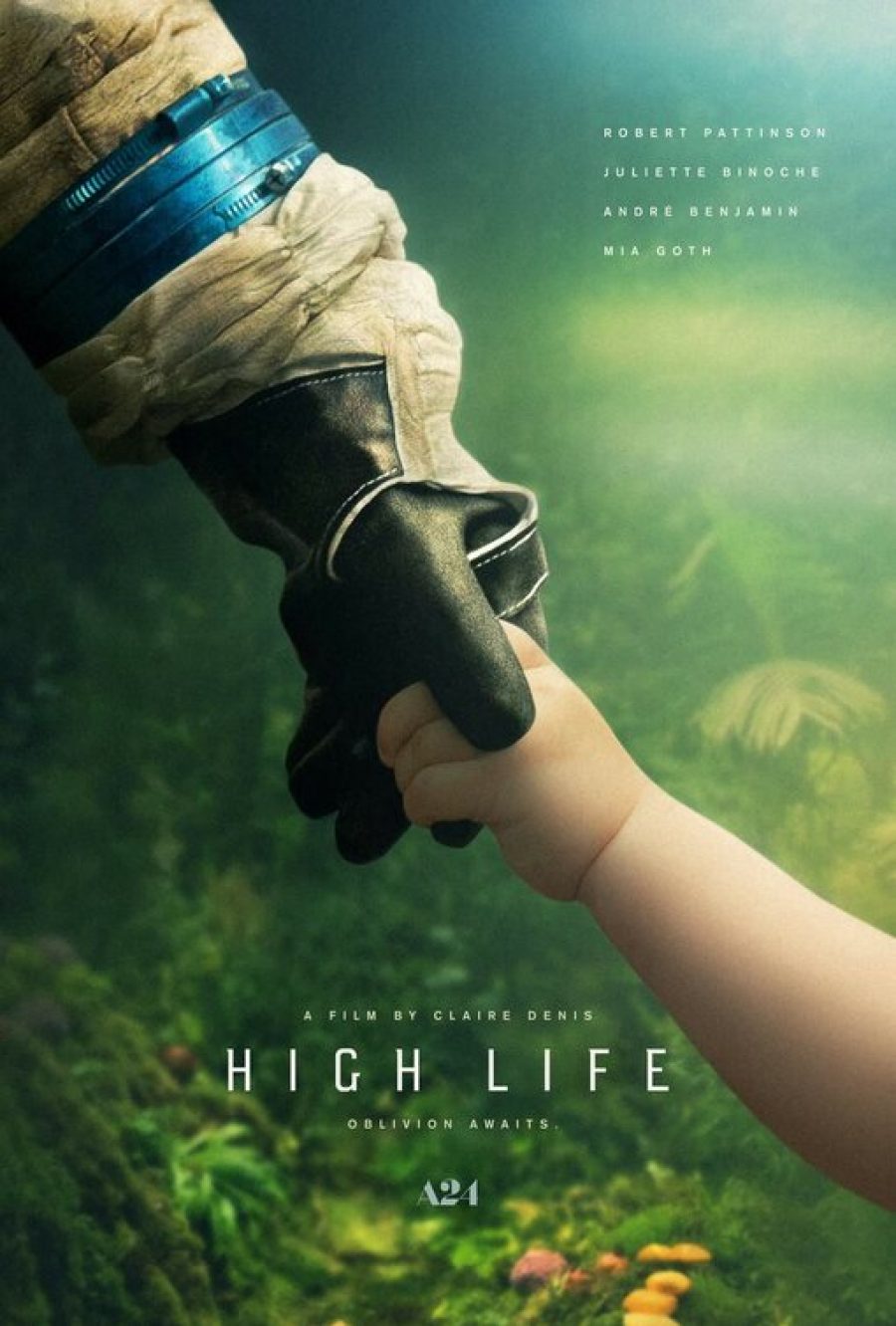 The lushness of this poster for Claire Denis’ space epic teamed with that damning tagline is poetry. High Life is a film in which hope coexists with abject despair; not an easy thing to get across in a poster, but this pretty much nails it without giving away anything of the plot. 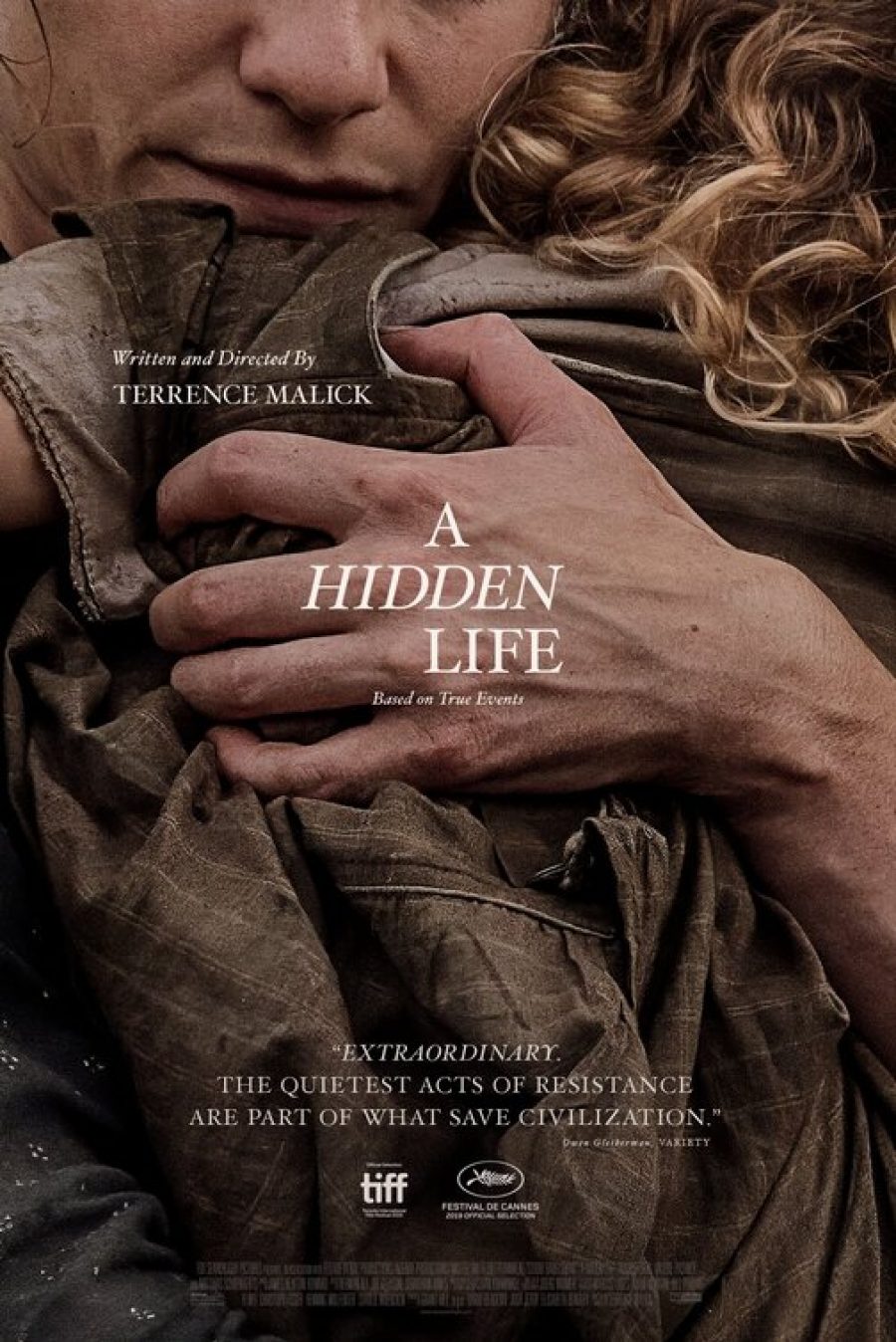 There’s something quite sparse about the poster for Terrence Malick’s wartime drama, about conscientious objector Franz Jägerstätter’s imprisonment during World War Two. In obscuring his face the poster reflects the film’s sentiments about the nature of resistance, as reflected in the George Eliot quote which gives the film its name: “The growing good of the world is partly dependent on unhistoric acts; and that things are not so ill with you and me as they might have been, is half owing to the number who lived faithfully a hidden life, and rest in unvisited tombs.” 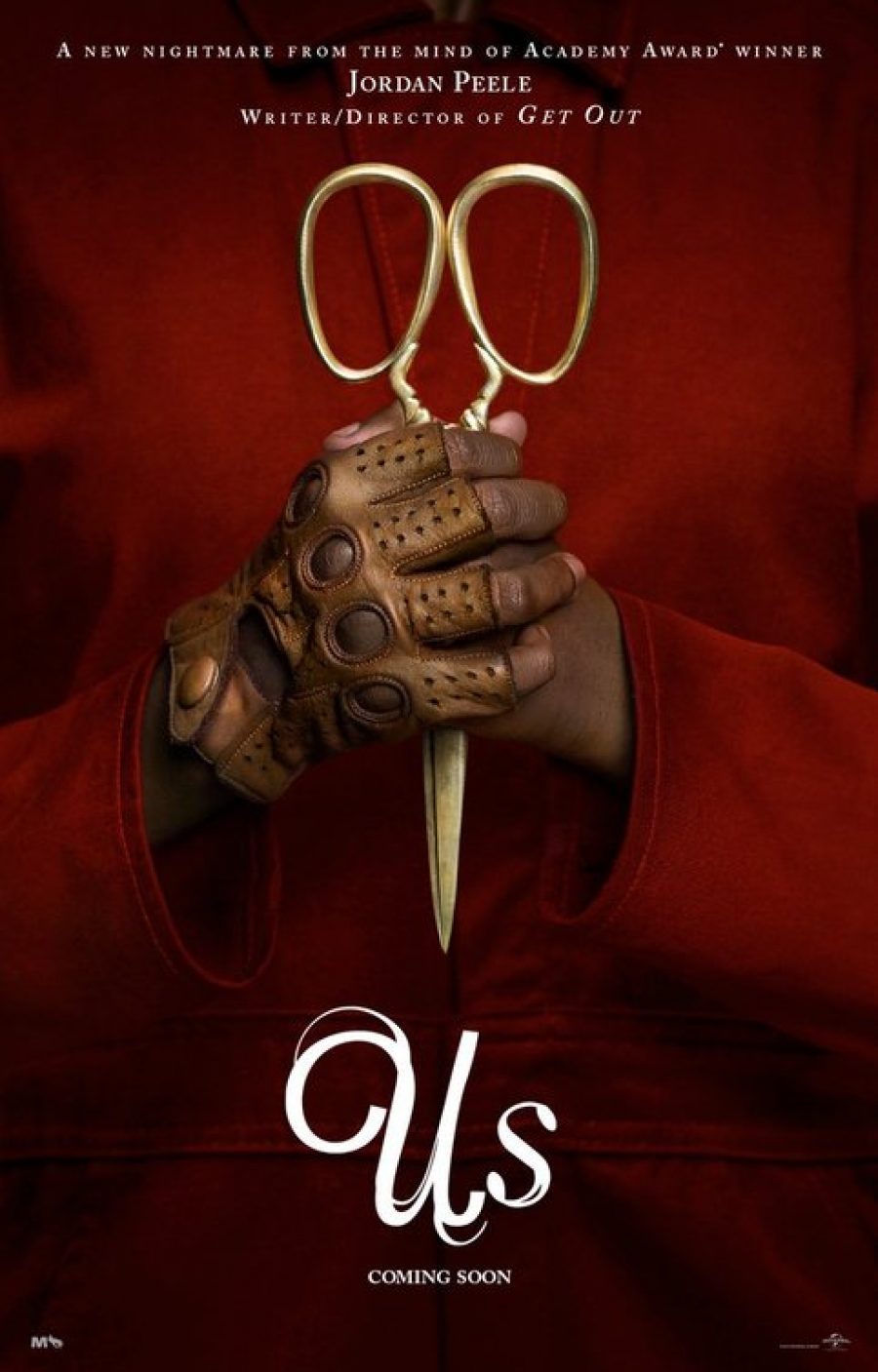 The whole marketing campaign for Jordan Peele’s follow-up to Get Out was pretty inspired, from that trailer which made good use of Luniz’s ‘I Got 5 On It’ to the promotional scissors dispatched to media personalities around the world. This poster depicts Lupita Nyong’o’s Tethered – with her distinctive red jumpsuit and single leather glove – and creates an immediate sense of foreboding. The cursive font seems almost romantic, which is…quite something, given the tone of the film. 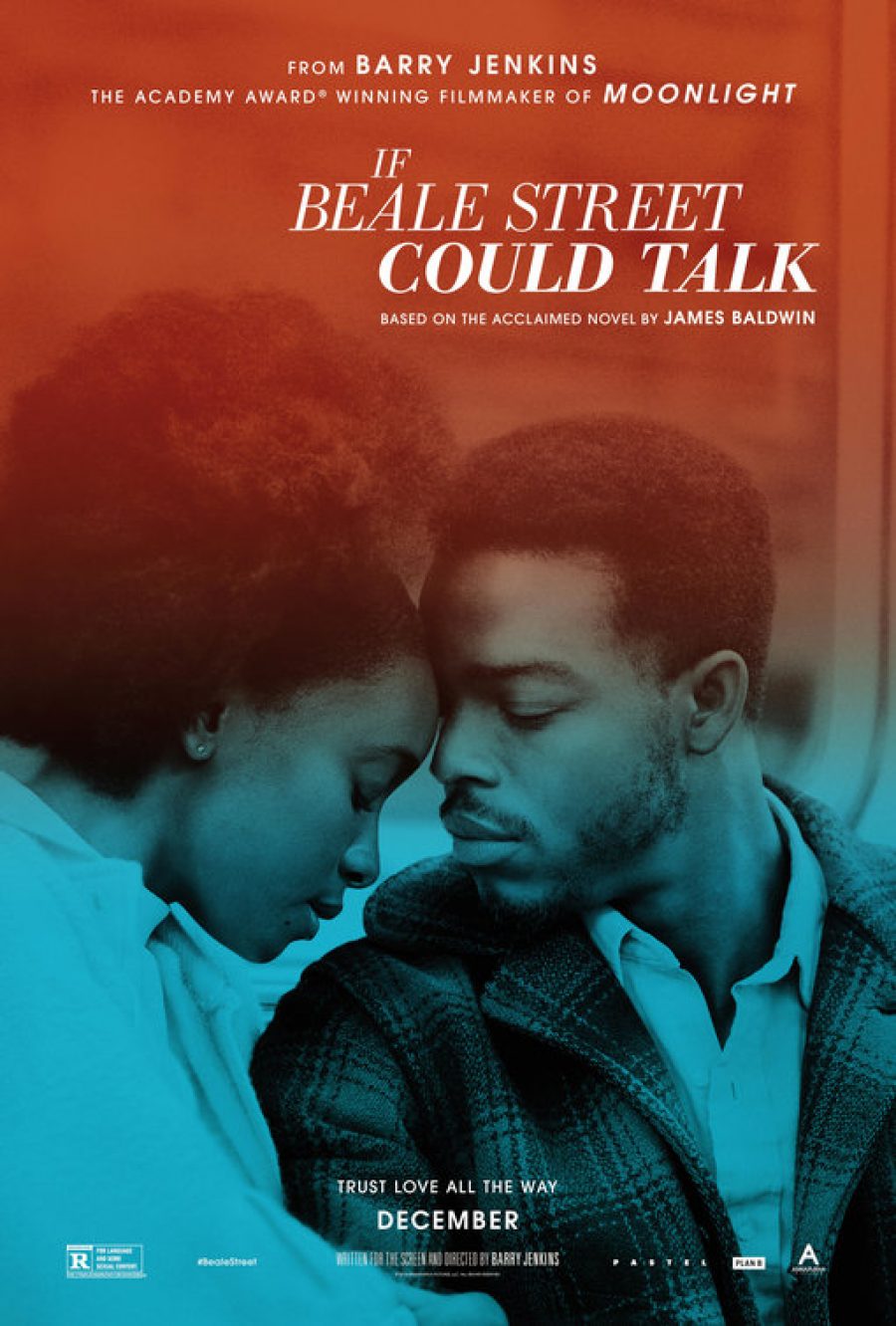 10. If Beale Street Could Talk

Designed by InSync Plus

As with the poster for Moonlight, Barry Jenkins’ latest film uses strong colour gradients to great effect. Orange and blue could mean so much in the world of Tish and Fonny; the trajectory of their love story, the different worlds they come from, their feelings when together and apart. But most of all, the poster hints at the fact If Beale Street Could Talk is a love story without at all seeming saccharine. 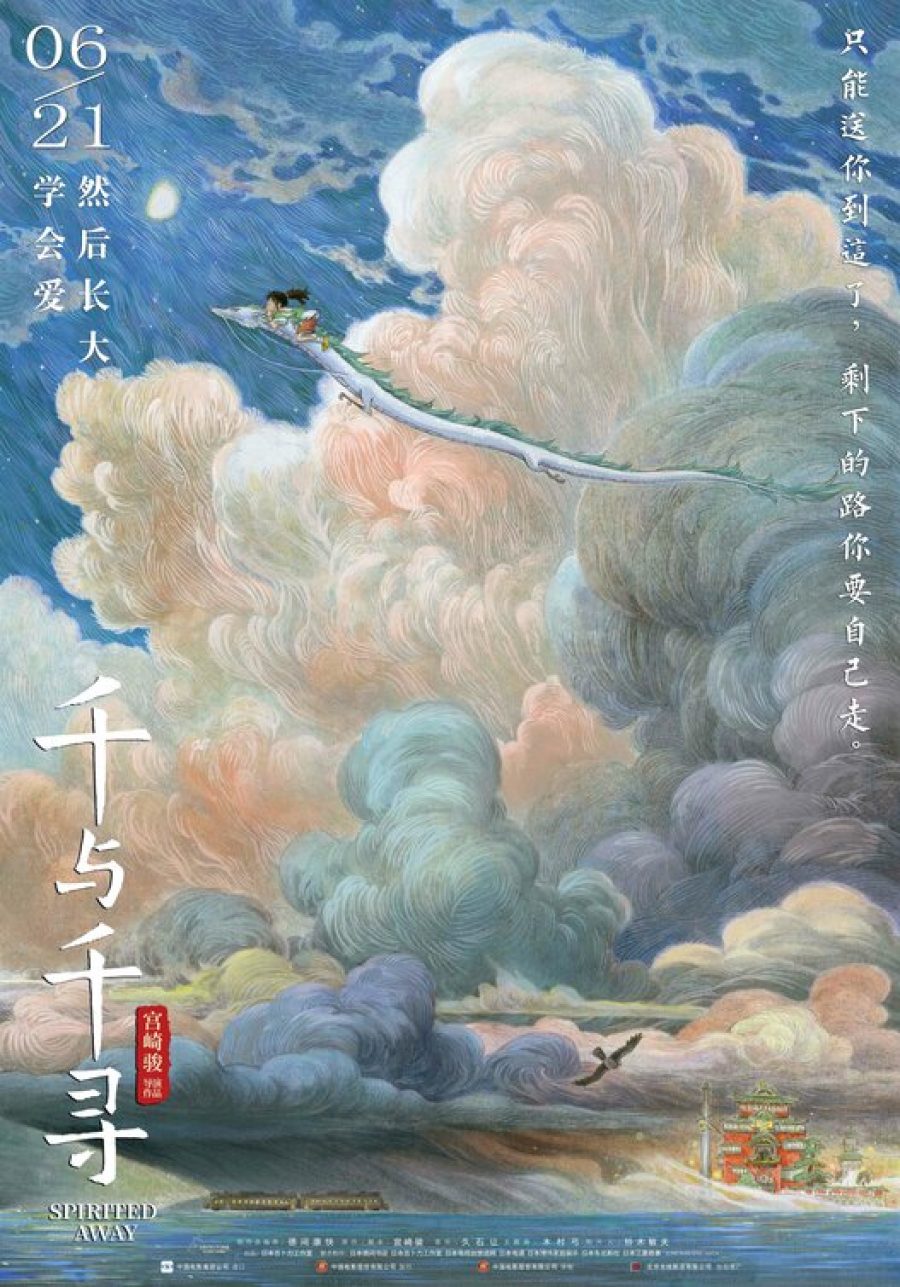 Last year we showcased the Chinese poster for My Neighbour Totoro – this year Spirited Away got similarly beautiful treatment, courtesy of artist Zao Dao, in time for the film’s release in China. Chihiro and Haku soar high above the clouds in this illustrated version of one of the film’s most breath-taking scenes. 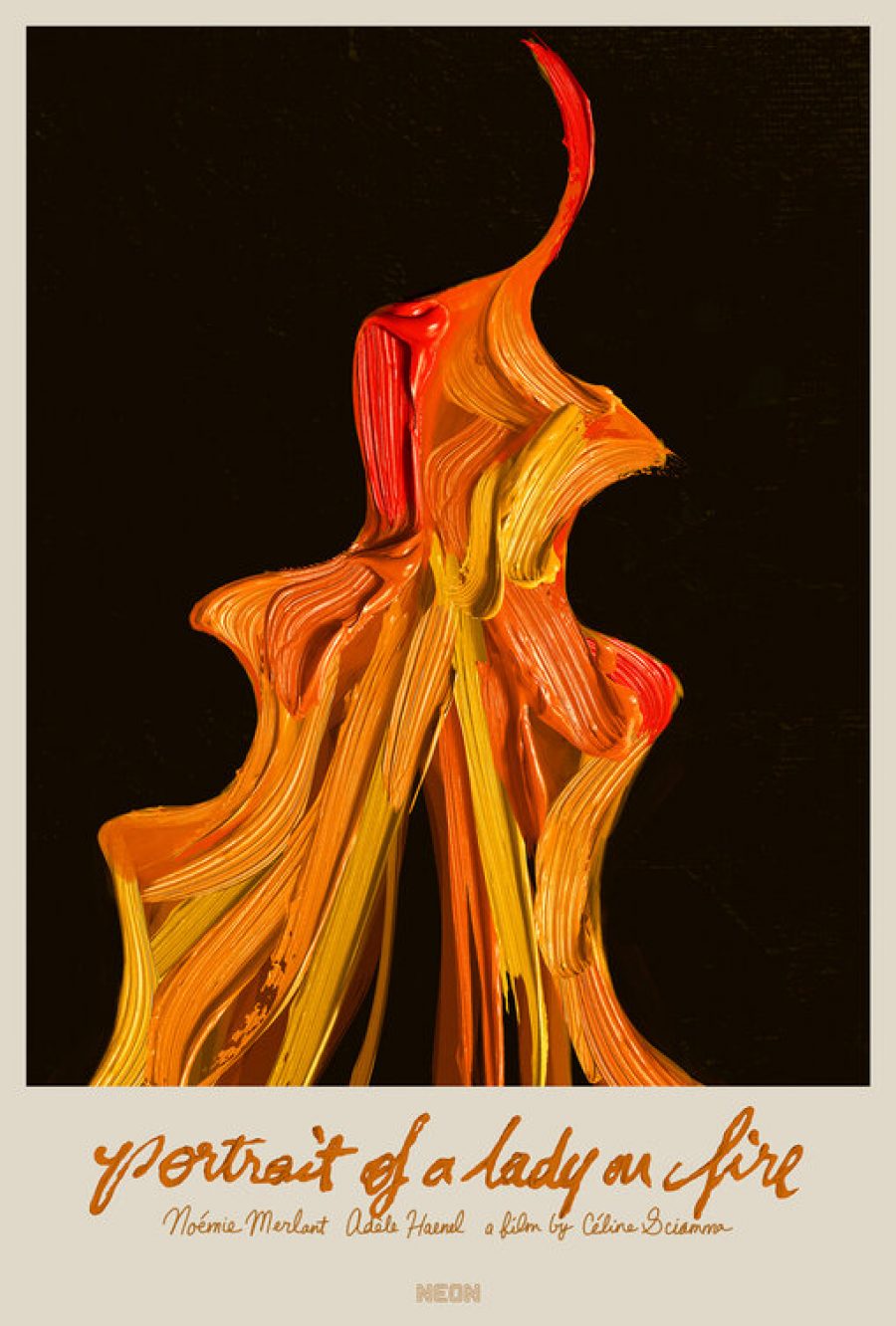 8. Portrait of a Lady on Fire

This painted design for the American release of Portrait of a Lady on Fire contains a nifty hidden visual of two women about to kiss – one of those ‘once you see it, you can’t unsee it’ gambits. The high contrast of flame colours against black mimics the film’s titular scene, while the handwritten font feels period-appropriate as well as romantic. 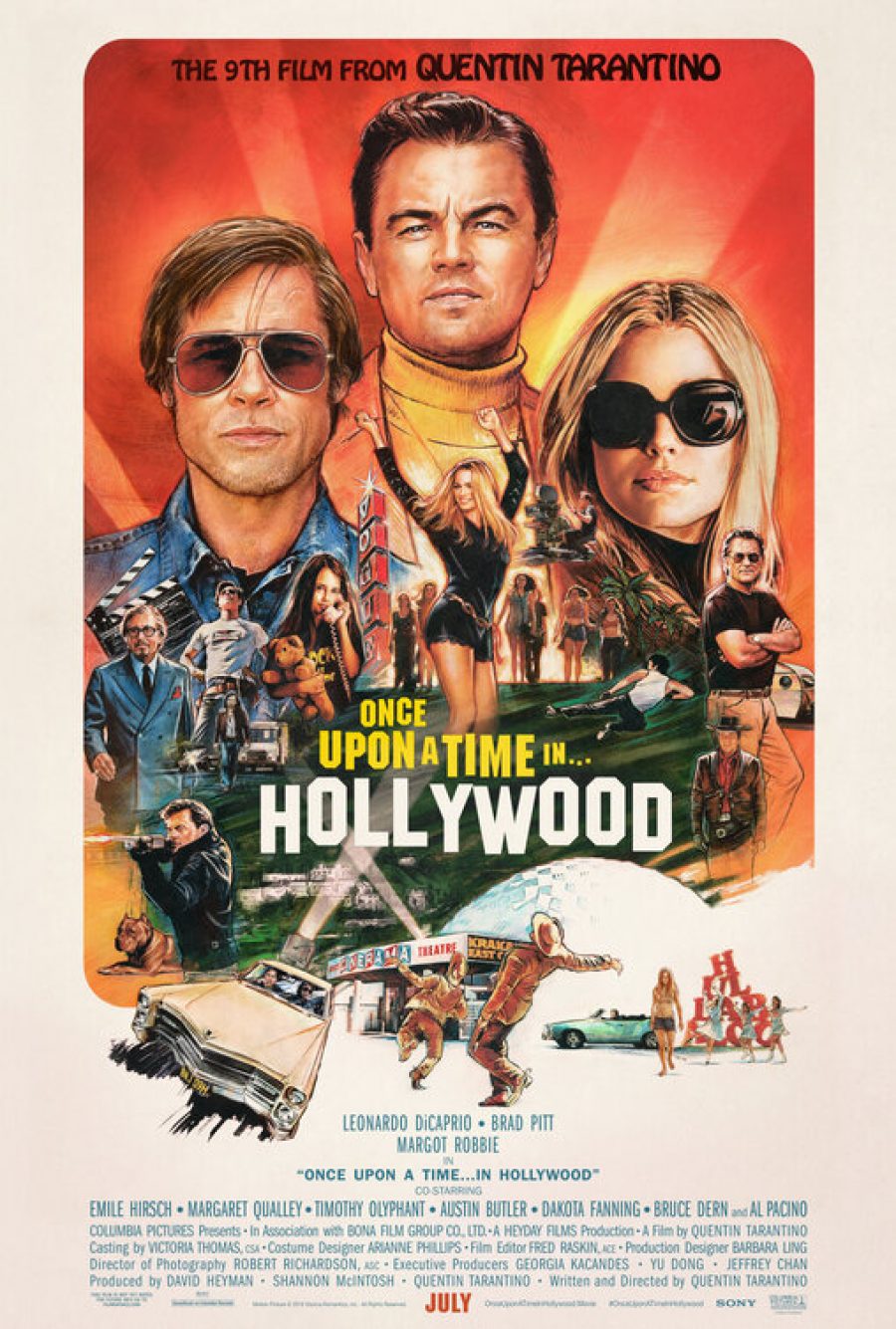 7. Once Upon a Time…in Hollywood

Although the first set of posters for Quentin Tarantino’s 10th film were something of a misfire, this one – in the style of the hand-drawn posters of the ’60s – is a gem. The best part? Why, the tiny Tarantino behind the camera just next to a dancing Margot Robbie, of course. 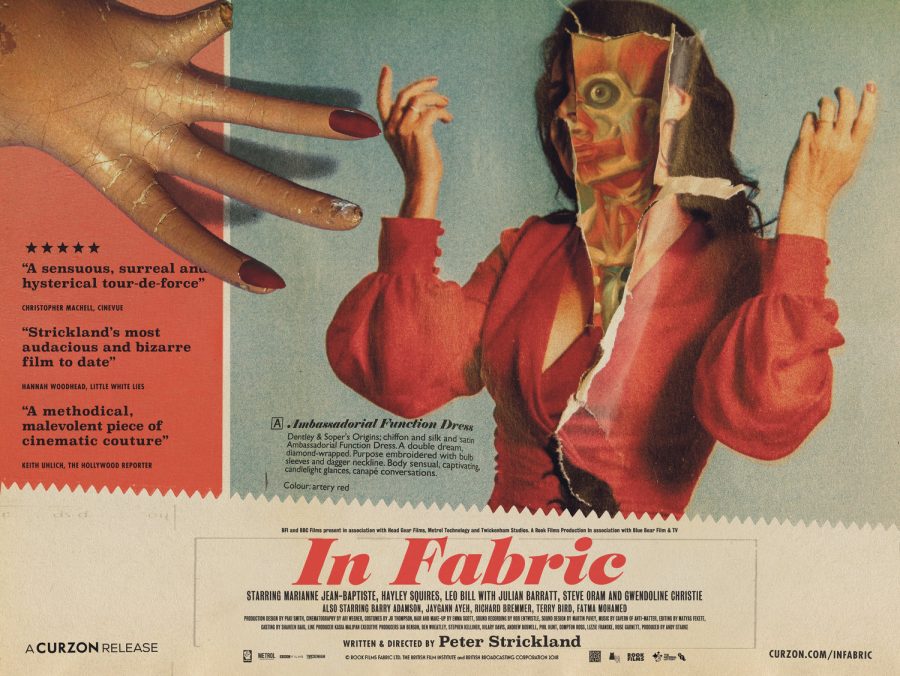 Designed by Julian House at Intro

Julian House also designed the rather groovy posters for The Duke of Burgundy and Berberian Sound Studio, and this effort is his finest work yet. Drawing inspiration from the shopping catalogue seen in the film as well as hinting at the demonic forces at work in Dentley and Soper’s department store. 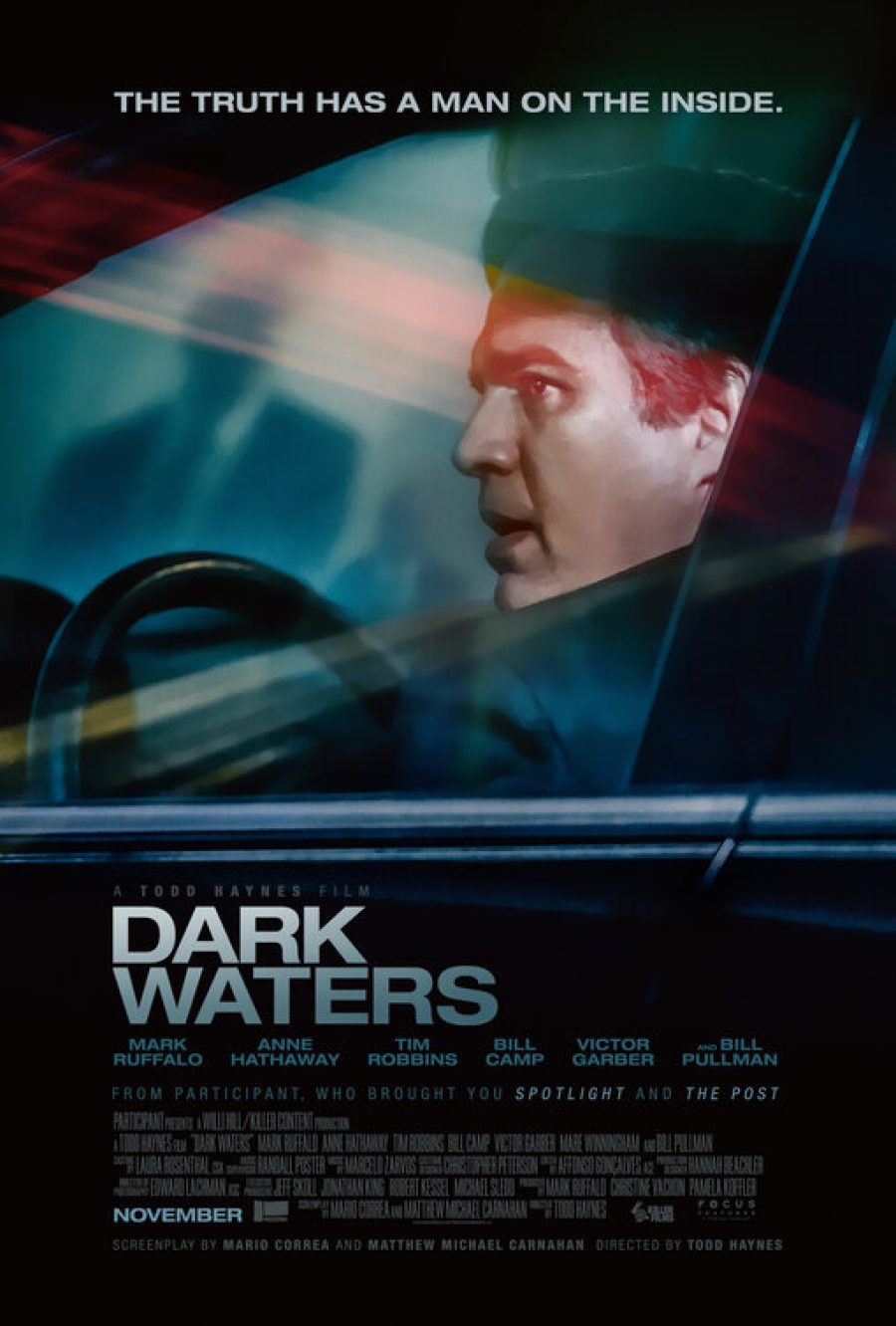 The poster for Todd Haynes’ excellent legal drama looks a little like the cover for an old-school spy paperback, which is fitting given how much of the film Mark Ruffalo spends looking over his shoulder for the wrath of DuPont. 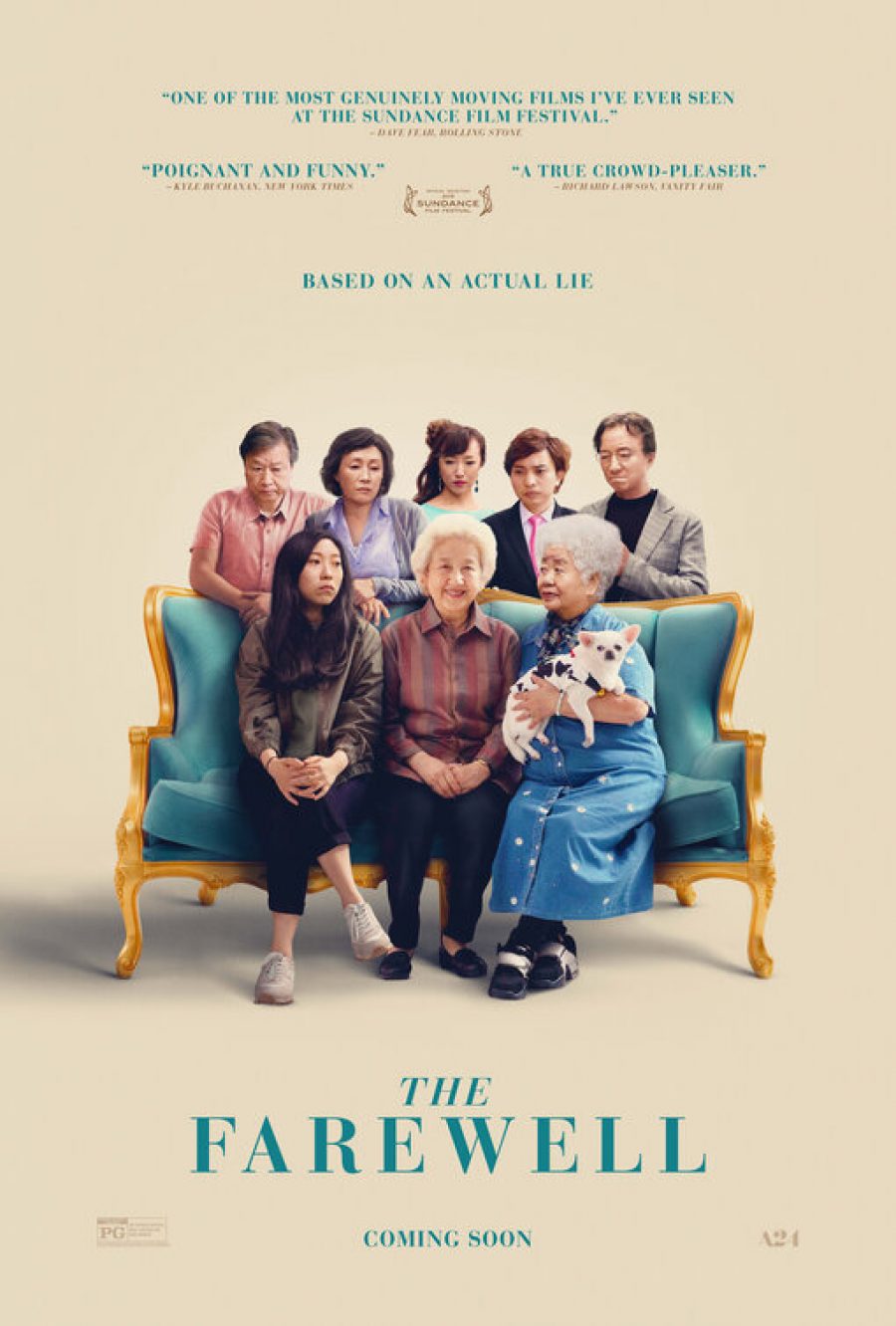 Designed by InSync Plus

Simplicity is underrated when it comes to film posters, as this one-sheet for Lulu Wang’s The Farewell demonstrates. The family portrait shows Nai Nai front and centre happily smiling while the rest of her family – the ones who know about her cancer diagnosis – look on sadly. Although the film does, in theory, sound awfully sad, it also has a lot of humour to it; demonstrated by the playful ‘Based on an Actual Lie’ tagline. 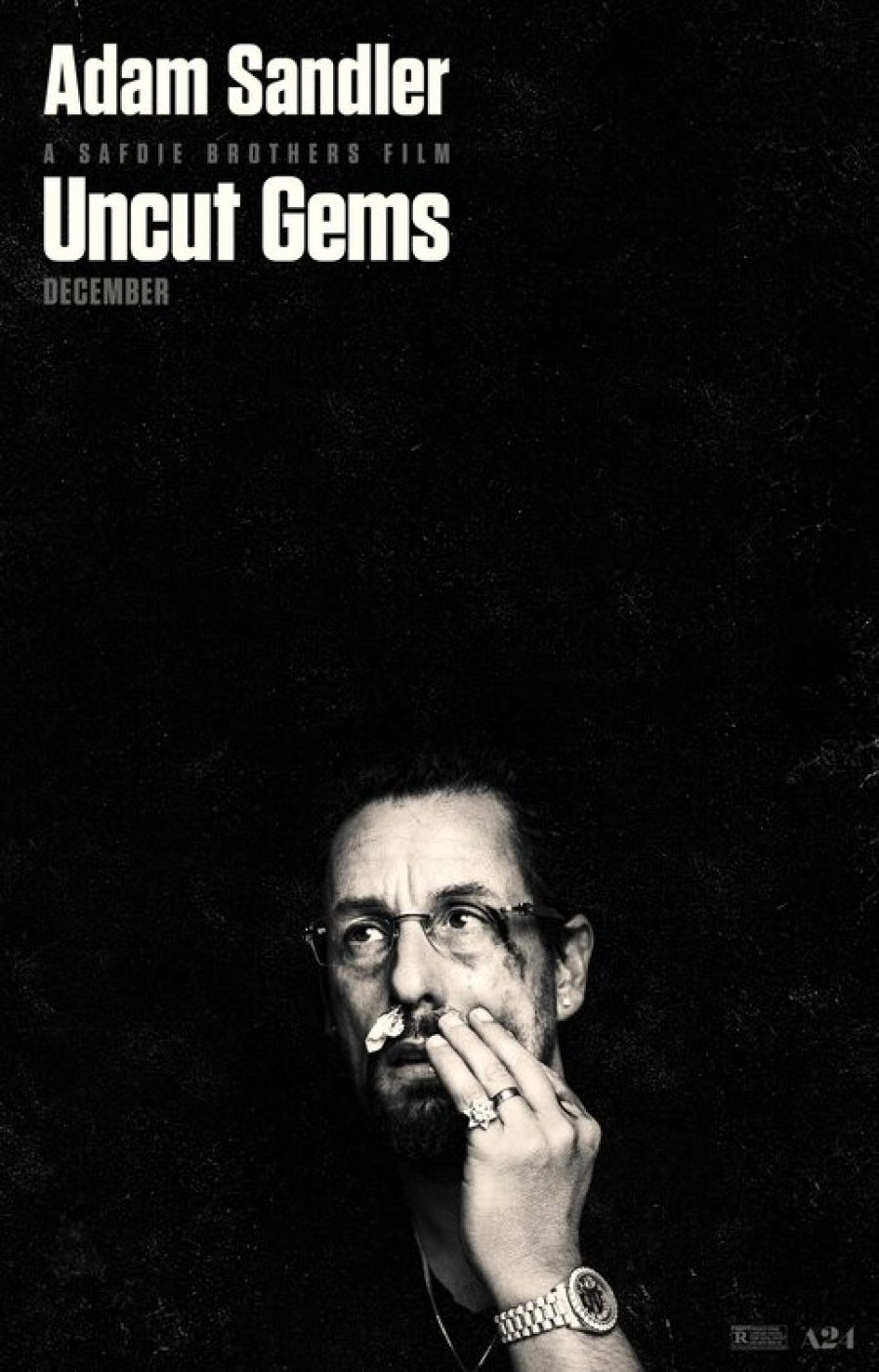 Changing gear completely from the bright greens and purples of the Good Time marketing campaign, there’s only been one poster released for the Safdie Brothers’ forth feature. It’s striking for sure, with Adam Sandler’s Howard Ratner front and centre, but – like the best posters – gives absolutely nothing away about the film itself. No quotes, no tagline. Just Safdie, Sandler, December. That’s all you need to know. 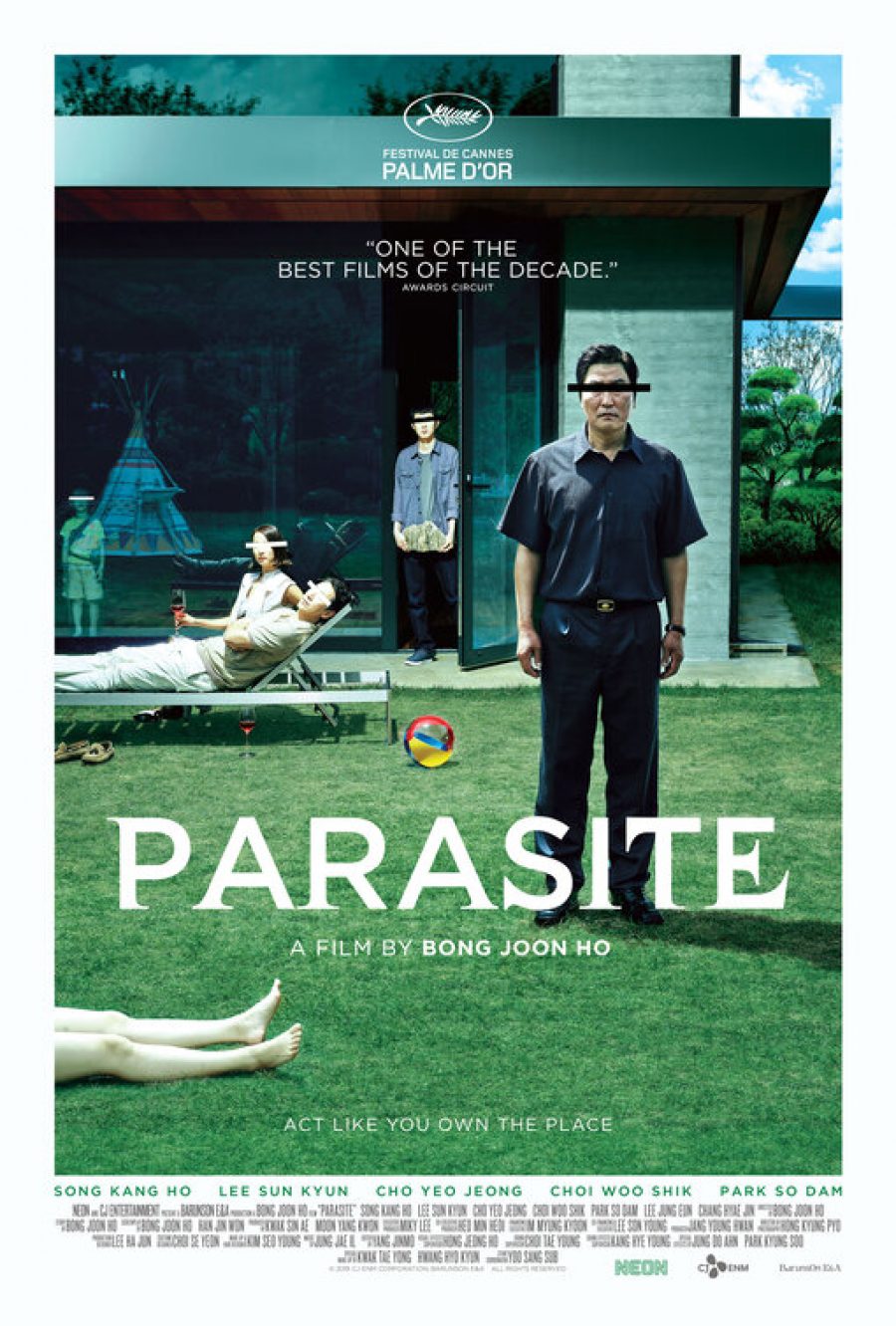 The visual clues in the poster for Bong Joon-ho’s social satire are a scream once you’ve seen the film and can connect the dots, but even beyond that, it’s a bold design statement that deserves framing. Of particular note is the title font, with its spikey tips, and the use of white/black bars to differentiate between the Park and Ki-taek families. 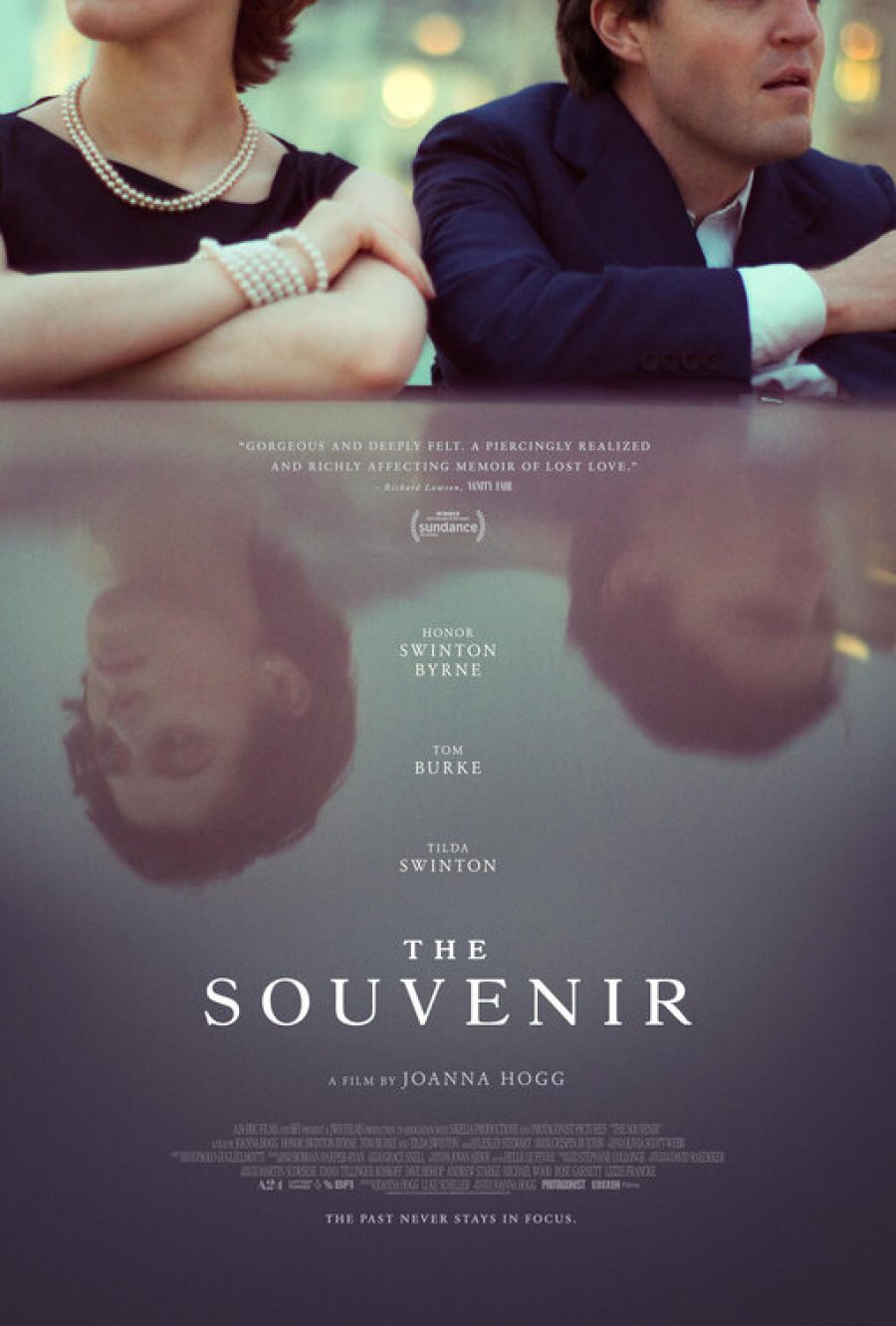 As well as being our favourite film of 2019, The Souvenir also ranks top of our poster list. A simple, poignant tagline, serif font with perfect kerning, use of reflection to demonstrate the distortion of reality – it’s a design dream that fits in perfectly with the film’s aesthetic. We’re big fans of this alternative poster and Sam Ashby’s design for the UK release. Great work all round, folks. 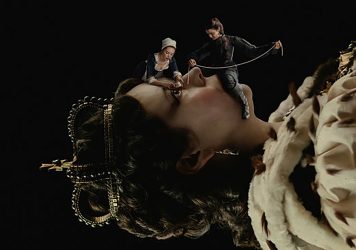 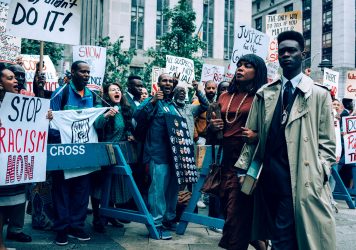 From Stranger Things to Succession, Watchmen to When They See Us, these are the series we’ve rated this year.