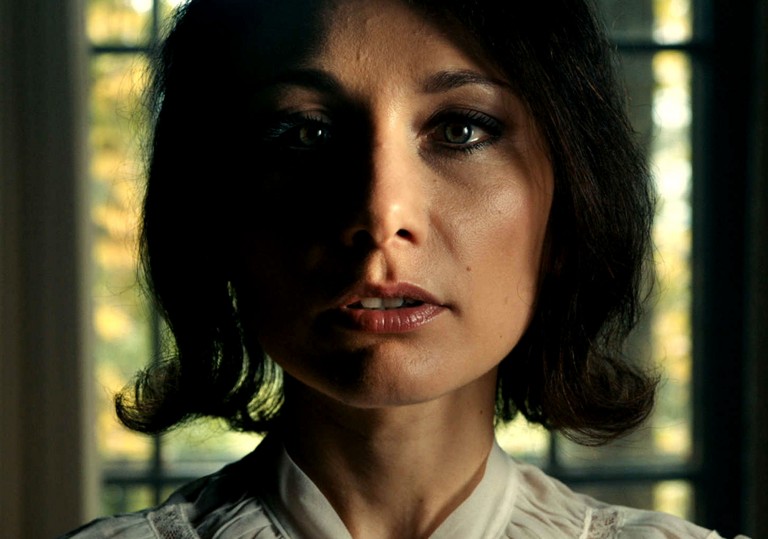 The strange vices of Peter Strickland have proven enchanting so far.

An unconventional love story wrapped up in a sexy skin.

So impressive... So perverse.

Love can be a cruel mistress, as British director Peter Strickland so exquisitely illuminates in this startlingly beautiful piece of Euro erotica. The shifting nature of long-term relationships is explored through a couple with a fetish for butterflies and S&M and it’s a sumptuous, spellbinding, sensory experience. Cynthia (Sidse Babett Knudsen) and Evelyn (Chiara D’Anna) inhabit a sequestered abode in an unnamed European town which is occupied only by women. They spend their days playing sex games, studying butterflies and cycling to a grand etymology institute where they listen intently to lectures.

Seductive and sensitive by turns, Strickland sinuously studies Cynthia and Evelyn’s pairing with elegance, style and a frank emotional honesty. He places their activities under a microscopic lens, switching perspectives, opening up their bond for dissection and digging deep into their fantasies and feelings. They appear to be forever shackled to one another in an isolated autumnal conservatory which cages them in an eerie universe. Strickland applies the same level of precision and dedication to vigorously studying their kinky routines as a Lepidopterist does to investigating the fragile wings of a butterfly.

Strickland’s previous feature, Berberian Sound Studio, played with giallo tropes through sound. In The Duke of Burgundy, the director once again subverts expectations with the teasing of flesh exposing underlying woes. We first meet the couple as they are engaged in a servant and master ritual which provides an unnerving glimpse into their lifestyle. Evelyn peeks through keyholes at her lover undressing but just as in Luis Buñuel’s Belle de Jour there is no actual nudity. Instead, the many layers of their relationship are peeled away to reveal universal truths which surface through their unabashed role-play.

Evelyn’s inexhaustible appetite for masochistic pleasure weighs heavily on Cynthia’s mind, with her aching guilt and dissatisfaction eventually piercing through the eroticism. Role-playing is occasionally replaced with reality, but compromise for this couple proves to be a delicate and uneasy affair. It’s not all heavy petting and deep emotional turmoil, however, with Strickland underpinning his rich and rewarding meditation on love with a mischievous sense of humour. Absurd visual jokes are dotted throughout; look out for the randomly placed mannequins in the lushly designed lecture halls and the credits sequence which lists “Perfume by Je Suis Gizella.”

The strange vices of Peter Strickland have proven enchanting so far.

An unconventional love story wrapped up in a sexy skin.

So impressive... So perverse.