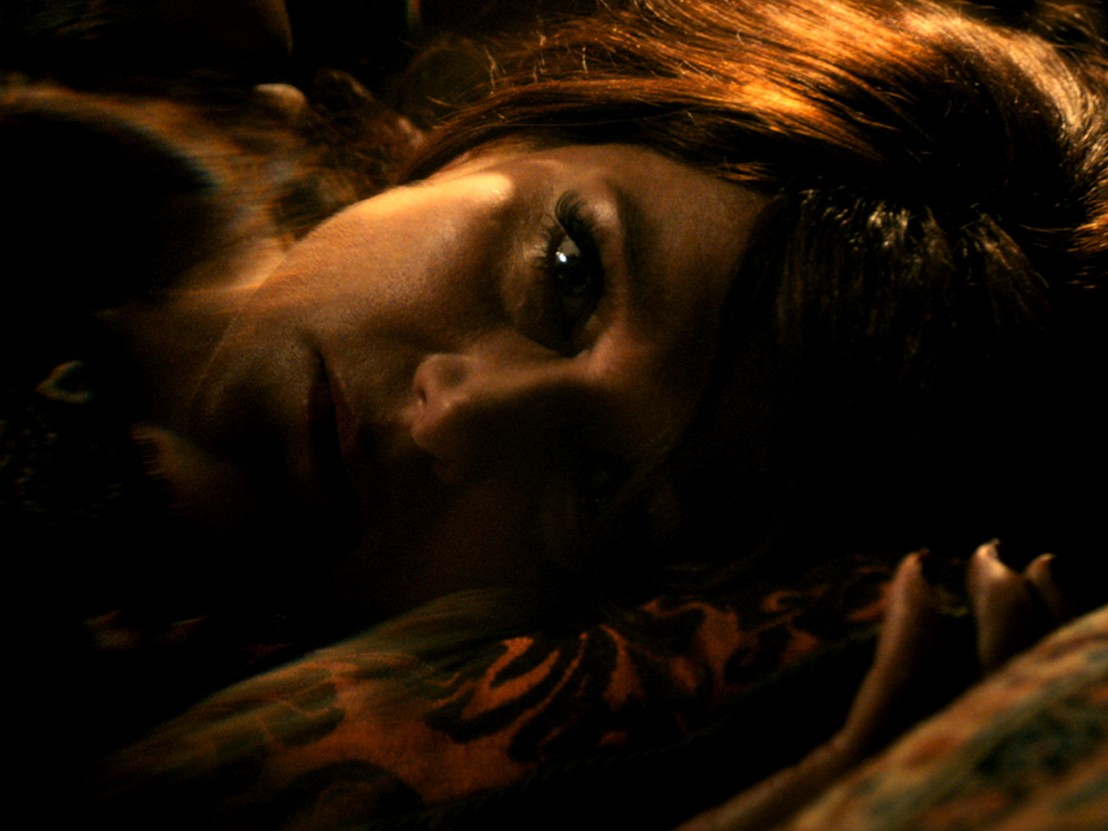 Peter Strickland’s The Duke of Burgundy is many things: sensual erotica; progressive LGBT cinema; even romantic comedy. But the most powerful story it tells is about two individuals and their opposing languages of love.

Cynthia (Sidse Babett Knudsen) and Evelyn (Chiara D’Anna) live together in a ridiculously opulent house in an unspecified European village populated only by women. Strickland doesn’t touch upon explanatory details. His focus is pure and heightened and fixed on the way the two women interrelate.

Their specific dilemma is how to reconcile Evelyn’s masochism with Cynthia’s more traditional tastes. Their struggle isolates the ongoing issue that individuals within couples face: how to please both themselves and their lover. A poignant but humourous scene shows a declaration of love impatiently shot down in favour of dirty talk. There is a point to which this type of clash is inevitable and a point to which it is gratuitously painful and a klaxon call for parting. Strickland brings to life a relationship where the love is not gone but pain — in and out of S&M role-play — is an ongoing undercurrent that constantly reframes our understanding of how these women are coping.

Strickland uses a specific, cinematically rewarding and sensual type of domestic set-up to explore power, but the struggle between generous love and personal need is universal. “The nature of life is there’s always something that has to be sacrificed…. When I think of people that I know there’s always someone who has to compromise,” Strickland said in a recent interview with LWLies.

Strickland has cited German new wave director Rainer Werner Fassbinder as an inspiration, specifically his 1975 film Fox and his Friends. “When Fassbinder brings his boyfriend to dinner his parents don’t even question it,” explains Strickland. “In the late ’70s it was always about acceptance when you bring the boyfriend over for dinner. But in Fox and His Friends it was just like bringing your girlfriend for dinner. They spoke about other things.” The Duke of Burgundy has taken the lead of its inspiration. It is so earnestly at the core of a love quandary that it is not about the particulars of sexuality.

Another German named Rainer eloquently expressed a solution to disconnection in couples. Poet Rainer Maria Rilke wrote: “Once the realisation is accepted that even between the closest people infinite distances exist, a marvellous living side-by-side can grow up for them.” While this is a salve for a certain level of benign separation, there is a type of distance that lends itself more to pain, doubt and madness than anything like marvel. The communion-separation balance has to be determined by individuals, rather than a couple hive-mind. A couple can only function when two people are in harmonious accord over the state of their togetherness. In The Duke of Burgundy the camera lingers on the women’s faces separately as frequently as it photographs them together, searching stoical performances for clues as to personal happiness.

Sidse Babbett Knudesen’s soft voice imbues Cynthia with melancholy as she fulfils her role and orders her sub to perform domestic chores. She sits alone at a typewriter or alone in front of a mirror, never fully convinced by her task, huge eyes flitting restlessly and unseeingly. As Evelyn, Chiara D’Anna also seems caught in reveries. Evelyn washes Cynthia’s elegant satin underwear hypnotised by the rainbow patterns that dance across the suds. She is slacking off her flesh and blood partner in favour of personal fantasies. Despite the women being each other’s sole human contact, imagination nudges them apart.

The power imbalance here is that one woman is acting for herself while the other acts for her loved one. The film is a slow submergence in the question of whether Cynthia will accept power balance for the sake of Evelyn. What happens when inequality is accepted in the name of love and desire? Sam Taylor-Johnson’s Fifty Shades of Grey explores the same question from two conflicting points of view. Talking about his formative years as a ‘sub’, Christian Grey says, “When I gave up control I felt free from responsibility and decision-making. I felt safe.”

Submission bequeathed him a cocoon away from the storms of society. Anastasia Steele is not as convinced of the benefits of abandoning her free will. The strength of her identity is protection for her and a phenomenon for him in that it offers a departure from the familiar patterns of S&M power play. It is terrifying for him to go off-script, off-cue and simply follow feelings. Her power is his weakness and vice versa. When sexual tastes are in opposition, love becomes a battle for dominance. As for who will come out on top, Fassbinder offered the following view:

Strickland’s style is gentler and more abstract than his German forebear. Cynthia and Evelyn try to sidestep power issues in order to live side-by-side. They cycle together, sleep together and fuel lepidopterist obsessions together. Amid the dusky light and decadent furnishings of their mansion, Nicholas D Knowland’s sensual cinematography captures the shared life they try to snatch from the jaws of their warring predilections. Cynthia inches her skirt up as Evelyn kneels at her feet. We hear the cloth scratching against her stockings, Strickland framing the point of friction in intimate close-up. This is the camera’s way of evoking Cynthia’s sensitivity to the sharpened focus of her lover’s charged gaze. S&M never seemed so merciful and compassionate.

Evelyn is either not willing or not able to be as flexible with love’s language. She is a slave to her desires, child-like and id-driven, whispering her disdain at a butterfly lecture and susceptible to another woman who shares her bedroom tastes. (Could streamlined taste be more of a determiner of coupledom than attachments forged on emotional grounds?)

Sometimes Cynthia’s role seems more like a care-giver than a lover. The narrative progresses to Cat’s Eyes’ otherworldly sounds and engagement with the abstract realm of emotional decisions heightens. Will she surrender her identity to serve her lover’s insatiable sexual appetite? Or are the forces of self-preservation more powerful than love? And if wilful love can’t keep people together, what on Earth can?

Tags: The Duke of Burgundy