Watch the trailer for Werner Herzog’s Queen of the Desert

While noted nihilist filmmaker Werner Herzog releases documentaries on a near yearly basis, Queen of the Desert will be his first feature film since 2009 – when both My Son, My Son, What Have Ye Done and Bad Lieutenant were released. His long-awaited return to fiction is rooted in fact: the true story of cartographer/archaeologist/explorer Gertrude Bell.

Nicole Kidman stars in the lead role as the political officer who worked overseas on behalf of the British Empire at the turn of the 20th century. Bell initially left England for Tehran, and her travels gave her the necessary experience to serve as a mediator in negotiations between Winston Churchill and various Middle Eastern leaders regarding borders and sovereignty.

She faced opposition for taking on a position like this as a woman during this period, noted by this trailer’s defiant statement, ‘This woman is joining the men’.

Herzog lived up to his reputation on the production, apparently insisting on filming during an actual sandstorm. Hopefully this intensity translates to the screen, although the negative reception the film has received so far from its early European release fosters some doubt.

Queen of the Desert also stars James Franco, Robert Pattinson and Damien Lewis, with Pattinson cast as TE Lawrence, who was famously played by Peter O’Toole in 1962’s Lawrence of Arabia. No UK release date has been set, but the film will be released in US theatres and on selected VOD platforms on 14 April, so we’re expecting to see it sooner rather than later. 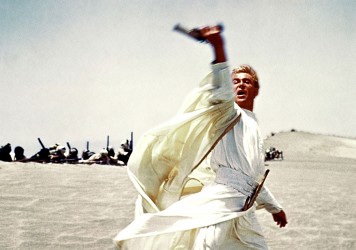 Restored, re-released and resplendent. David Lean’s 1962 historical epic is back, and better than ever.