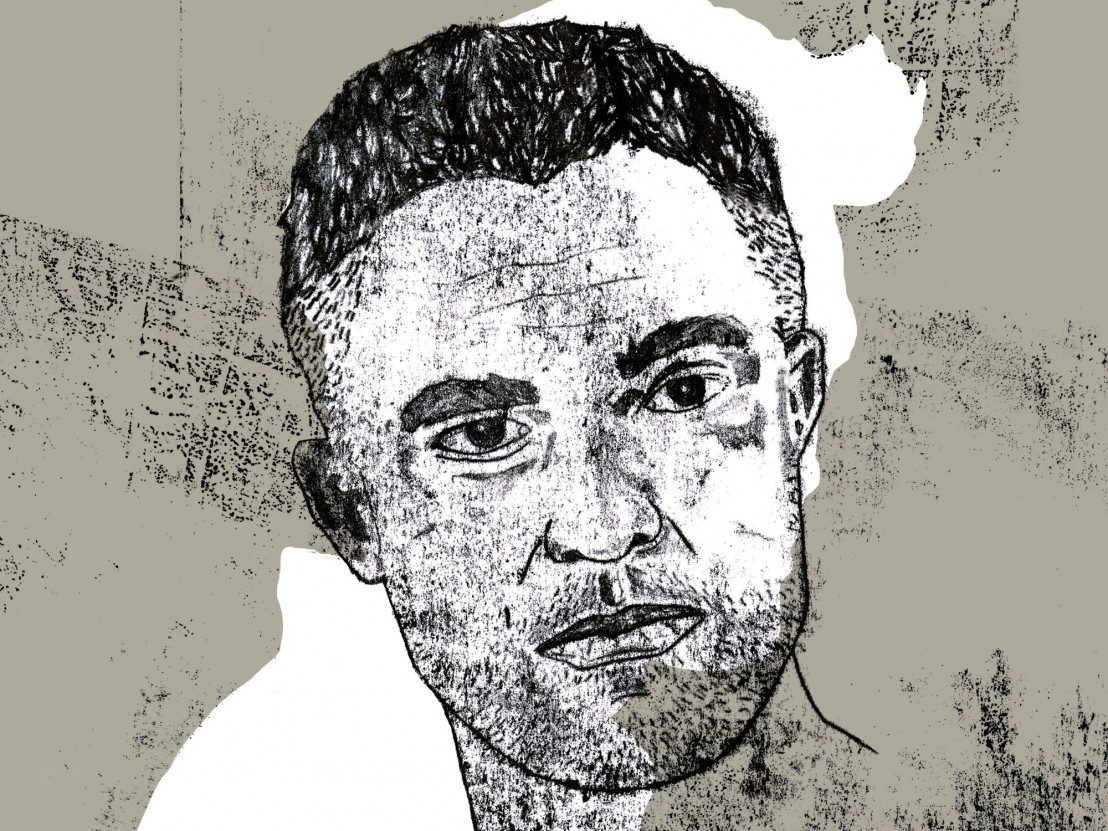 Robert Pattinson’s star power still burns across the globe but all he wants to do with it is make interesting art house movies. David Michôd’s The Rover fits that bill. In it, Pattinson stars opposite Guy Pearce as a splash of humanity in a violent vision of post-apocalyptic Australia. LWLies spoke to him at the Cannes Film Festival, where he also had David Cronenberg’s Maps to the Stars on the docket.

LWLies: David Michôd has said that there’s a very angry man – aka him – at the heart of The Rover. What emotions did you draw from for it and what emotions do you think it conjures?

Pattinson: It definitely conjures a lot of dread and anxiety but it was the character I was reading from. Also the first thing I connected to was purely a stylistic thing. Clean writing and also having it so stark. It was so original, even the way it looked on the page.

What did you find interesting about Rey when he first came into your life?

I thought it was quite interesting to read something where you actually can’t tell if the guy’s mentally handicapped or not. I asked David at the beginning in the auditions whether he was or not and he was like, ‘I don’t know. Maybe’ and then we established that he was someone who has  just been really severely bullied or someone that has been told that he’s mentally handicapped his whole life but it’s more to do with confidence. He’s really shy and people around him, his family, are really rough and have been slapping him around his whole life and so he’s decided that he can’t be his own person. He’s never even attempted to think for himself or speak for himself or anything. It was interesting, the only time when he is his own person is when a horrible man forces him into it.

He goes from being the only peaceful person left alive to not being that anymore.

I don’t think he even really knows what’s happening. I think you can force anyone to be anything. Eric is trying to make Rey more like him. I guess Rey sort of does become just like Eric in the end. He’s been forced to be someone who he’s not, even though it’s out of his comfort zone. He is better. He can stand up for himself a little more but it’s in this totally backward and weird way that’s completely pointless. And I think Eric looks at what he’s done. He’s created a monster and can see himself for this first time and it makes him reflect. With Rey I was always interested in that dynamic where a husband is beating up their wife and the wife keeps coming back all the time and the worse the husband is the more the woman thinks he loves her and I like transferring that to the relationship of Rey and Eric slightly. I kept thinking that I hadn’t really seen that in a movie. I was kind of looking at it as a love story. There were scenes where I was trying to flirt with Guy.

Was he receptive to your advances?

He had no idea. Neither did David. I said half-way through, ‘You know I’m playing this as a love story.’ In one scene when he was kicking me I tried to put my hand up the back of his shorts. It was cut out of the movie.

Rey has a lot of distinctive vocal and physical traits. Did they come from you or were they something David told you to adopt?

I kind of did it before. It’s a little bit based on my cousin and also just extreme discomfort in yourself. Rey’s spent his whole life trying to hide, even inside himself and in how he’s speaking. He doesn’t want anyone to really hear him. I imagine those little slightly annoying dogs that people have spent their whole lives  kicking away. And he just keeps flopping around chasing after people. He hasn’t toughed up at all. He’s just this floppy, malco-ordinated kid.

I read that Guy Pearce said it was a very heavy atmosphere on set.

Was that not your experience?

No, I thought it was really fun. It was so relaxed. Playing a part like that there are no parometers to it. You just turn up and have no idea what you’re doing every day. You can be loose.

So you had fun in a post-apocalyptic vision of the future?

It was really fun. Just being out in the middle of nowhere. Also the crew was all staying in the same place and you never normally get that. As an actor, you usually go to an unfamiliar city but then everyone else lives in the city so they go home and you just go back to your hotel and it’s lame but this meant I was able to hang out with everyone else. It was amazing. It was really fun. I had such a good time.

Where does it rank in the fun movie shoots of your life scale?

Very, very close to the top.

Probably the first movie I ever did. Being 16 or 17. They give you your own apartment and stuff. Shooting in Cape Town. It’s probably why I’m still acting. It’s ridiculous. How did this happen?

How do you find this experience, the media circus that you have to perform in that goes along with being an actor?

It’s so weird. I have such a disconnect. It’s really strange. Especially here in Cannes because I’m always so hungover. It was the Maps to the Stars premiere last night and we went to the after-party. I keep forgetting I have to work. Yesterday I did a whole day of interviews and I literally can’t remember a single thing I said. I start panicking at the end of sentences and thinking, ‘I can’t remember words.’

It must be weird having the expectation that you must make sense at any given moment in time.

I know! At the Maps to the Stars press conference everyone was so articulate. And I was like [makes noises] the De Niro style of doing interviews. I can’t think quickly enough. I need to plan my answers. It’s amazing how articulate most actors are. Evan [Bird] is like 13 and I’m thinking, ‘How are you answering? This is your first ever interview!’

I find that with interviews I did have a lot of fun at the beginning because I didn’t realise that anyone actually read them. So there’s no responsibility whatsoever. You’re basically trying to tell jokes and then you realise that people remember and it’s written down and they ask you about it after and then you start to close down.
Also you don’t really want people to know who you are. It’s just the worst thing that can happen for an actor. It’s not even about them knowing who you are. It’s just saying enough stuff to make people think you’re a certain kind of thing. When I first started I had so many problems with people thinking, ‘Oh he’s just a private school English kid.’ No one wanted to put me in different parts because of that. Now people don’t even think I’m English anymore and that’s the Twilight baggage and I’m just coming out of that now. But it’s weird. It’s funny how things change. It’s like four years of having one public persona.

You’ve done a pretty good job of turning around perceptions. I was looking at what you’ve got coming out, and Werner Herzog was there. Does he direct in that extraordinary monotone?

Yes, it’s ridiculous. He’s so funny it’s insane because he wrote the script as well and it’s one of the most difficult scripts. It’s only a small part. I remember my first scene with Nicole Kidman and it’s something about the political situation in Turkey and then Werner comes up and he says, ‘This line is a joke! Say it as a joke! And I was like, ‘What?! What are you talking about?’ And then he just walks off and says, ‘It’s funny, it’s funny.’ Nicole said, ‘Good luck’. But Werner’s great. He’s exactly what you’d expect. He’s got so many amazing stories. On every single story he’s got an insider story.

He’s also got this constant existential awareness that’s quite soothing. I don’t know if you find it soothing?

He’s got this insane confidence as well. I think that’s where it all comes from. He’s got 100 percent belief in himself. It’s a little bit like Cronenberg so you feel fine to say, ‘Yes, I’ll just do whatever you say’

What did it require of you to manoeuvre from the blockbuster super-highway to the arthouse sidepath?

It just took quite a long time. Cosmopolis really changed everything. I’m basically just trying to recreate my DVD shelf from when I was 17. I’ve got my list of 20 directors.

I’ve crossed off like nine just over the last few years! Who else did I wanna get? Paul Thomas Anderson because everybody does; Jacques Audiard, Alfonso Cuarón. I want to do a Godard movie. I’m doing Harmony Korine, James Gray, Olivier Assayas and James Marsh.

You got to exercise your singing muscles in The Rover. Will you be releasing your version of ‘Pretty Girl Rock’?

I’d never heard that song before David played it. I love that Rey would know all the words to that song. One of the more embarrassing things to do is to sit there and listen to it constantly. I’m so bad at remembering lyrics so I just had it playing constantly in my hotel room. It’s so catchy as well. But yeah. I’m definitely going to be releasing a cover version.

What role does music play for you in your life?

Not as much as it used to. I’ve got into a little bit of stagnation with music and I don’t know why. I’ve found a few different people recently but it’s weird how you can just stop listening to music sometimes. I don’t know. I’m trying to get back into it again now. I used to always listen to music when I was on set and use it for inspiration and I just don’t really. I just listen to rap all the time.

When I first realised I really wanted to be involved in the industry I remembered and this is a very, very vague answer and I don’t even know what I’m saying, I remember watching One Flew Over The Cuckoo’s Nest and for some reason wanting to be that character afterwards. Being inspired. Pretending to be something else gives you confidence, even if it’s a false confidence for a second but I think it stays with you afterwards. I remember watching that and watching A Clockwork Orange and they both did the same thing. I was extremely shy when I was a kid. It was that movie that for some bizarre reason had me dressing up as Randle McMurphy. They’re the best mass education tools as well. Oh no, I’m too hungover…