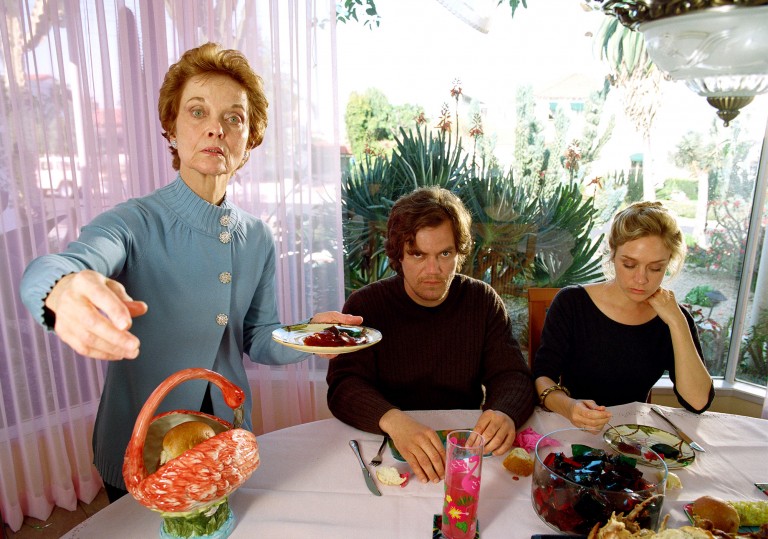 What? He’s done another one? Does he ever sleep?

Unsettling but in a good way.

Will stay with you for a good while.

It’s typical – you wait for ages for a fiction film from Werner Herzog and then two turn up at once. But after the unbridled insanity that was Bad Lieutenant, Herzog has toned down the melodrama to present us with a tale that has a positively unsettling and creepy air.

Based on a true story, My Son begins with the discovery of the elderly Mrs McCullum (Grace Zabriskie), who has been stabbed to death with a sword. Detective Hank Havenhurst (Willem Dafoe, remarkably restrained for once) soon discovers that her actor son Brad (Michael Shannon) is responsible and has barricaded himself in a house across the street. As a potential hostage situation develops, Havenhurst attempts to piece together the events that led up to the crime with the aid of Brad’s fiancée, Ingrid (Chloë Sevigny), and his theatrical director. He soon discovers a man slowly driven mad by a seemingly incomprehensible world.

Herzog once again returns to the themes that have driven him throughout his entire career – obsession and madness. And, as usual, the director is less interested in dealing with the underlying causes of insanity and more with how it manifests itself. He’s well served by Michael Shannon, who gives a powerful and intense performance in the lead role. With more than a hint of Klaus Kinski, his brooding presence and quiet menace continually demand attention. He’s ably matched by Grace Zabriskie, who plays the brittle yet domineering matriarch with an icy calm.

Exec-produced by David Lynch, My Son is certainly redolent of some of his work (particularly in a scene with a dwarf that might as well have ‘David Woz ’Ere’ graffitied all over it): this is Americana as nightmare. While the nature of madness may not be understood, it seems an apt response to a world that is presented as staid, garish and contradictory. Yet, for all its understated dread, Herzog still brings in moments of humour that balance the intensity on show elsewhere.

This is familiar territory for Herzog, delivered with the kind of wit and intelligence that make for a compelling crime drama and intriguing character study.

What? He’s done another one? Does he ever sleep?

Unsettling but in a good way.

Will stay with you for a good while.