The genre maestro’s 1998 Monkey Shines was dubbed ‘An Experiment In Fear’ – and with good reason. 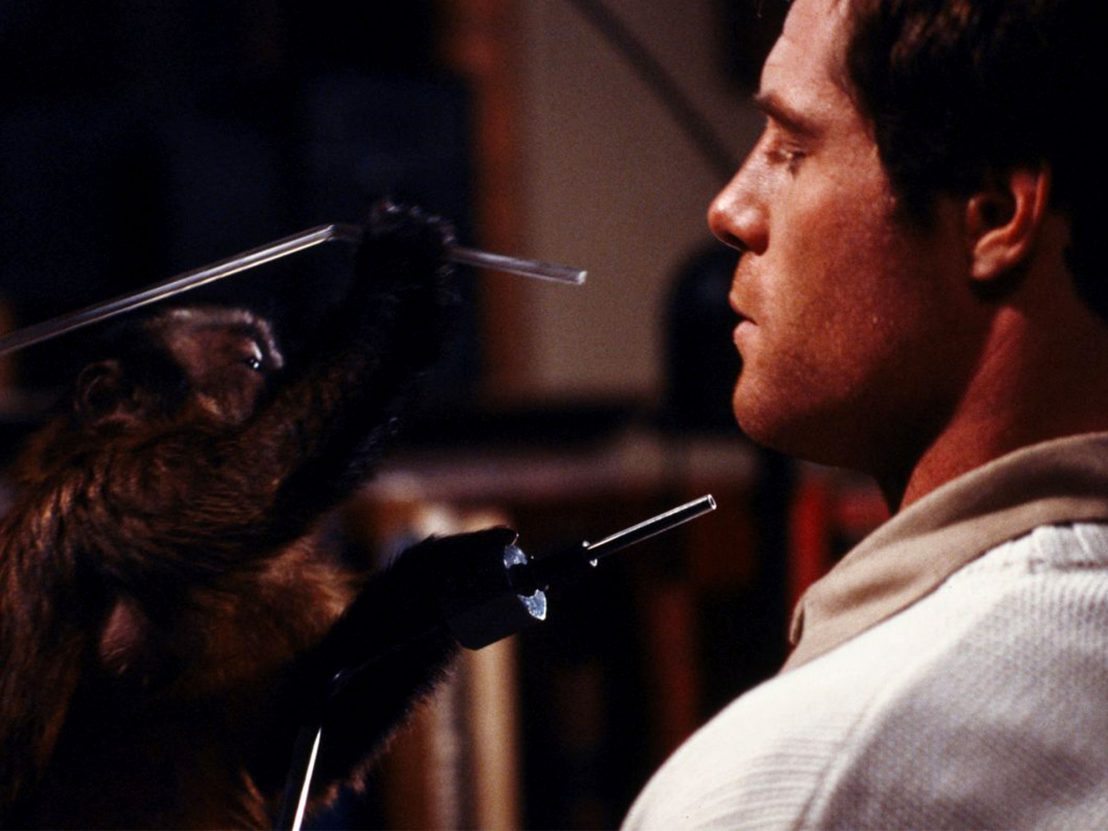 By the mid 1980s, George A Romero was at the very top of the genre game. His ‘Holy Trinity’ of Night of the Living Dead, Dawn of the Dead and Day of the Dead had between them spawned the modern zombie, while reinvigorating horror with sociopolitical allegory. Meanwhile the state-of-the-nation parable of The Crazies, the vampire-in-the-head creepiness of Martin and the EC-aping grisly comedy of his anthology Creepshow all showed a director at the forefront of savvy feature-making that merged creative invention, intellectual rigour and mainstream appeal.

Romero had also, up to this point, remained steadfastly independent – but when he made Monkey Shines in 1988 he worked for the first time with a studio production company, Orion Pictures. The results are something of a hybrid compromise.

In keeping with his surname, Allan Mann (Jason Beghe) is a specimen of humanity and indeed masculinity at its peak. A buff, sculpted athlete as well as a law student, one morning his neighbourhood run ends in an accident that leaves him quadriplegic, losing him his mobility, his girlfriend Linda (Janine Turner), and his perfect-seeming life.

Now wheelchair-bound and entirely dependent on the support of his unprofessional doctor John Wiseman (Stanley Tucci), his grouchy live-in carer Maryanne (Christine Forrest) and his smothering mother Dorothy (Joyce Van Patten), Allan is embittered, angry and desperate. So his one-time roomie Geoffrey (John Pankow) comes up with an alternative to Allan’s suicidal thoughts. A researcher in a university laboratory, Geof has been injecting human brain tissue into capuchin monkeys, and offers his most successful subject as a service animal to Allan – without telling him about her experimental nature.

At first Ella is the perfect companion for Allan, executing, even anticipating, his every desire – but as Allan grows closer to Ella’s trainer Melanie (Kate McNeil), he also notices himself assimilating to Ella both in his aggressive attitudes, and in his dreams (where his mind appears to merge with her fugitive point of view). With Ella enacting Allan’s newly enhanced rage against those around him, Allan realises that in this evolutionary, inter-species battle of wills, it will be Mann versus monkey.

“That’s what the devil is, Geoff, it’s instinct,” says Allan. “Animal instinct. It lives in us all. Lives by its own set of laws. Laws of the jungle.” Monkey Shines offers a strange twist on the Jekyll and Hyde mythos, with Ella serving not just as Allan’s arms and legs, but also as the bestial id to his human ego. Here, as an incapacitated man has his will carried out by a simian slave that is also vying to become mistress, Allan’s internal, psychological struggle is expressed in Darwinian terms, with the least fit struggling to survive.

Dario Argento had previously collaborated with Romero on Dawn of the Dead, and recut it for the international market as Zombi, so it seems fitting that Romero should in turn borrow something back from his friend, here appropriating the evocative image of a pet primate wielding a cutthroat razor from Argento’s 1985 supernatural chiller Phenomena (Romero and Argento would later team up again for the 1990 anthology Two Evil Eyes).

Monkey Shines is perhaps Romero’s best crafted film, replacing the usual scrappiness of his low-budget oeuvre with some very slick production design and incredible animal wrangling. Somehow, though, something gets lost in Romero’s conversion to studio filmmaking. Orion insisted that Romero alter the ending of Michael Stewart’s 1983 source novel to a more upbeat one – and then the studio removed a final twist (available as an extra on this disc) that Romero had added to preserve a note of the ambiguity that has always been the director’s trademark.

Ultimately, the payoff feels neutered, and when interfering Dean Burbage (Stephen Root) complains to his maverick scientist Geoff, “This programme has to start showing results – the people who write the cheques are getting nervous,” you can almost hear in his words the concerns of the production company, breathing down an independent artist’s neck and meddling with his work. They got what they wanted, but in the end the film’s form seems as contaminated and confused as Allan’s animalised identity. As Romero’s work evolved, that former scrappiness was missed. Still, before its disappointing dénouement, Monkey Shines is a very tense thriller concerned precisely with one man’s struggle to tame his older, wilder instincts.

Monkey Shines is released by Eureka in a dual format Blu-ray and DVD on 8 October.