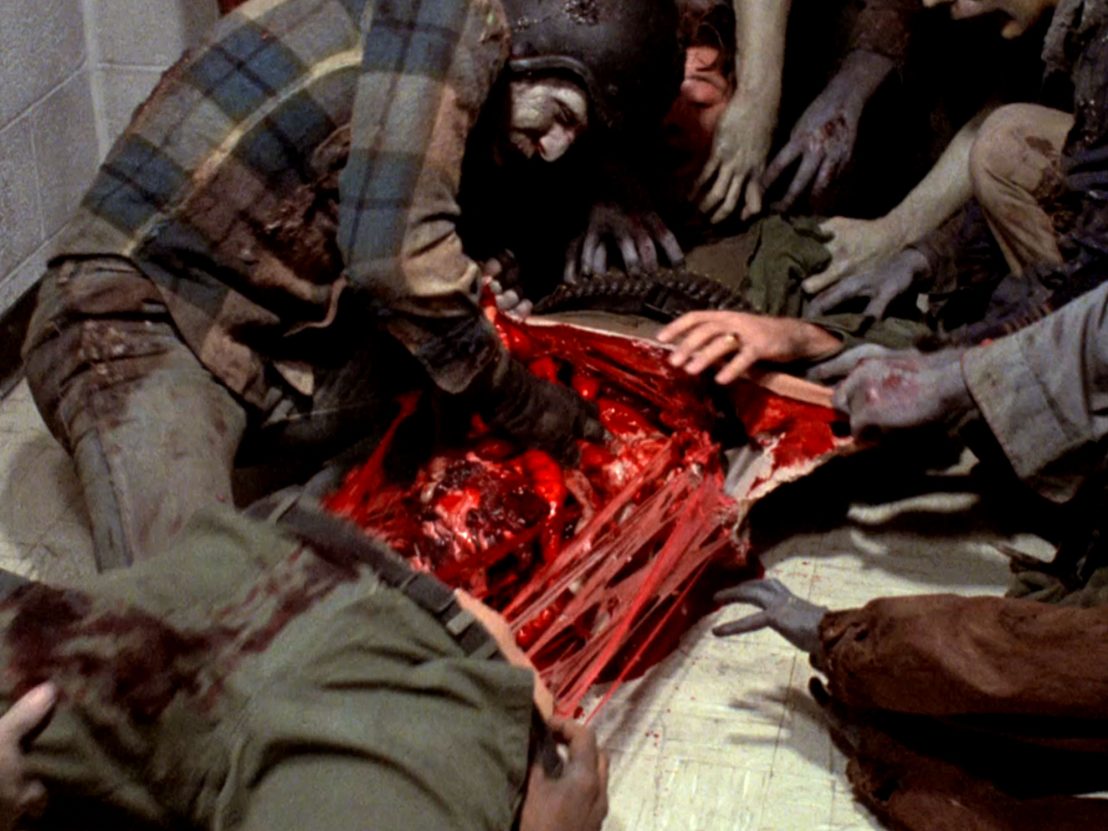 As a teenager, horror films were my home. They were a place to take refuge, a place to indulge myself and rewind, pause and stop images of bodies. As a 29-year-old adult, I still go back to the films of George A Romero because they hold a memory of who I used to be, of what I used to do.

From the ages of 12 until I was nearly 18, I had an eating disorder. I couldn’t swallow food. I would chew it up and spit it out into my palm, the balls of food placed in my pockets and flushed down toilets, put behind radiators, out windows. I was inventive with the disposal of food. And so the dinner table became a sort of horror film in itself, where dinner was a gruelling torture session of watching others swallow.

So I retreated. I would go to my bedroom and watch films for hours on end on a small 15-inch television set with VHS combo.

So much has been said about Romero’s Living Dead films that perhaps I’d be retreading old ground by telling you what so many others have already. But I was always less interested in the social commentary aspect of these films and more by the bodies and the gore. I felt I didn’t have time to consume an entire narrative. I had to consume only the essentials: guts being torn from someone’s rib cage; a neck being chewed on; the top of a zombie’s head being sliced off by a rotor blade.

In many ways, my eating disorder not only frustrated me but also made me incapable of consuming cinema in a traditional way. There were no beginnings, middles or ends: I started wherever I wanted. I moved through the narrative like I was convulsing: forward-winding and rewinding, forward-winding, rewinding, pausing and focusing on fragments. Becoming fixated on paused faces and paused guts; noticing things that had no bearing on story but felt like a secret knowledge, access to a world I had control over.

I remember seeing the ending of 1978’s Dawn of the Dead for the first time. As the shopping mall is overrun with zombies and bikers, Romero begins to ramp up the violence into something similar to an orgasm. I used to pause and watch how the consistency of the skin was like that of a deflated balloon as the zombie’s pierced their fingers through and tore the biker’s guts out.

In many ways, Romero made a film that spoke to me as somebody who did not eat solid food. As a young teenager who put food in his mouth but didn’t benefit from it in any way, I was the zombie.

But it was the restorative power of gore that made me conscious of my body as something that could be trained to overcome my problem: the screen body being taken apart was like a table of contents to me, like a book to be read. I couldn’t digest the entire film, so here I was with scenes and moments, deaths and dismemberments, watching bodies “being taken apart” and, in my own head, taking myself apart and hoping, like Seth Brundle in The Fly, I could put it back together again.

Dawn of the Dead and Day of the Dead are, to me, films of hunger and the frustration of bodies. Both films are filled with images of zombies eating and even now it seems strange that for a teenager who did not eat, I seemed to be obsessed with a film that was concerned with hunger and eating.

In Day of the Dead, Doctor Logan dangles his hand in front of a zombie and says: “It wants me – it wants food. But it has no stomach.” This was me. I was the same, putting food in my mouth and smiling at the dinner table pretending that I was a part of a family whose bodies worked – but I wasn’t. Like the zombie, I “got no nourishment” from this charade.

But the nourishment was the gore. Revisiting the film today, I still feel that “primordial instinct” that Doctor Logan speaks about. Its ending is, quite literally, a banquet of blood as the zombies overrun the underground bunker and start ripping the soldier’s to shreds. Bodies are deconstructed limb by limb, organ by organ. To me, these scenes were like my very own anatomy lesson, the violence a way of articulating what was absent in my life at the dinner table.

When George A Romero passed away recently, I watched Day of the Dead again and again. While the story is still gripping, I found myself getting into the old habit of pausing and rewinding the film to see the deconstruction of the bodies again and again. These films are home to me, and always will be.