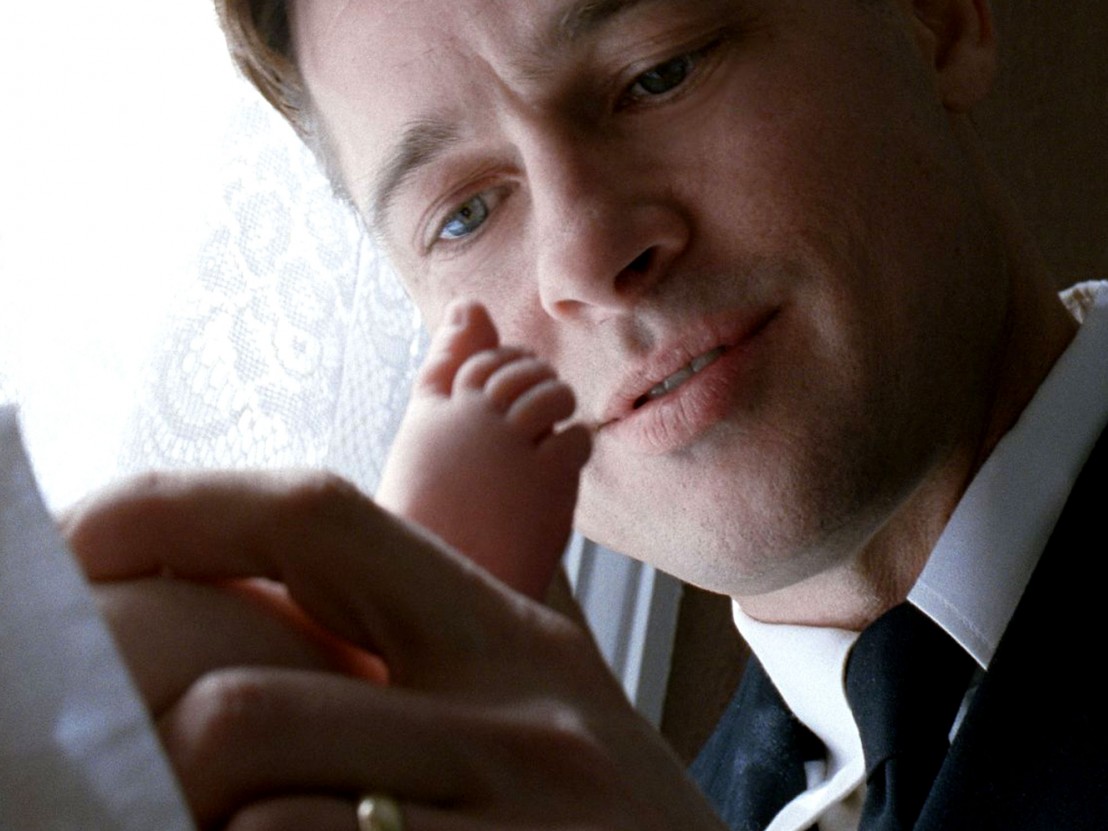 We begin in Austin, Texas in the second half of the 20th century, before flashing back to a time when all matter in the universe exploded outward in a radiance of creation, forming the earth and all living things, including a confused prehistoric animal, who injures its leg by a river. We move forward again, the earth takes a more familiar shape; we’re in the deserts of the American West, and eventually back to Austin, where our narrator mourns a premature death with mixed empathy and survivor guilt in a profound display of interconnectivity.

Only this isn’t a brief summary of Terrence Malick’s The Tree of Life, but Danish author Peter Adolphsen’s 2006 short novel ‘Machine’. An English-language version of ‘Machine’ was published in 2007, around the time my girlfriend was indulging her wanderlust by reading all the translated Scandinavian literature she could get her hands on. I was interested by her description of ‘Machine’: the book is one of those stories that follows a particular object through space and time as it interacts with different objects and people, each opening up into its own distinct, digressive world, and I probably thought it was a neat, familiar metaphor for the web of life.

I had seen The Tree of Life when it came out in 2011, and when I picked up ‘Machine’ two years later I had a vague inkling that the novel and movie had a similar hook: the ancient past and familiar present, together in a chain of causality. But my pulse quickened as I began to read. Like many small-press authors, Peter Adolphsen maintains a very active social media presence, and had friended my girlfriend on Facebook after she reviewed ‘Machine’, though they’d never actually spoken. I sent him a message to ask if he’d ever seen The Tree of Life. He hadn’t.

Over email, Adolphsen describes ‘Machine’ as “in the genre of tingseventyr (fairy tales about objects).” After a brief overture, the novel, which you can read in about an hour, starts at the very beginning: the Big Bang – the expansion of time and space outwards from a single point, and the formation of the elements and everything else, “from amino acids to galaxy clusters.” The same quantity of matter has always existed, writes Adolphsen, in various recombining forms, and it is one particular piece of matter that ‘Machine’ follows.

A prehistoric horse (a mammal from the Eocene period, not a dinosaur), spooks at a watering hole, runs away, falls off a cliff, and dies. Cellular decomposition, putrefaction and the heat of the earth take their course – over several million years and a couple of pages – and the matter that had once composed the animal’s heart becomes a single droplet of oil, which is extracted in the 1970s from the Utah oilfield where an Azerbaijani immigrant named Jimmy Nash works. It is eventually pumped into the gas tank of a Ford Pinto, turns to engine exhaust, and is inhaled by the car’s owner, who, some decades later, shows up on the narrator’s doorstep coughing up blood – dying of cancer spread by that very particle that was once something else’s heart.

Adolphsen tells me that though he’s eager to see The Tree of Life, he was previously unaware of its similarities with his book. I have not reached out to Terrence Malick to ask if he’s read ‘Machine’, but it’s widely reported that he had been developing a project about the origins of life since the late 1970s. By 2007 the idea has taken shape in a script incorporating elements inspired by Malick’s childhood in Austin – where he grew up as the oil-rich grandson of Syrian and Lebanese Christian immigrants – and the lingering emotional wound left by the suicide of his younger brother in 1968. This personal tragedy informs the world-weariness of Sean Penn’s character in the present-day scenes that bookend The Tree of Life, as well as that of Christian Bale’s protagonist in Malick’s latest, Knight of Cups.

“I guess it’s a coincidence, a nice little one,” Adophsen says. “I think that many more than just Mr Malick and myself have done the Big Bang thing in some form or another; we’re not the first, won’t be the last. The birth of the universe is naturally a recurrent theme. It’s the end station for the train of where-do-we-come-from questions.”

In ‘Machine’, Adolphsen writes that, “every single one of the countless events in the universe originates from the very first coincidence, which ripped the nothingness prior to the Big Bang out of its original stability. Why is there now something rather than nothing? Science says: because of an impurity in the nothingness – a trace element, a ripple – a submicroscopic spot appeared in infinity.” Of trace elements, ripples of something radiating through time and space, Malick has something to say as well. In his 2007 draft of The Tree of Life script, Malick describes the film’s famous dinosaur sequence, in which the history of time leading from the formation of Earth up to a ’50s Texas childhood pauses as a carnivorous dinosaur approaches a wounded herbivore where it lays by the water:

Reptiles emerge from the amphibians, and dinosaurs in turn from the reptiles. Among the dinosaurs we discover the first signs of maternal love, as the creatures learn to care for each other.

Is not love, too, a work of the creation? What should we have been without it? How had things been then?

Silent as a shadow, consciousness has slipped into the world.

Both ‘Machine’ and The Tree of Life link the life and death of a prehistoric creature to a life and death in 21st century Texas via the unbroken thread which runs through all things. It sounds loopy, but the coincidence reminds us that Malick does not come by his loopiness idly – and when rubbishing his movies it’s worth remembering that they’re part of a distinct, articulate tradition of thought.

With Knight of Cups set for theatrical release in the UK on 6 May, you may be aware of the criticisms that have been levelled at the film, and at Malick in general. Implicit in many complaints about Malick’s films is the idea that one blade of grass blowing in the wind, or achingly plangent sentiment, is just like another. That his famously open-ended, exploratory filming style has failed to adequately define its search parameters, and there is after all no reason why anything in a Malick film must necessarily be this and not that. That he is a “seeker for he knows not what,” as the dour Nathaniel Hawthorne described his neighbour, the American Transcendentalist Ralph Waldo Emerson.

In fact, Emerson knew what he was seeking: everything. In his essay, ‘Nature’, Emerson asks, “Who looks upon a river in a meditative hour, and is not reminded of the flux of all things? Man is conscious of a universal soul within or behind his individual life.” For Emerson nature is, as Jessica Chastain says in The Tree of Life, “where God lives” – all the grass and trees and birds and insects reflect without artifice the divinity that courses equally through all matter. The Something that is not Nothing is present in Everything – even in you and I, though urban life and commercial pursuits, like in the Los Angeles of Knight of Cups, might distract us from noticing it.

In the essay’s most famous passage, Emerson describes the transcendence of a consciousness open to nature, “uplifted into infinite space – all mean egotism vanishes. I become a transparent eye-ball; I am nothing; I see all; the currents of the Universal Being circulate through me; I am part or particle of God.” For Emerson, art serves to offer us this blissful communion with the infinite:

A work of art is an abstract or epitome of the world. It is the result or expression of nature, in miniature. For, although the works of nature are innumerable and all different, the result or the expression of them all is similar and single. Nature is a sea of forms radically alike and even unique. A leaf, a sun-beam, a landscape, the ocean, make an analogous impression on the mind. What is common to them all – that perfectness and harmony – is beauty. The standard of beauty is the entire circuit of natural forms – the totality of nature […] Nothing is quite beautiful alone: nothing but is beautiful in the whole. A single object is only so far beautiful as it suggests this universal grace.

This is a bit trippy. Indeed, ‘Machine’, which in its scientific way expresses some Emerson-like sentiments about the common life-force diffused across all things, devotes five of its 85 pages to a single sentence describing an acid trip, in all its time-dilating intensity. “No book in the world is big enough to contain all the thoughts you can think in that period of time,” writes Adolphsen in another passage towards the end of the book, as his narrator sits for 45 minutes in a sweat lodge. “My brain exploded with images, feelings and words, mixing them all up as it visited an infinite number of nooks and crannies from my past, my present and my notions of the future,” he writes, before he is visited by an apparition of the prehistoric horse from the beginning of the novel. It speaks to him in “one modulated sound with myriad meanings, associations and overlapping images,” and tells him what happened to its heart. The book we have just finished reading is the narrator’s attempt to record for us the essence of this vision – or, as Emerson describes the work of the artist, “to concentrate this radiance of the world on one point.”

Many of us have watched as Malick’s camera caresses faces, or cranes upward to see the sun shine through the leaves, and wondered, ‘Why this, now? What purpose does this beauty serve?’ What The Tree of Life and ‘Machine’ both proclaim is that these are the wrong questions to ask. Both works argue that there is nothing soppy or random about them. Not when a prehistoric animal can be a death in Texas that we feel as our own; or when a description of a Hollywood movie can be a description of a Danish novella.

“Science tells us the weirdest shit,” Adolphsen remarks over email. “Like nothing can ever disappear. All matter persists and has been there since the Big Bang.” You may choose to dismiss “the hippie obsession with nature,” as one character in ‘Machine’ does, but you are nevertheless literally made of stardust. “The ancient Greeks called the world Kosmos, beauty,” writes Emerson. The cosmos may be an impossibly grand subject, but in Malick’s films, it is consciously concentrated in choice, and it’s on those terms that we must take him or leave him. Nothing is “merely” beautiful, because nothing can be anything else, and everything belongs. Viewers looking for a through-line in his films may as well trace one across the vault of the sky, a constellation spreading in light years across the sprawl of the universe.