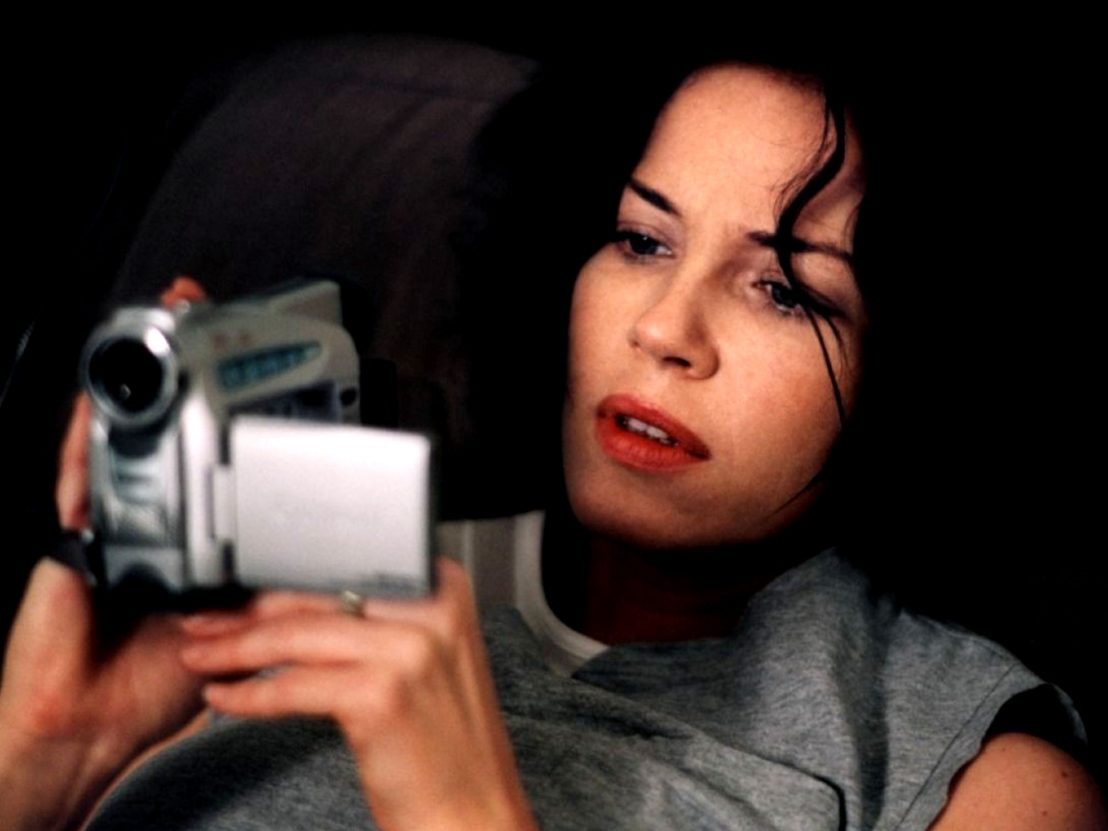 In the cutthroat world of business, Diane de Monx (Connie Nielsen) is in control. We see her, in the opening scene of Olivier Assayas’ Demonlover, seated in first class on a plane besides Henri-Pierre Volf (Jean-Baptiste Malartre), the CEO of the powerful multinational Volf Corporation. Although she is taking dictation from Volk, Diane is nonetheless in the ascendant – literally a high-flyer, not having to sit in economy class like the secretary Elise Lipsky (Chloë Sevigny), and about to replace her immediate boss Karen (Dominique Reymond) after slyly drugging her water.

Diane is poker-faced and impenetrable – an “ice queen”, as one character puts it – presenting a cool gloss that gives away very little of what is going on underneath. Her own inner desires – her lesbianism – remain concealed from others. She seems to fit right in with all the slick, reflective surfaces that make up her working environments: interchangeable office meeting rooms and upmarket hotels around the world, suggestive of anonymous professionalism and depersonalised success.

It is a game of deception and seduction that Diane is playing, gaining the trust of the big boss, always seeming on top of things, and both attracting and intimidating even her experienced colleague Hervé Le Millinec (Charles Berling). As soon as Demonlover’s two negotiators (Gina Gershon, Edwin Gerard) see Diane in action at the conference table, they immediately want to headhunt her for their own business – and they know that they will need to find a way to ‘control’ her too.

‘Control’ is a recurring word in Demonlover, capturing the power dynamics of a film whose office politics play out like the S&M of Steven Shainberg’s Secretary (released in the same year), only with neither the comedy nor the romance. Right from the opening sequence on the plane, there are regularly screens visible in the film’s backgrounds that display moving images of violence or sexual violence – screens that, if noticed at all by the film’s characters, are viewed with dispassion.

This means that if, as rumours have it, Demonlover are also behind the strictly illegal real-time interactive SM website The Hellfire Club, Volf Corporation must be removed from any association with it. Yet as Diane investigates the website, and sees for herself live footage of on-demand torture being meted out live to captive women in fetish costumes, the film’s metaphors – all the inequalities and masks and manipulations of the workplace – are given a very real, far more alarming form, revealing the screen from its other side.

Diane is very good at both her job for Volf and her duplicitous mission for her other employer, but she is also surrounded by others playing similar games, and the gradual loss of her characteristic control, as she is subjected to humiliation, violation and worse, grimly expose to view the lack of real female power or agency in a world where boyish men pull the strings and direct the gaze. Diane, it turns out, is also commodifiable, also reducible to the status of an object, also a mere plaything for casual, indifferent, barely engaged users.

This is what makes Assayas’ neo-noir, criss-crossing from Paris to Tokyo to the Mexican hinterland, morph slowly into a very adult, intellectual precursor to Eli Roth’s Hostel, as the film’s clean, sleek surfaces give way to an underlying mess of ugliness and depravity.

Choreographed to the jet-lagged jangle of Sonic Youth’s guitar work, Demonlover uncovers the human misery behind cold commerce, and the harrowing reality beyond male fantasy. It is a deeply probing work that holds up a mirror not only to the workings of modern globalised capitalism, but also to itself and its own presentations of sexual violence. Our enjoyment, as consumers, of the film’s challenging entertainments is perhaps just part of our own DNA, or of dark sadomasochistic urges that drive us all, even against our will. That said, this brilliant, bleak work is definitely not for everyone.

Demonlover is out now on Blu-ray by Arrow Films in a brand new 2K restoration of the 121-minute director’s cut, approved by Olivier Assayas.