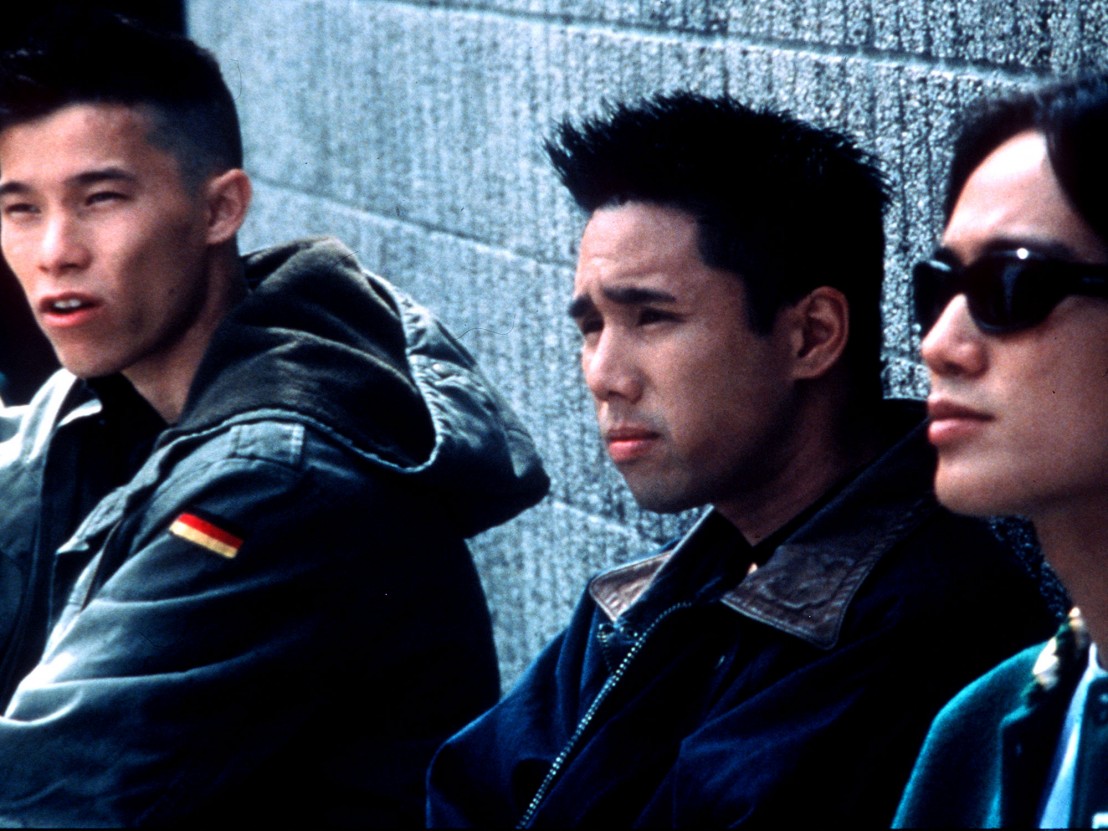 Like so many American coming-­of-­age films, Justin Lin’s 2002 film Better Luck Tomorrow begins with a lull. Ben Manibag (Parry Shen) and Virgil Hu (Jason Tobin) are lying on the grass when they’re interrupted by a ringing pager buried somewhere beneath them. A close-­up shot reveals the pager, attached to a decaying hand, covered in dirt and worms. But unlike the detached ear in Blue Velvet or the dead body in Stand by Me, the hand is not an invitation into the mystery lurking beneath this small town. The pager and the hand belong to Ben’s rival, Steve Choe (John Cho), star of the Academic Decathlon and boyfriend of Ben’s longtime crush, Stephanie (Karina Anna Cheung). Rewinding to four months prior, the film beckons the viewer into a mystery that Ben and Virgil would rather forget, one of teen angst, suburban aimlessness and a panicked search for identity.

Ben is a Filipino­-American high schooler whose day-to-day consists of mastering SAT words, participating in various after school clubs, and playing on the school basketball team. His life is defined by perpetual boredom, the dangling carrot of graduating to college the only tangible means of escape. “All that studying finally pays off,” his friend Virgil says, only because it means, “you get to leave this hellhole early.” Through Ben, Lin imagines an Asian-­American identity dependent on both living up to and maintaining an image. As an introduction, Ben displays his yearbook photos and framed employee-­of­-the-­month pictures, as if to convince us that he is special and worthy of attention.

However, these images are interrupted by a photo on the front page of the school paper: Ben sitting on the bleachers under the headline ‘Born to Warm’. The story claims that Ben, a benchwarmer, is only on the basketball team to fill an “affirmative action” quota. The photo embodies Ben’s fear that he will never belong, that he is destined to be isolated by his Asian­-Americanness. The film gathers pace as he reactively attempts to build a new reputation as a “bad” kid, who deals drugs and cheat sheets with his “gang” of Virgil, Daric (Roger Fan) and Han (Sung Kang). Yet even his downward spiral feels like a performance for the viewer, a desperate plea for attention.

Making matters worse is Stephanie’s boyfriend Steve, a rich, smart and handsome senior. Steve’s entrance overshadows Ben, who shrinks when the two ride off together on a motorcycle. To Ben, Steve is everything he is not, and his every move represents a kick of sand in the face. When he sees Steve drape his arm around a pretty white girl at an academic decathlon tournament, Ben seethes with jealousy. More important than Steve’s betrayal of Stephanie is the fact that he’s not only popular with Asian girls, but white girls also.

Lin’s film functions on multiple allegorical levels, but most interestingly, it is an Asian-­American revenge story – of Ben’s revenge against a standard he cannot help but want, and that he cannot help but fail to be. But just as with most revenge stories, there is nothing to be gained. On New Year’s Eve, a gun accidentally goes off in the garage. The gang’s plan to trap Steve in and beat him up has gone horribly wrong. Before he can stop himself, Ben grabs a baseball bat and swings, making contact. Virgil, Daric, and Han stare at him wide-eyed, their faces now spattered with blood. Again he swings. And again, allowing his fear –­ of failure, of perfection, of his own nothingness ­– to consume him. Returning to the present, we find Ben and Virgil gawking at Steve’s pager. Stephanie is still calling, waiting for perfect Steve to come back; though Steve is dead, his image lives on. Ben continues to try, aiming for the one day that the world will turn around and see him, a regular Asian­-American nobody.

The fight for Asian-­American representation often dangerously implies that Asian­-Americans have to be somebody – with notable qualities or achievements – to be acknowledged as “positive” representation. But as Lin has said, “a lot of people misconstrue ‘positive’ to mean noble and flawless characters, but ‘positive’ should really mean three­-dimensional characters.” So while the battle against whitewashed superheroes, cyborgs, pilots and mystics goes on, the Asian-­American nobody, whose life is mundane and whose identity is indeterminate, is pushed aside as a lesser priority. But what if Asian­-Americans are not so different from the rest? What if, like every other loser hailed in American cinema, they’re the same as everybody else: formless, complicated, messy – human.

According to Lin, Better Luck Tomorrow is “a coming-of-age story about the loss of identity.” Ironically, the genre itself imposes a certain standard of who gets to come of age, and how. There’s a long tradition of American coming-­of-­age films, from Rebel Without a Cause to Me and Earl and the Dying Girl, placing expectation on the viewer to justify the “bad” behaviour of white protagonists with their “good” intentions. When the kids in Palo Alto drive into walls, we’re expected to feel sorry. When Mason in Boyhood tries LSD for the first time, we’re expected to celebrate his recklessness. These moments are moving, because even though they’re nobodies, with unclear futures and murky morals, they are our friends.

Within this tradition, Asian-­American kids become unfamiliar strangers. If not ignored altogether, their uniqueness is reduced to a list of traits. Cool, dumb, smart, rich, poor. Good, or bad. Those who become staples of pop culture, like Long Duk Dong in Sixteen Candles), Data in The Goonies, Trang Pak and Kevin G in Mean Girls, or Margaret Yang in Rushmore, fit comfortably within the margins. When these details are moulded and twisted, audiences can only feel betrayed, as evidenced by the aggressive reactions to Better Luck Tomorrow’s upon its release – including one white viewer who questioned how “[Lin could] do this to the Asian-American community,” but also from Asian viewers, who criticised the film for its violent subject matter and depiction of “bad characters.”

Tellingly, investors originally wanted Macaulay Culkin for the role of Ben. Lin refused, and lost two million dollars in financing, moving on to directly challenge the notion that Asian-­American identity can be so easily compartmentalised. Better Luck Tomorrow forces us to accept some uncomfortable truths about Asian­-Americans. The ways that we, too, are unremarkable at our core, yet deserving of understanding. The film’s core message is not that we don’t make sense, but that we shouldn’t have to.