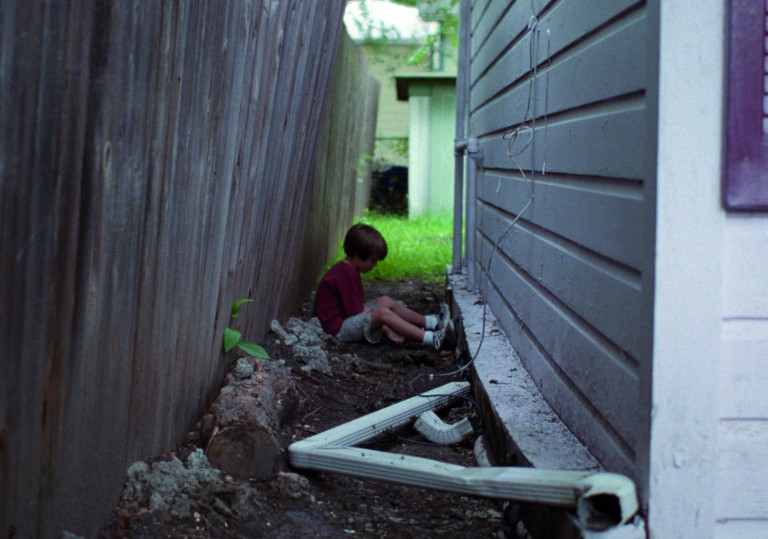 A Richard Linklater passion project which has long been bubbling in the backdrop.

Wistful, nostalgic and judged to perfection.

Could reveal itself as Linklater’s defining cinematic statement. One we’ll be watching 12 years down the line.

Nearly half of Richard Linklater’s 17 features have been shot primarily in Texas, from the faux-groggy minimalist road trip of 1988’s It’s Impossible to Learn to Plow by Reading Books to 2011’s Bernie, a micro-specific portrait of small-town east Texas contextualised by an illustrated lecture on “the five states” within the state.

Linklater hasn’t released a movie shot in his adopted home base of Austin since 2004, where the to-be-Rotoscoped source footage for A Scanner Darkly was filmed. Boyhood, in that sense, marks a very personal homecoming. Production on the film took place between 2002 to 2013, beginning just as Linklater went mainstream (to everyone’s satisfaction) with School of Rock, before continuing on through the most professionally frustrating period of his career.

2005’s Bad News Bears remake effectively terminated his Hollywood sojourn; a patch of lukewarmly received follow-ups culminated in 2008’s Me and Orson Welles, which took a formerly improbable year-plus to get an American release, Zac Efron affiliation and all. Even a presumably sure thing like a proposed “spiritual sequel” to Dazed and Confused (same vibe relocated to a 1981 college campus during the first week of the fall semester) couldn’t attract financing. Returning more-or-less annually to Boyhood ensured continuous directorial practice, a chance to refine technique despite an unjustly rough second act.

Urban centre Houston, state capital Austin, the unprepossessing college town of San Marcos and rite-of-passage site Big Bend National Park are the main locations for the growth of Mason (Ellar Coltrane), an initially unexceptional suburban moppet turned glowingly-tanned college freshman. 35mm was chosen to ensure technical continuity over the 12-year arc, and the ever-so-slightly heightened colours and a saturated gloss confirm it. The uninterrupted visual continuity mirrors Mason’s readiness to intuitively understand and inherit the world he grows into.

Linklater’s past attempts at heavy drama have generally been deadly (two mediocre play adaptations in 1996’s SubUrbia and 2001’s Tape, plus the Shirley MacLaine sequences in Bernie), shot with the pained resolve of someone who would rather be filming anything else. Watch deleted scenes from Dazed and Confused and you’ll find a wisely excised argument about the Vietnam War; period-appropriate window dressing becomes shouty text in a sequence that’s both unnecessarily literal and (unavoidable pun unintended) a total buzzkill.

Boyhood also marks the first film since A Scanner Darkly in which Linklater has tackled a semi-conventional narrative. It’s a story fraught with potentially histrionic passages, and Linklater comes out a winner. The first hour pits Mason and mum, Olivia (Patricia Arquette), against new stepdad Bill (Marco Perella), gradually revealed as an uber-macho, psychologically abusive drunk. Bill’s biggest offence isn’t his gradual edging towards physical violence, but in forcing Mason to shave his locks (“now you won’t look like a girl”). This is the section of the film that has raised the most criticism, but Linklater has never been more successful at subtly embedding potentially heavy drama.

There’s a solidly pragmatic reason for this dramatic strategy — Coltrane was simply too young to carry an entire hour’s worth of screen time, and the grown-up drama gives him some cover. It’s also a vital psychological part of his upbringing, instilling a lifelong aversion to all forms of self-righteous babble about how to “be a man”. For his 16th birthday, Mason must spend time with family members who give him his very first firearm and Bible: God-and-guns rural libertarian piety in a nutshell. Mason says thank you nicely and seems genuinely curious about learning to fire the rifle, picking and choosing exactly which parts of his state’s heritage are worth making his own. Part of Boyhood’s design is to be as grandly expansive as its title, but it’s also grounded by the localised specifics of growing up in a state where hold-your-tongue tolerance is a necessity.

Often dismissively pegged as a “modest” filmmaker, Linklater hasn’t proven as congenitally allergic to overt technical ambition or shouted confrontations as his amiable image might attest. By virtue of premise and attendant scale (the ability to leap a decade of memory in under three hours, just long enough to trigger flashbacks when a location recurs), Boyhood places Linklater’s deft control into sharper relief more frequently than usual. His comparatively rare signature show-off shot is a slowly maintained walk-and-talk, pulling backwards from two people as they amble forward, their lazy stride eliminating the need for camera stress. There’s a lengthy doozy in a San Marcos back alley: a sunny stroll between Mason and a girl never seen before or after, ambient weather pleasure given the same weight as the mild, admirably obdurate drama of Mason’s ingrained aversion to any form of authority.

Linklater is not unaware of Big Drama; he consciously pares away all but the most glancing moments of pain. Sustained passages with no meaningful outside forces shape the action — non-productive pockets of time, free from the demands of work or stultifying company — and allow people to stretch out into their most interesting dimensions, conducting bemused interrogations of others or ranting about a personal interest. Mason combines both archetypal Linklater characters, alternately a seemingly passive listener and the one who holds court — his prophetic anti-smartphone speech is a natural to be snipped out of context and passed around the internet. His growth requires him to figure out which mode is appropriate for his current audience (and whether he cares).

Unsentimental compression accelerates time’s passing every 20 minutes. Mason’s voice changes and his skin increasingly glows, his physical evolution just one of the regular temporal markers. Sister Samantha (Lorelei Linklater, the director’s daughter) is equally fascinating, glimpsed in fondly exasperated co-existence; semi-present biological dad Ethan Hawke is his usual Dorian Gray self and single mum Patricia Arquette can barely keep up with them all. “This is the worst day of my life,” she cries when Mason leaves for college: the first time tears have cropped up and the first instance of heavy drama since Bill’s exit, more effective for its unexpected intrusion. All this time she’s been working, paying bills, navigating a series of unsatisfactory partners and trying not to snap at her kids. Meanwhile, her son grew up largely out of sight, a sharp, sudden realisation.

Movies are uniquely suited for intensely registering seemingly non-transformative moments which assume nostalgic gravity when revisited years later. The low-key default humorousness of Linklater’s work and the babbling plurality of voices — not, admittedly, all equally compelling — has given way to a tightly plotted upbringing that is predictably devoid of real threat, the better to concentrate without worry on time’s passage.

No important characters die, and after stepdad Bill exits the picture, it’s delightfully smooth sailing. In the non-finale’s sweet concession to broad comedy, Mason arrives at college, gets baked and heads back to Big Bend, reclaiming the site of father-son vacations as a starting space for college partying with his new roommate and starter friends: life goes vacantly and pleasantly on. Most locations in the film are visited casually, and only once. Returning to Big Bend years later is a rare moment of stability.

It may be even more fun to watch Boyhood a few decades hence just to see how the period markers have aged: whether the soundtrack choices (songs chosen for their popularity, not a curatorial taste indicator) have persevered as radio standards or faded away, whether the inherent datedness of all fashions has become visible yet. For now, it simultaneously functions as a coming-of-age comedy, mother-son drama and nuanced cross-section of Texas life as the state shifts from red to blue, maintaining urgency and a steady stream of performance surprises (and punchlines). Its cumulative impact, triggered by Olivia’s brief freak-out and Mason’s necessarily tough-minded/callous moving on with his inconsequential life, is an embedded shard whose sadness cuts deep.

A Richard Linklater passion project which has long been bubbling in the backdrop.

Wistful, nostalgic and judged to perfection.

Could reveal itself as Linklater’s defining cinematic statement. One we’ll be watching 12 years down the line.