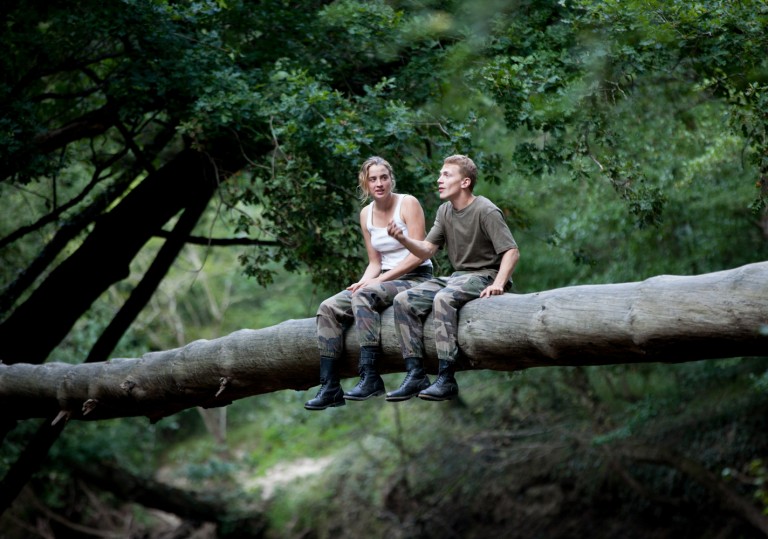 Not an easy sell.

Funny, oddly sweet and uplifted by the wonderful Adèle Haenel.

Thomas Cailley already has his own idiosyncratic cinematic style.

Debut French director Thomas Cailley has served up a Bear Grylls-inspired, absurdity-hued rom-com with impending-apocalyptic undertones that give otherwise grounded events a magical realist gauze. Arnaud (Kévin Azaïs) and his older brother, Manu Labrède (Antoine Laurent) have just lost their dad and are working hard to save his carpentry business. There’s a glorious scene in a hardware store in which a cashier asks whether she should transfer their dad’s loyalty points over to their account. Manu looks at Arnaud in a state of recoil. Arnaud shrugs, “Do it. They’ll be lost otherwise.” And with that elegant logic, the remaining earthly spoils of their father are saved.

The brothers take on a job building a shed for a couple. The couple have a daughter, Madeleine (Adèle Haenel), that Arnaud has already met. He’s already bitten her, too. The bite happened during an army-orchestrated self-defence class. Only the two of them know that he bit her and she gets her own back by tersely tearing down his profession in front of her parents. Azaïs’ panic-stricken rabbit-in-the-headlight looks are met by a hilariously over-boiled glares from Haenel, which is a neat visual shorthand for how the early stages of their relationship play out, thanks to their meet-not-cute.

Arnaud can’t look away and it’s easy to see why. Madeleine is not your average young woman. Her all-consuming life goal is to be admitted into a specialist army regiment. All utterances take the form of tersely informative barks and she stomps around her parents’ tranquil home like a soldier having a bad day at the barracks. Manu and Arnaud watch agog as she packs roof tiles into a backpack before leaping into a swimming pool wearing the backpack. Cailley stretches out the comic beats, finding deadpan humour in between the bafflement of everyone who meets this unapologetically serious beauty.

Madeleine is preparing to survive a disaster. The nature of the disaster that she fully expects to sweep her peaceful seaside town is spelled out over dinner at the Labrède household. “Hunger strikes, religious wars, drought, global warming, inversions of the poles, nuclear plants blowing up…” “We watch TV too,” sneers Manu but the charm of Les Combattants is that the lady’s not for turning. A number of well-choreographed fight sequences show that she’s nifty in a combat situation even if she’s not fully the Commando figure she aspires to be.

Haenel is a consumate joy to watch. Her ingenue appeal is not sexualised with Cailley instead drawing out the power and vulnerability of a woman with conviction. The fact that everyone else thinks that her convictions are batshit crazy provides humour but also fuel the ever-heightening sense that as in Daydream Nation, Donnie Darko and The Craft we are heading towards an abstract, end-of-the-world spectacular.

What happens is too underdeveloped to make sense in its own right however the climax functions perfectly to resolve the relationship arc. Les Combattants plays by its own madcap rules showing via two unusual lead characters how romantic connections involve an acceptance of another’s concerns, no matter how wild these may be.

Not an easy sell.

Funny, oddly sweet and uplifted by the wonderful Adèle Haenel.

Thomas Cailley already has his own idiosyncratic cinematic style.